The technology looks unassuming enough: circular metal plates with multiple holes in them. The plates usually sport a large central hole surrounded by perhaps five or six smaller ones, although there may be anywhere from 2 to 200 openings.

But these deceptively simple devices have won awards and saved millions—possibly billions—of dollars across a gamut of industries. The simplicity, which lends itself to a low price tag and high durability, is part of the balanced flow meter’s charm (Spinoff 2004, 2012), but this is only the start of its list of selling points.

Thanks to a relatively recent partnership, nuclear energy has become the latest industry to begin reaping the benefits that accompany these custom-engineered, perforated discs.

In the 1990s, Marshall Space Flight Center undertook research into using artificial intelligence to manage the health of propulsion systems and plant equipment, with the help of a company called Quality Monitoring and Control (QMC). Among various tools and components needed to gather system health data for artificial intelligence programs was a meter to measure the flow of liquid oxygen in the Space Shuttle’s main engines.

Earlier Shuttle engines had included turbine-based liquid oxygen flow meters, but these were abandoned after one of their blades came off during testing and bounced into the propellant throttling valve, causing a fire that totaled both the engine and the test stand it was mounted on in one of the worst test accidents in NASA’s history. In researching artificial intelligence applications, though, the engineers concluded that, aside from any risks they introduced, the flow meters also weren’t nearly accurate enough to detect significant hardware failures.

In 2001, Marshall and QMC entered into a cooperative Space Act Agreement to split the cost of creating a better solution. There are many different types of flow-meter technology, and plates with a single hole in them had long been among these, but they have definite drawbacks. For example, they cause a drop in fluid pressure and often generate loud noise.

The innovation QMC devised with the help of NASA engineers and funding was to replace the single hole with a carefully calculated series of holes. The company’s software determines the optimal number, size, shape, and placement of the openings, depending on factors like flow rate, pipe diameter, temperature, and the substance being metered.

“Our flow plates cause very little permanent pressure loss, if any, and the accuracy is superior to the best flow meters out there in industry,” says Paul Van Buskirk, who helped invent the meters at QMC and then cofounded spinoff company A+ FlowTek to market the technology.

Marshall worked with QMC to secure an exclusive patent for the balanced flow meter.

“The NASA Technology Transfer Office realized the tremendous industrial implications of this metering technology, and they funded a test program to evaluate balanced flow meter performance in gasses and liquids,” says Anthony Kelley, lead flow research engineer at Marshall and co-inventor of the balanced flow meter.

Earlier flow meters in the Shuttle’s main engines had error margins of about 2.5 percent. Testing showed that QMC’s meters were accurate down to 0.2 percent, even in the harshest environments.

In the years following the partnership, A+ FlowTek has successfully marketed the technology to aerospace companies, chemical plants, refineries, power plants, pharmaceutical plants, and others all over the world. It was named Marshall Space Flight Center Invention of the Year in 2007, and in 2010 it won the Federal Laboratory Consortium’s National Excellence in Technology Transfer Award.

That was about the time A+ FlowTek entered into an agreement with Graftel LLC of Elk Grove Village, Illinois, whose products and services cater to nuclear power plants. This was one industry the balanced flow meter still hadn’t broken into, and one that adopts change slowly and has many of its own strict rules, requirements, procedures, and quality assurances.

“The nuclear industry has about the highest standards you can have,” Van Buskirk says. “Graftel is the only company in the United States that really has the talent to do this.”

“We know the plants, and we know the people,” adds Graftel marketing manager Dave Glover.

With an exclusive distribution agreement for selling the meters to nuclear plants, Graftel got to work building on the technology and adapting it for this market, designing custom manifolds with units to measure pressure change, installing temperature sensors, and creating displays that could operate in high-radiation environments, for example.

After years of rigorous testing, verification, and certification, Graftel made its first balanced flow meter sale in 2013 and has been finding customers around the world ever since.

The company gathers requirements and specifications from its customers and passes them on to A+ FlowTek, which uses its software to generate optimal flow plate designs. Graftel then manufactures, tests, certifies, and helps install the meters.

The major benefit of the balanced flow meter is that, unlike single-hole flow plates and some other flow meters, it causes little to no drop in pressure in the fluid or gas passing through it. This is because it also acts as a flow conditioner, minimizing friction and passing along flows that have uniform velocity and pressure profiles.

“A regular flow plate with a single hole will have maybe 10 pounds of pressure drop,” Van Buskirk says. “That could mean hundreds or thousands of dollars in lost production per hour.” By increasing flow efficiency, the meter pays for itself within weeks when compared to those based on a single-hole plate, he says.

“Balanced flow meters are typically considered a green technology due to the substantial reduction in fluid pump energy requirements,” Kelley says. “One company unofficially stated a savings of $5 million over three years of operation using a $5,000 unit.”

Other instruments commonly used in the nuclear industry, such as ultrasound flow meters, can produce inconsistent results, whereas balanced flow meters are consistently accurate.

It’s also the only flow meter that can obtain accurate results even when placed near a bend in a pipe, which causes flow disturbances, another plus for nuclear plants. “In a lot of situations, the pipes in nuclear plants aren’t just straight—they can be all over the place,” Glover points out.

The flow plates are cheaper than many alternatives, last longer, and are virtually maintenance-free. They are also resistant to the buildup that often plagues other flow meters. “Instead of months, they’ll work for 10, 15 years, probably forever,” Van Buskirk says.

And while single-hole flow plates can reach volumes up to 115 decibels—about as noisy as a loud rock concert—the plates A+ FlowTek designs are barely audible.

“It’s a 100 percent increase in accuracy and pressure recovery and a 10-fold reduction in noise,” says Glover. “It’s night-and-day-type stuff—like going from a Volkswagen bus to a Ferrari.”

The company is working to incorporate a wireless communication system into the flow meters, a concept it pioneered in its work for the Limerick Generating Station in Pennsylvania and which would let engineers read flow data from their desks. The system had to be specially designed to make it impervious to hackers.

“Graftel has really incorporated our plate into a total solution for the nuclear industry,” Van Buskirk says.

Breaking into the nuclear industry is slow work, but the company is beginning to see sales pick up, Glover says, noting that Graftel recently reached an agreement to provide flow meters for all of Westinghouse’s future AP1000 reactors outside of China.

“We foresee a big future with the nuclear industry, and that’s worldwide,” says Van Buskirk.

Abstract
Innovators at Marshall Space Flight Center co-invented a deceptively simple device to measure the flow of liquid oxygen into rocket engines. The so-called balanced flow meter was then commercialized in industrial applications where it has saved millions, if not billions, of dollars in costs. Most recently, Graftel LLC of Elk Grove Village, Illinois, has brought the inexpensive device to the nuclear industry, where it has dramatically increased flow-measurement accuracy, reduced noise, increased safety, and saved on operation costs. 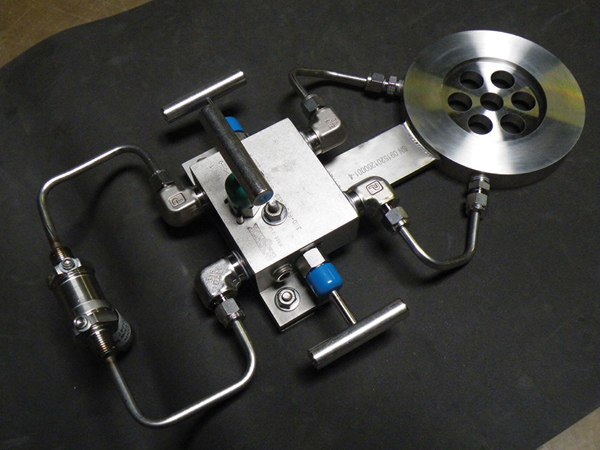 This is a typical balanced flow meter assembly Graftel might supply for a nuclear plant, with a flow plate custom designed by A+ FlowTek and a manifold integrated by Graftel.

Since the early 2000s, balanced flow meters created through Marshall Space Flight Center’s partnership with Quality Monitoring and Control have increased the accuracy of flow readings and improved efficiency in plants across a variety of industries. Since 2013, Graftel LLC has introduced the technology to the nuclear power industry, which has its own strict rules, requirements, and procedures.