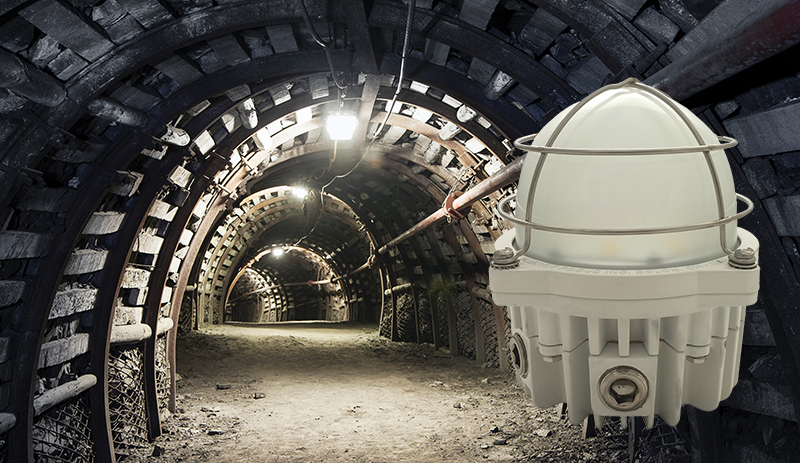 When Stennis Space Center officials wanted to try more energy-efficient lighting in the center’s rocket engine test stands, they couldn’t simply go out and buy the latest LED bulbs. Anything that’s going to share a room with a live rocket engine generating half a million pounds of thrust, 120 decibels of vibration, and temperatures in the thousands of degrees by ejecting hot gases at more than a dozen times the speed of sound, in a process involving flammable liquids and gases, needs some special engineering.

Rocket engine testing requires a lot of light. This is because all tests are filmed with high-speed cameras to monitor performance, but those cameras have to adjust to the bright plume from a firing engine, which would black out the rest of the image, explains Tom Stanley, technical monitor and small business technical advisor at Stennis. “In order to image the engine, we put a whole lot of light on that engine deck.” Traditionally that light has been provided by a host of metal halide bulbs.

Spurred by incentives for Federal installations to reduce energy use, Stennis decided in 2009 to try out LED lighting, which was new at the time but promised significant energy savings. The center issued two Small Business Technology Transfer contracts to Solon, Ohio-based LED lighting company Energy Focus.

With those contracts, the company developed floodlights able to withstand the hazardous conditions in test stands to illuminate engine testing, as well as general area lighting.

Although LEDs are relatively efficient in that they generate far more light than heat, they do still emit some heat, and the hermetically sealed design necessary in a potentially flammable environment made temperature management the biggest challenge to overcome. “You’re putting a whole lot of LEDs into an enclosure and sealing it off and not allowing that heat to dissipate,” Stanley says.

“We successfully overcame that by using an array of heat spreaders that contacted the LEDs directly and were able to extract heat properly,” says John Davenport, who was the company’s executive director and chief scientist at the time, and who remains a senior technical advisor to Energy Focus. The key was a thermally conductive aluminum alloy in a configuration that allowed internal conduction and convection to move heat out through a heat sink.

This advancement subsequently played out across the company’s product line, including its popular LED tube for fluorescent replacements. “If you keep temperatures low enough, you can make these things last indefinitely,” Davenport says.

For the floodlights, the company developed highly efficient optical cones that allowed for less stray light when focusing a beam. “In the commercial world, we now make products that can focus on a flagpole without losing light,” Davenport says, noting that this also improves energy efficiency.

After completing the project, Energy Focus redesigned its general area lighting for lower cost and put out the LED HazGlobe for hazardous areas, as well as explosion-proof globe lights. The floodlight also evolved into a similar commercial product for use in hazardous areas. “It’s not the same form factor or performance as the Stennis floodlights, but it’s the same application,” says Brian Danison, the company’s director of engineering. “People wanted that product, and since we had the experience it wasn’t a huge leap.”

Meanwhile, the original eight LED floodlights have been installed in Stennis’ A-1 test stand, where engines planned for NASA’s Space Launch System have been tested in recent years, and 16 general area LED lights illuminate the center’s E Complex, which is used for testing developmental rocket engine components.

Energy Focus’s LED floodlights produce the same amount of light as their 1,000-watt metal halide predecessors but use less than 300 watts, Stanley says. “We actually have a whiter, cleaner light and a 70 percent reduction in energy.”

Davenport notes that LEDs can be tailored to emit light across the visible spectrum, making them more accurate for scientific imaging purposes and safer for human lighting. LED light resolves fluorescent lighting’s issues of flicker and poor light quality.

LED technology now benefits the company’s other customers. “The Intellitube now has almost twice the efficiency of the first Intellitube we made for the Navy, and part of that was getting the thermals right, so NASA played a role in that,” Davenport says, referring to one of the company’s most popular products.

But the biggest benefit, also partly resulting from better temperature management, is the products’ lifespan, Danison says. While a fluorescent bulb, for example, needs to be changed every few years depending on use, Energy Focus became the first company to offer an unqualified 10-year warranty on its lights.

The hazardous area lights, given their application, carry a five-year warranty. These are being used in oil rigs, paint spray booths, elevator shafts, grain and steel mills, and munitions areas, among other uses.

About 60 percent of Energy Focus’ business is with the military—particularly the Navy—with the rest coming from the commercial market, Danison says. He notes that the company recently replaced 78 units of 70-pound, 1,000-watt metal halide lights on the USS George Washington aircraft carrier with 24-pound, 250-watt lamps.

Energy Focus has retrofitted approximately 450,000 LED tubes across the fleet and on every surface ship in the Navy. In addition to light energy savings, there are also tangible cooling energy savings. Danison notes that a ship lit with LEDs likely dedicates less fuel to cooling because the lights generate less heat than the old fluorescent technology. And because of their long lifespan, a destroyer that had a maintenance crew of 24 sailors dedicated to replacing its 3,800 fluorescent lights is now down to a team of four, he says.

Davenport notes that an aircraft bearing factory not far from Energy Focus headquarters swapped out its old fluorescent lighting for the company’s LEDs in August 2010 and has experienced less than a 1 percent failure rate while enjoying a sharp reduction in headaches among employees. “You would have to fight them to take those LEDs out,” he says.

For all these reasons, Stanley says, “this is where lighting in general is going. We’re getting away from Thomas Edison technology, and we’re moving toward LEDs.”

Davenport notes that it was early Government funding that advanced energy-saving LED technology, making possible a shift from legacy fluorescent lighting. “Having R&D help when you’re in the formative stage, I can’t tell you how important that is,” he says. “These programs, like the [Small Business Innovation Research contracts] NASA and the Navy offer, they have tremendous benefit, tremendous payback.”

Abstract
In an effort to improve energy efficiency, Stennis Space Center issued two STTR contracts in 2009 to Solon, Ohio-based Energy Focus to develop LED-based replacements for lighting in two rocket engine test stands. While crafting floodlights and general area lights, all for use in hazardous areas, the company developed heat-management and beam-focusing techniques that have improved efficiency and lifespan in its other LED lighting, and the work also led to commercial lighting for hazardous areas. 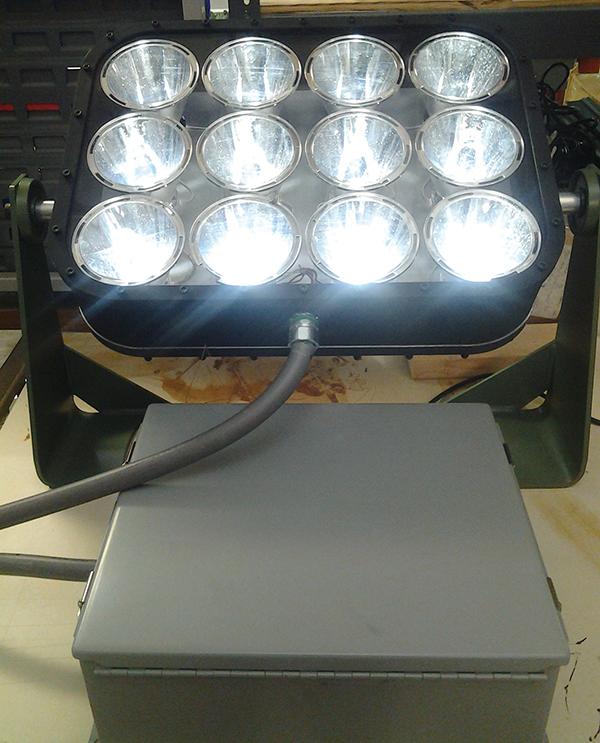 Under contracts with Stennis Space Center, Energy Focus designed LED floodlights that could withstand conditions inside a rocket engine test stand and would not pose a hazard themselves. 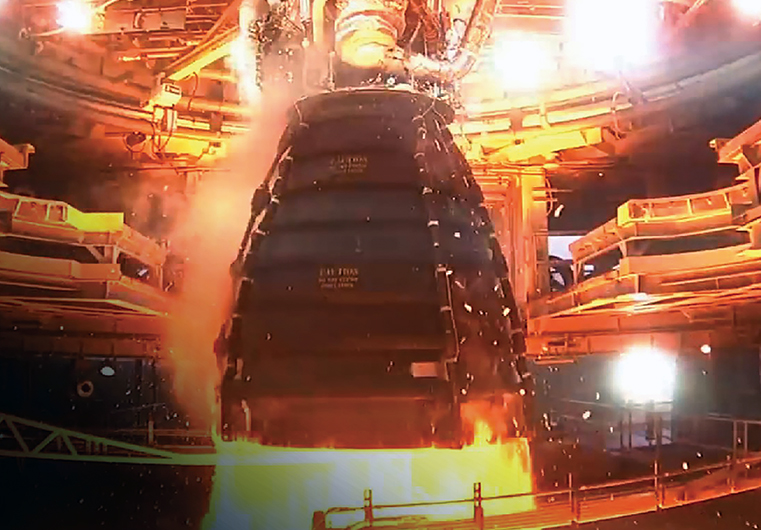 Abundant lighting is necessary for filming rocket engine testing, otherwise cameras will adjust to the brightness of the plume, obscuring the rest of the scene. Traditionally, metal halide bulbs have done the job.

Some of the first lighting designed for hazardous areas was for use in coal mines. Energy Focus now offers more energy-efficient, long-lived LED lighting for hazardous areas, following work the company did to provide general area lighting in a rocket engine testing complex.