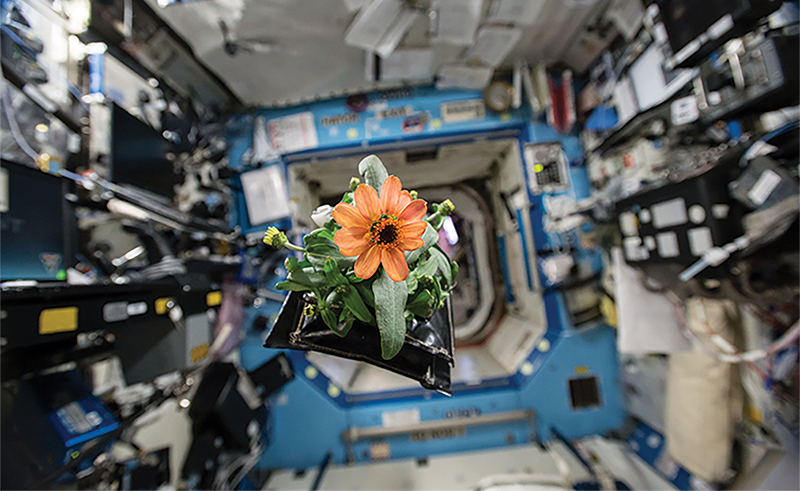 The goal is a fresh and tasty salad on Mars. While other NASA programs are working on getting to the Red Planet, the Agency’s Veggie team is figuring out how to grow salad ingredients in space, vegetable by vegetable, with an interim goal of a salad on the International Space Station (ISS).

“Right now the astronauts are only getting fresh produce when a new supply arrives,” says Gioia Massa, NASA team lead for the Veggie project at Kennedy Space Center. Veggie—the NASA program named for modular growing units designed by Orbital Technologies Corporation—is designed “to be kind of an astronaut garden—and an opportunity for us to do research in space.”

To grow red romaine lettuce on the ISS, NASA scientists teamed up with Sarasota, Florida-based Florikan (Spinoff 2017), a company that had already been working with the Agency to develop polymer-coated, controlled-release fertilizer systems.

“We worked very closely to develop a technology that would work for their hydroponic growing system in space,” Florikan founder Ed Rosenthal says. They couldn’t use the injectable liquid fertilizer that’s typically used in hydroponic systems because water floats in microgravity, and those systems typically require numerous applications, which isn’t practical for astronauts or efficient in general. “We had to be able to deliver single-application nutrients without mixing them in water,” Rosenthal says.

The team developed a way to incorporate Florikan controlled-release fertilizer into the baked ceramic that holds the roots of NASA’s Veggie plants instead of normal soil. The fertilizer released itself over the life of the plants so the astronauts didn’t have to tinker with it. By August 2015, astronauts were eating red romaine lettuce grown in the space station—a significant step. But a real salad needs more than just lettuce.

Flowering vegetables like tomatoes and peppers are the true keys to excellent salads. Although NASA has been testing a Chinese cabbage in the interim, the next plan is to grow dwarf tomatoes.

The fertilizer Rosenthal adapted for NASA’s lettuce crop was his Nutricote 18-6-8 formula, named for its ratio of nitrogen, phosphate, and potassium. Florikan has been selling Nutricote for decades, and Rosenthal has been tweaking it the whole time. But when Massa contacted him about growing tomatoes and peppers, Rosenthal was concerned. “The 18-6-8 ratio is not the right formulation for flowering plants,” he said.

On Earth, farmers might just grow tomatoes and peppers with the 18-6-8 formula and manually add extra potassium. “But that’s not practical in space,” Rosenthal says. Although evidence suggests that gardening can relieve stress even in space, and astronauts have said they enjoy it, NASA’s Veggie support back on Earth still aims to make the process as hands-off as possible.

“You could not possibly expect astronauts to put a little more potassium into the silica, as needed,” Rosenthal says, referring to the silica ceramic that holds the plants in place. “These folks have a lot more important things to do than mixing fertilizer.”

Rosenthal and his team at Florikan came up with a new formula, specifically designed for hydroponically grown flowering plants. The product was similar to the fertilizer that successfully grew red romaine on the ISS, so it was mostly space-tested.

“At NASA, you can change maybe one thing, have one variable,” Rosenthal says, describing the rigorous requirements for space experiments. “So we used the same polymer coating, the same release characteristics, the same nutrients. Now all we had to do was reduce the nitrogen and increase the potassium.”

The result was a 14-4-14 NPK formulation—14 parts nitrogen, 4 parts phosphate, and 14 parts potassium. NASA began using this formula with success in Earth-based preparatory experiments and plans to have the astronauts try it on the space station with tomato seeds in 2018.

Rosenthal has been innovating fertilizer for years. In 2004, he introduced what he called a staged nutrient-release process that won wide praise, including from the National Society of Professional Engineers. That recognition provided him with 40 hours of free consultation with NASA through the Space Alliance Technology Outreach Program.

It was under the guidance of Kennedy researchers that Rosenthal began developing fertilizer with the robust, “NASA-grade” polymer coating he still uses today. “If they’re spraying a polymer on an astronaut suit, it’s got to stand up to high heat and incredibly cold temperatures,” says Rosenthal. “That’s not unlike what we face in agriculture.”

An early version of this fertilizer didn’t hold up in heavy rain, which wasn’t a consideration for space. For earthbound farmers, Rosenthal came up with a polyurethane wax undercoat that successfully resolved the issue. He got three patents out of that fertilizer product—one for the initial staged nutrient-release process, another for the polymer coating NASA researchers led him to, and a third for the wax undercoating that solved the rain problem.

In December 2016, he got another patent for the new 14-4-14 formula that he originally designed for NASA’s flowering vegetables. The formula, which was already being used in Agency experiments and commercial hydroponics on Earth, is the first controlled-release fertilizer to work successfully in vertical hydroponic farming, replacing liquid feed and the need for multiple applications.

“Farmers are finding that really anything that flowers has an opportunity with this formula,” Rosenthal says. “We’re over $1 million in sales and growing.”

Among the earliest commercial adaptors of the 14-4-14 formula was Sarasota, Florida-based Sweetgrass Farm, a fully hydroponic operation that in 2016 began the process of converting to exclusive use of Rosenthal’s fertilizer system. “The plants grown with Florikan controlled-release fertilizer, which was applied only once at the beginning of the growth cycle, were healthy, vibrant, productive, and of exceptional quality,” Sweetgrass owner James Demler said in a statement submitted to the U.S. Patent and Trade Office supporting Rosenthal’s application for the 14-4-14 formula.

Demler also noted that his system now consists of only the controlled-release 14-4-14 fertilizer, in addition to water, seedlings, and the fibrous husks of coconuts, which he uses instead of soil or the baked ceramic NASA requires to hold the plant roots.

Rosenthal worked with Demler to test seed-to-seedling yields using a nano-sized version of the 14-4-14 formula, which involves much smaller granules. “We got just about perfect yield on nearly every seed, including all the NASA varieties,” Rosenthal says. “That’s unheard of.”

NASA has also started testing the nano-formula, which makes it possible to achieve nearly perfectly even fertilizer distribution.

Such precision applications have environmental benefits as well. Farmers don’t have to buy as much fertilizer when they use Rosenthal’s formula because less of it gets lost in runoff that contaminates rivers, streams, and entire watersheds. Florikan has been recognized by the U.S. Environmental Protection Agency (EPA) for its success in reducing excess fertilizing nutrients, twice winning the EPA’s Gulf Guardian Award for reducing contamination of the Gulf of Mexico.

In February 2017, Florikan and Rosenthal were inducted into the Space Technology Hall of Fame, a program run by the Space Foundation to raise public awareness of the innovations arising from space exploration.

“This technology that we developed for NASA Veggie is a better way to grow all sorts of flowering plants on Earth, from strawberries to tomatoes, to peppers and beyond,” Rosenthal says.

And NASA is a few steps closer to its salad on Mars, as well.

Abstract
Florikan’s controlled-release fertilizers had already benefited from a partnership with Kennedy Space Center that generated a more robust polymer coating when Kennedy again approached the Sarasota, Florida-based company looking for a fertilizer to grow tomatoes in space. Flowering plants required a different ratio of nutrients than Florikan’s existing products, so the company developed and packaged a new formula in its signature coating. Here on Earth, it’s the first controlled-release fertilizer to work in vertical hydroponic farming, replacing liquid feed and the need for multiple fertilizer applications. 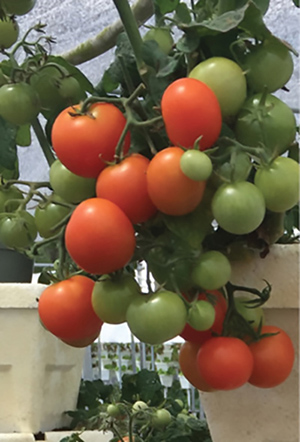 These Red Robin tomatoes, shown growing in vertical hydroponics at Sweetgrass Farms, benefited from a special fertilizer formula developed by Florikan for use in space.

U.S. astronaut and Expedition 46 Commander Scott Kelly shared this photograph of a blooming zinnia flower in the Veggie plant growth system aboard the space station in early 2016. This experiment in flowering plants precedes planned tests of growing tomatoes and peppers in space.