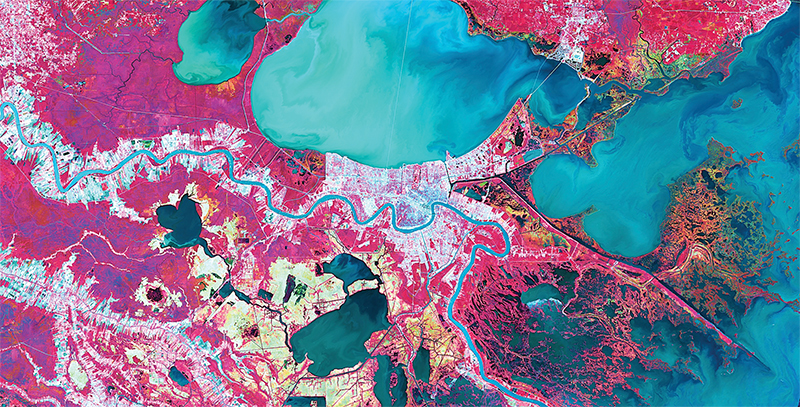 NASA has been taking pictures of Earth from space for as long as the Space Agency has been around—and well before Boston-based startup TellusLabs began using these images to predict corn and soy yields with remarkable accuracy.

In fact, the earliest grainy pictures of Earth from space predate the Space Agency, going back as far as 1946, when a group of scientists and soldiers set a camera to snap a new frame every 1.5 seconds and then mounted it on a rocket they launched from the White Sands Missile Range in New Mexico.

NASA was established a dozen years later, in 1958, and almost immediately began snapping more photos of Earth. Astronauts on the first Mercury missions in the early 1960s got in a few quick shots in their free time, before the Earth-observing program became more formalized and they were trained in terrain photography and equipped with an 8mm Hasselblad camera.

Also in the early 1960s, test bed missions for Apollo—the program that ultimately put the first humans on the moon in 1969—returned with increasingly complete images of Earth from space. Years before the famous Blue Marble photograph from Apollo 17 in 1972, these early images are said to have been the inspiration for the Landsat Program, which, for the first time, launched a satellite specifically to observe and collect data on Earth’s landmasses.

Landsat 1—then known as the Earth Resources Technology Satellite—entered orbit on July 23, 1972, after some rigorous justification to budget skeptics. It was equipped with a multispectral scanner that captured more than 300,000 images before the spacecraft was decommissioned in 1978.

Landsat 1 was followed by numerous successors, including most recently Landsat 8, a NASA collaboration with the U.S. Geological Survey (USGS) that launched February 11, 2013, and is able to collect data in more spectral bands than ever before. That satellite, now operated by USGS, captures images of the entire planet every 16 days, offset eight days from Landsat 7, which has been in operation since its launch on April 15, 1999.

The program itself holds the longest continuous record of space-based observations of Earth. Engineers at NASA’s Goddard Space Flight Center are currently developing Landsat 9, which is scheduled to launch in 2023.

Landsat observations were joined in December 1999 by the Moderate-Resolution Imaging Spectroradiometer (MODIS) instruments, two of which now orbit Earth on separate satellites, covering the entire planet every one to two days and acquiring data in 36 spectral bands. Together, the satellite constellation provides some of the highest-quality Earth images available.

As a remote sensing scientist in Boston University’s Earth and Environment Department, TellusLabs cofounder Mark Friedl has worked on the MODIS science team and has affiliate membership on the Landsat science team. His academic work—often involving or funded by NASA—has included mapping global land cover and seasonal variability in growth.

Using both MODIS and Landsat data, his Boston University teams have developed tools and techniques to map the timing of leaf emergence, fall, and color, as well as growing season intensity. This type of information can be used to understand how weather and climate affect vegetation growth, and it certainly informed the programs he went on to write for TellusLabs.

Through his academic work, Friedl has come to know the Landsat and MODIS datasets extremely well. When Amazon Web Services began offering significantly simplified access to them, making the NASA and USGS datasets widely available to researchers around the world, free of charge, Friedl wasn’t surprised. “They’re hosting the data because they know people will use it,” he says.

“This is incredibly valuable data NASA has been collecting over the years, certainly for science but also for a whole range of applications,” he says. “Increasingly, people are figuring that out.”

For more than two decades, Friedl has been watching as conditions converged to create the unique opportunities of the moment. The quality and capabilities of NASA’s space instruments have improved as historical records continue to get longer. Add to this the huge advancements in computing power and the maturation of data analytics, machine learning, and statistical analysis techniques.

“All that has kind of put us in a different place than we were even 5 or 10 years ago with respect to these types of data and the types of things we can do with them,” he says.

It’s why he and his TellusLabs cofounder David Potere decided several years ago to use space data for what they call geographical or spaceborne insights. During weekends, evenings, and vacation, they built a crop-prediction model that combines current NASA and USGS data streams with historical data and then blends them with a variety of other data sources, including weather models.

In its first year, the beta version of TellusLabs’ initial product, Kernel, consistently predicted final 2016 yields on U.S. corn and soy crops ahead of all publicly available in-season forecasts, the company says.

Kernel projected yields on 2016 U.S. soy crops within 1 percent of the final yields, nearly two months before the U.S. Department of Agriculture (USDA)—September 13, versus November 9. The platform’s corn predictions also steadily converged with the USDA’s final reported yield, ending off by less than 1 percent, at 173.1 bushels per acre, versus the actual 174.6 bushels per acre.

The company was at the top of the 2016 class at MassChallenge, a startup accelerator in Boston that awarded TellusLabs $100,000, in addition to office space, private-sector mentors, and computing resources. In early 2017, the company announced it had raised $3.1 million in seed funding from a partnership of several venture capital firms.

“What distinguishes us is we’re taking the meteorological data and building models that are in some senses similar to more traditional crop forecasting models, but we’re adding the additional dimension of the space-based observation,” Friedl says.

Within a year, TellusLabs already had more than 600 subscribers from a wide range of fields. The key groups, the company says, are large institutional investors, individual investors and advisors, a variety of organizations engaged up and down the agricultural value chain, as well as individual farmers and farming consortia.

“Our thesis right now is that there’s a lot of value in the really high-quality measurements that the Space Agency missions provide,” Friedl says. His academic work with the Agency helped familiarize him with the satellite data that has made TellusLabs possible, he adds.

Abstract
NASA has been enabling and producing constant imaging of Earth’s surface since the 1970s. One of TellusLabs’ cofounders has worked extensively—and often with NASA’s involvement or funding—with this image archive as a Boston University scientist. The Boston-based startup developed a crop prediction model that combines Earth-imaging data from satellites built at Goddard Space Flight Center with historical data, weather models, and other information. Its first product, Kernel, predicted 2016 U.S. soy crop yields with 99 percent accuracy. After a year, Telluslabs has more than 600 subscribers.

In this false-color infrared view of Maui, the large sugar plantations that dominate the agriculture of that island are on view, wedged in the lowlands between the mountains of Pu’u Kukui on the east and Haleakala in the west.

This image, taken by Landsat 8 and processed by TellusLabs, shows New Orleans as it sits along the Gulf of Mexico. Agriculture, largely sugar cane, can be seen along the banks of the Mississippi in light pink and blue. Also apparent are sediment swirls in Lake Pontchartrain to the north and the loss of coastal land south and east of the city.