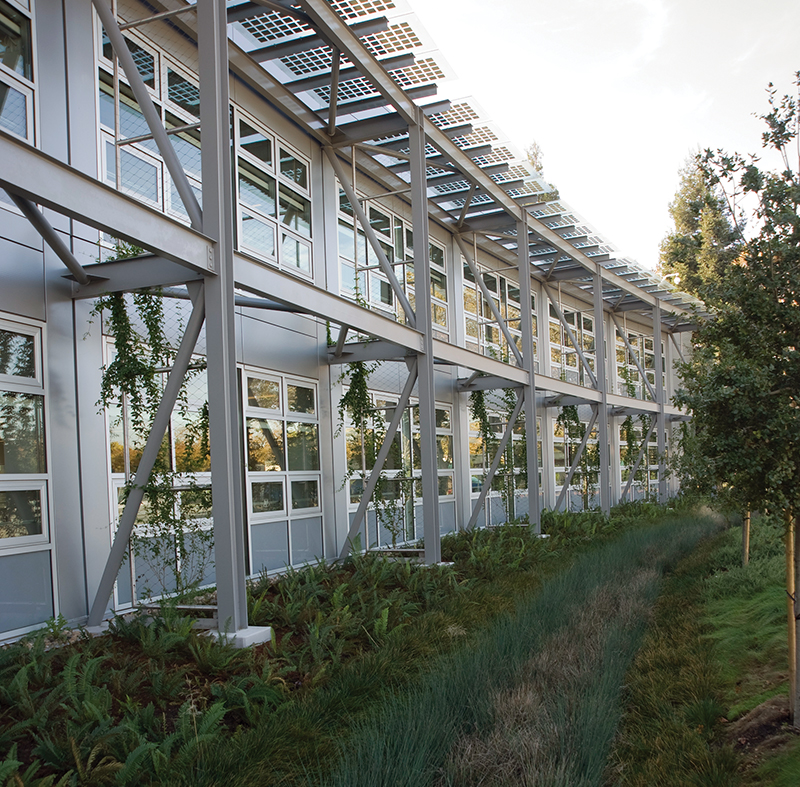 When we talk about “green buildings,” the conversation is generally about reducing consumption. That’s because buildings and their occupants consume lots of energy: people turn on lights and computers, appreciate air conditioning, ride in elevators, and take advantage of any number of other conveniences powered by electricity from the grid.

But there is a flip side to the equation. In addition to reducing consumption, another way to lessen a building’s draw on the grid is to produce renewable energy onsite.

When Ames Research Center won the funding to build Sustainability Base, the most environmentally friendly building in the Federal Government, that was a critical part of the plan. In addition to incorporating all manner of energy-saving technology, from skylights to reduce the need for artificial lighting to cutting-edge climate control systems and more, the engineers also included solar panels, a highly efficient fuel cell, and even a small wind turbine to power the building’s needs.

“Part of the goal was just to be able to show ourselves and show the public that in fact it’s possible, in a building on planet Earth, using modern technology and some NASA aerospace technology, to build a building that can produce more than it consumes,” emphasizes Steve Zornetzer, Ames’ recently retired associate director for research and development, who spearheaded the effort to build Sustainability Base.

To prove that it was really accomplishing what it promised, the building needed a system to monitor what energy was coming in and what was going out. “We went around Silicon Valley at the time”—this was around 2009 or so—“looking for best practices,” Zornetzer recalls.

That work led them to San Ramon, California-based Integrated Building Solutions Inc. (IBS), which was already developing an energy dashboard, a way of quickly visualizing the energy-consuming and energy-saving activities.

“Ames used us as the single pane of glass so we can see the performance and how they are all working as a system. They were talking about air conditioning, lighting, real-time metering, solar-panel system, fuel system, occupancy control, about a dozen different systems,” explains IBS owner Eugene Gutkin. “The goal was pulling the data from their systems, putting it in one interface, and making sure the building is working as efficiently as possible.”

The results are now prominently displayed in the lobby of Sustainability Base, and “typically what it shows in the dashboard is that at virtually any moment, the building produces more than it is consuming,” says Zornetzer.

With help from Ames’ computer scientists, IBS was able to add an important additional feature to its dashboard: fault detection. “It’s a technology we‘ve developed for aerospace and flown in high-performance military jets, NASA planes, and spacecraft,” says Zornetzer.

To detect a problem, the system starts by understanding how a device is supposed to operate, from its temperature to vibrational patterns and a host of other parameters. “Then you monitor the measurement of those parameters in real time, and constantly compare it to the optimal state in the model. Fault detection algorithms enable you to detect when there’s deviation between nominal and actual,” he explains.

With this system in place, the building operators can avoid the expense of unnecessary maintenance but still note when a component is acting suspiciously and replace or fix it before it fails, he says. “Unlike the energy consumption dashboard, this is not something that’s on public display, but it’s something our maintenance people use every day.”

In addition, says Gutkin, the system adds depth to the energy consumption picture: “When something is not working, we’re able to track the cost of this malfunction from the energy perspective.”

To accomplish the project, NASA and IBS signed a Space Act Agreement to share information back and forth. “I don’t think very much money, if any, changed hands,” says Zornetzer. “They saw the opportunity to learn from the experience at NASA and improve their own tech and at the same time provide us something that would be very beneficial. It was win-win for both sides.”

For the fault detection component, in particular, “we met with Ames’ engineers multiple times, and they showed us how their system works,” recalls Gutkin. Using that foundation, IBS was able to build a system tailored to Sustainability Base’s systems, including lighting, the solar panels, various meters, and more. “And once it was built, those engineers participated in the testing, trying to monitor the various components and ensure it would catch problems.”

Today, fault detection is a standard component of the Intelligent Building Information System (IBIS), which has been installed at a number of corporate campuses across Silicon Valley, as well as in other government buildings. Gutkin credits NASA directly with helping the company expand its business.

“Our exposure to NASA, the experience we gained working with them on the diverse systems, helped us to get the trust and the technology that we have used in government jobs and quite a few other projects,” he says.

One project that came almost immediately following Sustainability Base was for the U.S. General Services Administration. Since then, IBS has also installed systems at PayPal, Oracle, General Dynamics, and Intuit, among others.

Like at Sustainability Base, IBIS provides a way to monitor energy consumption of critical building systems, like air conditioning, lights, and renewable energy, while also providing alerts to any abnormalities. “They’re using this to save energy, also for critical system monitoring, so they can have a quick response if something fails,” Gutkin emphasizes.

For older buildings looking to reduce their environmental footprint, IBS notes, its system can provide important insights as well as help various “smart” systems integrate most efficiently. At Oracle, for example, a sprawling campus that includes 17 buildings and 84 acres of landscaping originally built in 1997, the installation of IBIS was part of a two-year sustainability initiative starting in 2015. The results of the campaign, all reflected in the energy dashboard, saw electricity consumption drop 28 percent in the first two years, irrigation water use drop by 29 percent, and annual savings of $3.86 million—a 190 percent return on investment.

Zornetzer says he is pleased to see the work done for Sustainability Base spreading to other government buildings and beyond.

“One of our intentions was to make it an intelligent building and create an environment that would inspire other people to do similar kinds of things,” he says.

Abstract
When Ames Research Center built Sustainability Base, the “greenest” building in the Federal Government, it counted on producing more energy than it consumed. To monitor energy consumption and production, it turned to Ramon, California-based Integrated Building Solutions Inc., which, with help from Ames, also added fault detection to its existing energy dashboard. Today, that’s a standard component of its Intelligent Building Information System, which has been installed at corporate campuses across Silicon Valley and beyond. 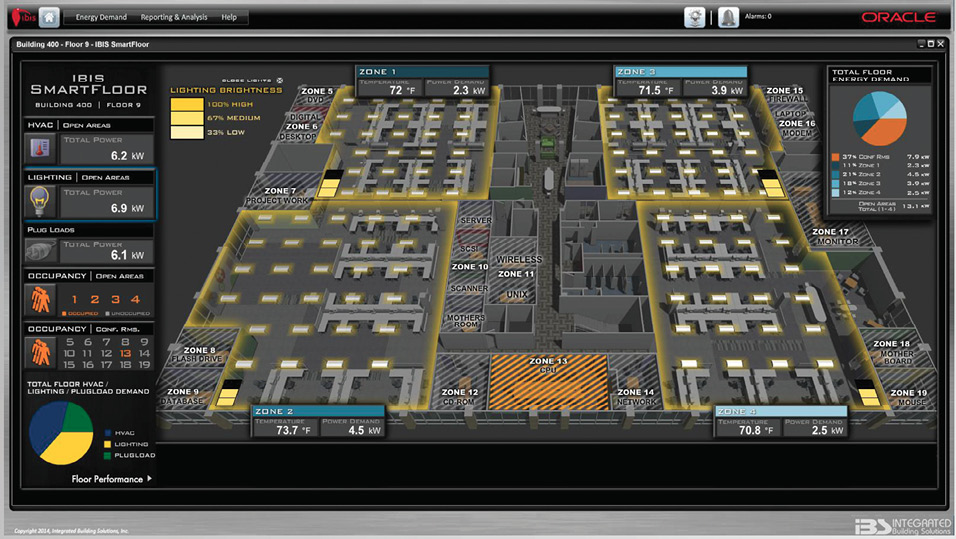 Integrated Building Solutions improved its energy-monitoring dashboard for Sustainability Base and now installs the upgraded system at corporate campuses across Silicon Valley as well as in other government buildings. Among other features, it enables a building manager to look at how energy consumption differs across different zones, even on the same floor.

When Ames Research Center built Sustainability Base, it wanted the building to produce at least as much energy as it consumed. To attain that goal, it included solar panels, a fuel cell, and even a small wind turbine. It also incorporated a monitoring system to show energy going in and out.