Astronauts have been gardening on the International Space Station for years to learn how plants grow in microgravity, with the idea that space crops will one day help sustain humans on long-duration missions such as to the Moon or Mars.

As on Earth, plants in space require nutrients, water, air, and light. Rather than resting in a soil garden bed, space station plants grow in a pillow-like container, which holds a ceramic growing medium with controlled-release fertilizer that provides nutrients over time. The pillow system is designed to be a passive watering apparatus, but astronauts can also inject water directly as needed.

An LED lighting system enables the crew to grow crops independent of sunlight.

Different light color combinations, or “light recipes,” can have dramatic effects on plant size, shape, texture, and appearance. This happens on Earth as well: the angle of the sun in the sky changes the light color and intensity of its rays on the ground, providing a cue for plants to respond to the light environment and adjust their growth to the available light quality. As a result, plants can develop biological rhythms to detect time of day and time of year.

Matthew Mickens, a NASA postdoctoral research fellow at the Kennedy Space Center, investigates how different light recipes affect crop yield, as well as the nutrient content and flavor of plants.

“There is a light recipe that will maximize the yield of a crop, in terms of total edible biomass,” he says, “and there’s also a light recipe we can use to keep plants short—a process known as dwarfing. I’ve observed that when plants stay small throughout their growth cycle, the rate of nutrient uptake is still the same, so they’re actually concentrating higher levels of nutrients within the leaf tissues by staying small. The trick is to find the recipe that balances both yield and nutrients.”

The space station crew members currently use three growth chambers for gardening: two simple Vegetable Production Chambers, more commonly referred to as Veggie units, and a newer plant growth system called the Advanced Plant Habitat (APH), which joined the space station’s Veggie units in the fall of 2017 and was initiated in January 2018.

Like the earlier growth chambers, the APH secures seeds in a growing medium. However, unlike the Veggie units, APH allows users to exercise complete control of the plant’s environment. At about the size of a minifridge, it’s larger than the Veggie units. It’s more automated as well, with many functions driven by a computer on board—minimizing the amount of time astronauts have to spend gardening.

It also has an improved custom-designed LED system that offers a greater variety of light colors and intensities. The Veggie habitats are equipped with red, green, and blue LEDs, while the APH adds white and far-red, a light color between red and infrared barely visible to the human eye but detected and used by plants.

The APH has already been used on the space station to grow dwarf wheat and a flowering plant related to cabbage and mustard, using light recipes and other techniques NASA scientists first designed and thoroughly tested on Earth.

Controlling light for crop growth is also a terrestrial horticultural focus, where there is growing interest in vertical farming—techniques enabling food and other crops to be grown indoors in places like skyscrapers, old warehouses, or even shipping containers. The idea is to establish year-round fresh and local food options in urban and other areas that don’t have easy access to farmland.

OSRAM, a high-tech German lighting company with U.S. headquarters in Wilmington, Massachusetts, has been working on a horticulture lighting solution to improve research in this field through a project headed by Steve Graves, strategic program manager for urban and digital farming in the company’s innovation group.

The OSRAM solution, Phytofy RL, is a tray-like fixture with a network of LED lights, temperature control, and a software-controlled panel to adjust settings. OSRAM has worked with academics and others to design it according to researchers’ needs.

“It turns out that our fixture is very compatible with what Kennedy Space Center is doing to develop light recipes or protocols that might be useful for the Advanced Plant Habitat,” Graves says.

Later in 2017, Mickens and other Kennedy researchers began using a Phytofy prototype provided by OSRAM to conduct ground-based studies and preliminary research for in-space APH experiments. Mickens and the OSRAM team installed the Phytofy in a reach-in growth chamber, and eventually plan to use the lighting fixture in Kennedy’s walk-in growth chambers as well.

Mickens says OSRAM’s device offers choices in light wavelength, which determines light color, that are similar to the APH. “The Phytofy gave us the capability to simulate the Advanced Plant Habitat lighting environment without necessarily needing to go buy a second APH unit.”

Mickens and Graves remained in close communication during what was essentially beta testing of Phytofy, with Mickens offering feedback and describing his research. The exchange with NASA has helped the OSRAM team feel confident enough to sell Phytofy commercially, with an expected product launch in late 2018 or early 2019.

“It’s served as validation,” Graves says, “but we also receive useful feedback from Matt in regards to the research he’s doing. The result is new light recipes for NASA, and we are hopeful that their success percolates into controlled environments on Earth, which will aid our mission to overcome food insecurity worldwide.”

OSRAM is initially marketing a Phytofy solution featuring a configurable lighting system with real-time controls, as well as scheduling capabilities, to plant scientists in academia and in commercial growers’ research and development departments. Graves expects future versions will add additional automation and sensor options to help reduce the large amount of human observation that plant science now requires. All settings can be controlled through a graphical user interface.

While pharmaceutical companies and flower growers have shown an interest in this type of research, much of the early interest is in food crops. Light recipes give growers—in space and on Earth—the ability to affect plants in ways that were not previously possible.

“The use of LEDs provides complete control over the wavelengths—or colors—of light that we use to grow the plants,” Mickens says. “This allows us to strategically alter the plant’s physiology in all kinds of ways.”

This type of plant research, with the help of devices like Phytofy, is laying the scientific foundation for feeding humans on the Moon or Mars—or even back on Earth, where vertical farmers hope to resolve some of the food supply challenges we’ll face in the coming decades.

Graves says the Space Agency’s researchers are consistently on the cutting edge in horticulture and that their work informs OSRAM’s. “They serve as pioneers for the tools that we’re developing,” he says, “and they also provide input into our product roadmap. I hope this is just the beginning.” 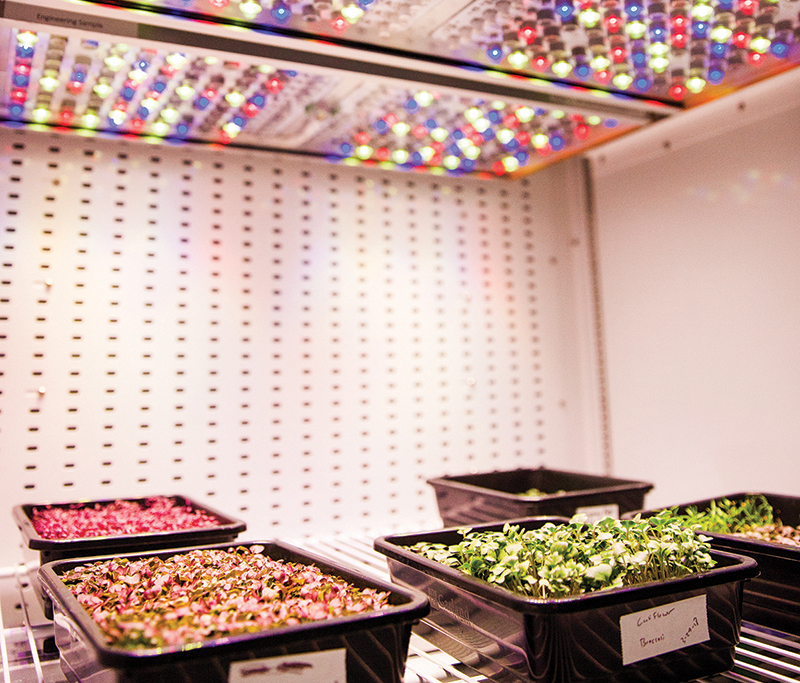 The Phytofy system’s lighting capability and range of choice allow NASA researchers on Earth to simulate the lighting capabilities of the Advanced Plant Habitat, a growth chamber that astronauts began using on the ISS in early 2018.

OSRAM’s Steve Graves (right) and NASA’s Matthew Mickens install a prototype of the company’s LED lighting system Phytofy in a reach-in growth chamber at Kennedy Space Center. NASA is researching the effects that light color, duration, and intensity have on plants on the ISS. Controlling light to affect crops is also a focus of horticulture that stays on Earth, where there is growing interest in growing crops indoors in places like skyscrapers, old warehouses, or even shipping containers.