Around the world, economic growth and prosperity is tied to the availability of cheap energy. Coal is abundant and cheap, but in developed countries the regulations and expensive technology required to control by-products offset its cost savings. It’s a different story in many developing countries, however, where the fundamental need for power overwhelms environmental considerations. There, regulations frequently forgo strict pollution mitigation requirements to keep energy costs low.

When deriving energy from coal, one alternative to combustion is gasification. This technology employs the same heat and pressure used in rockets to reduce some of the pollution, making gasification a safer way to use coal until sustainable sources of power are more affordable.

He explains that a liquid propulsion rocket engine uses fuel and an oxidizer, which reacts with the fuel. Pumped from separate storage tanks into a chamber, they’re ignited and chemically burn. This breakdown and formation of new molecular bonds yields a high-pressure, hot gas, which is directed out of the open end of the combustion chamber and exits though the back of the rocket. The mass of hot gas moving in one direction causes an equal and opposite reaction: thrust pushing the rocket forward.

To accomplish this, NASA and corporate partners relied on computer-aided design tools to create new propulsion systems and precision hardware, as well as sophisticated inindustry partners strumentation. This was particularly helpful when building a new engine for the space shuttle vehicles. They required engines that could generate more power for their size than any thrusters previously built.

Such requirements began testing the limits of design. “If you need a very precise temperature to get the most efficient output of a system, it may also be very close to some limits of the materials,” explains Coates. “Say the material melts at 1,100 °F, and the temperature that you want to run at is 1,000 °F. It’s close. If that temperature varies plus or minus 200 °F that could damage the hardware.”

That potential for damage forced NASA to “get really good at thermal management on rocket engines.” Even though the engines run at temperatures that are well above the melting point of some of their component materials, Coates says that isn’t a problem. “We take a lot of the cold propellants and cool the rocket engine with it before we turn around and burn it.”

“The better you control pressures and temperature, the more useful output you will get from any process,” he adds.

This required constant monitoring to maintain optimum operating temperatures. Employing high-tech sensors and other instrumentation throughout the rocket made it possible to collect measurements and make minute system adjustments on demand.

Numerous commercial partners supported NASA’s efforts to mature, build, and perfect rockets over the years. El Segundo, California-based Aerojet Rocketdyne Holdings and its predecessor companies accumulated a wealth of knowledge applicable to technology used on Earth as it built rocket engines for NASA and others.

The company’s in-house research and development team went on to use that expertise in the private sector. In 2015, as priorities shifted away from entering new commercial markets, Gas Technology Institute (GTI) of Des Plaines, Illinois, bought Aerojet Rocketdyne’s energy portfolio, including intellectual property, facilities, and technology. Many of the researchers followed to work for the nonprofit research, development, and training organization, whose mission is to address global energy and environmental challenges.

One outcome of that effort is a 21st century update for gasification. Tony Eastland, formerly chief engineer for the Clean Fossil Energy Technologies program at Aerojet Rocketdyne and now senior director of energy supply and conversion engineering at GTI, is using his rocket know-how to improve this 200-year-old process.

Converting the energy stored in coal is less damaging with a gasifier, because it doesn’t pump harmful gases into the atmosphere, uses less water, and creates less toxic waste. All organic carbonaceous material, which includes coal, contains the same molecules—carbon, hydrogen, and oxygen—but each has a different molecular form. Gasification uses heat and pressure to break down fuel into its constituents by controlling the chemical activity leading up to combustion.

The primary product of gasification is synthetic gas, or syngas, which comprises primarily carbon monoxide and hydrogen. By using what’s called the Fischer-Tropsch process, it’s possible to convert syngas into end products: methane, ammonia, and other chemicals.

The first recorded use of a gasifier was in the late 1700s to generate fuel for residential lighting. As less expensive methods of energy production such as coal-fired power plants became more prevalent, gasification dropped in popularity.

Concerns about climate change and the need to transition to more environmentally responsible energy sources revived interest in gasification. Surprisingly, the expertise GTI’s engineers gained while downsizing rocket engines was a boon for building a compact gasifier. Whereas older systems are building-sized, GTI offers a model, marketed as the R-Gas gasifier, that’s about the size of a semi-tractor trailer. R-Gas can be constructed onsite and operates at a low cost. The system to cool R-Gas during operation, as well as its fuel injectors, were derived directly from previous aerospace projects.

By controlling the temperature and pressure and limiting oxygen, the coal is brought just short of a temperature where it would combust. At that point, molecular bonds break down and the gasifier can separate and manipulate the different molecules to create specific products. The team’s expertise in tightly managing these same types of processes in rocket engines allowed them to design a unit capable of higher operating temperatures and pressures than previous systems. These parameters can be adjusted to create numerous “recipes” for producing different liquids and gases, says Eastland.

“Either through the way the gasifier operates or through downstream processing, you can alter the ratio of the hydrogen to the carbon monoxide in order to better prepare syngas for producing the ammonia or methanol needed to make other chemicals or transportation fuels,” he explains.

While no process can transform a fossil fuel like coal into a nonpolluting form of clean energy, GTI’s rocket-inspired technology can eliminate some of the harmful effects of burning coal. Environmental benefits of gasification include reducing ozone-depleting gases, toxic slag, and contaminated wastewater that result from coal combustion.

The gasifier also produces slag, commonly called ash, but it won’t contaminate soil or groundwater. “Because we end up converting a lot more of the carbon to syngas than other gasifiers, we create a slag that is non-leachable,” explains Eastland. “That means when it ends up in contact with the earth, water does not leach out damaging chemicals or heavy metals.”

Burning syngas will still release all that carbon into the atmosphere. However, when syngas becomes the basis for creating other chemicals, gasification makes it easier to capture and sequester the carbon.

The precision control of temperatures throughout the system means R-Gas achieves the hotter temperatures required to use the cheapest, hardest-to-process coal. This high level of operating efficiency reduces the amount of electricity and other resources required to operate the gasifier. Expensive, noxious chemical additives required by other gasifiers to help control temperatures aren’t necessary. Nor does the system use a large quantity of water for cooling, thus reducing the expenses of wastewater processing, storage, and environmental cleanup.

GTI substantiated the performance expectations for R-Gas with a pilot unit operated at the company’s headquarters, processing about 18 tons of coal a day. A demonstration plant built for a nylon factory in China in late 2019 anticipated processing 800 tons of coal a day as designed.

Now a business or public utility can do more than just burn coal exclusively for power. For example, the nylon factory added R-Gas to the existing facility to produce ammonia. It’s an important chemical for creating Caprolactam, a monomer for a type of nylon. The plant looked forward to reducing its power requirements, and the sale of various end products generated a new income stream.

“Overall, we want to try to move away from fossil fuels, but developing nations are going to use coal because it’s cheap. It’s the easiest way for them to improve their standard of living,” says Eastland. “So helping them to use it in a more environmentally friendly fashion is what we’re trying to do.”

Abstract
Economic prosperity is tied to the consistent availability of cheap energy. Coal’s abundance makes it a cheap resource to generate electricity and a major source of toxic pollution. An alternative to burning coal for power—gasification—is getting a boost from NASA rocket expertise developed by companies working with Marshall Space Flight Center. Des Plaines, Illinois-based Gas Technology Institute is leveraging this expertise to help developing countries use coal in a less environmentally damaging manner.

In this image taken in China, a coal mine can be seen in the foreground with an industrial port behind it. China is the world’s largest producer and consumer of coal. Although coal’s prominence among energy sources in the country is falling, its low cost still makes it essential to powering much of the economy. Gasification can offer a way to get energy from coal that’s less harmful than burning it. 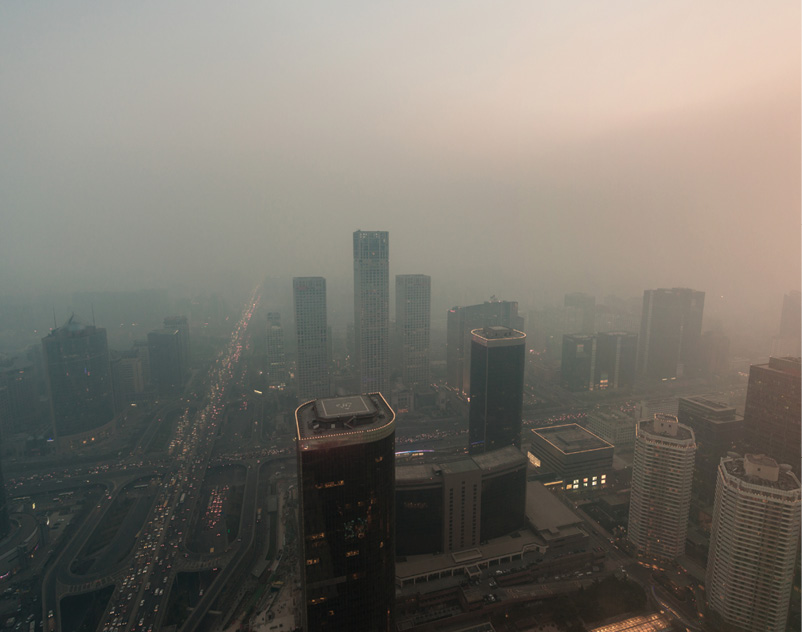 Pollution from coal-fired power plants is a significant contributor to the smog that plagues many large Chinese cities today. 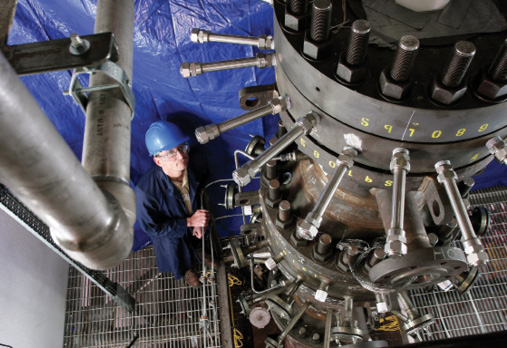 One alternative to burning coal is gasification, where coal is processed under high temperatures and pressures to extract synthetic gas and other products, which can then be used to generate electricity. GTI’s R-Gas gasifier, shown here, helps relieve some of the environmental impact from the use of coal while also creating products for industry.

The Mars Curiosity rover launched aboard this Atlas V rocket in 2012, which was powered by liquid-fuel engines. These included the upper-stage RL-10 engines, manufactured by Aerojet Rocketdyne. The company has spent decades refining rocket engine technology. In 2015, engineers from the company left to join the Gas Technology Institute (GTI), which had purchased Aerojet Rocketdyne’s energy technology portfolio, where they began work on a gasifier for energy production from coal.