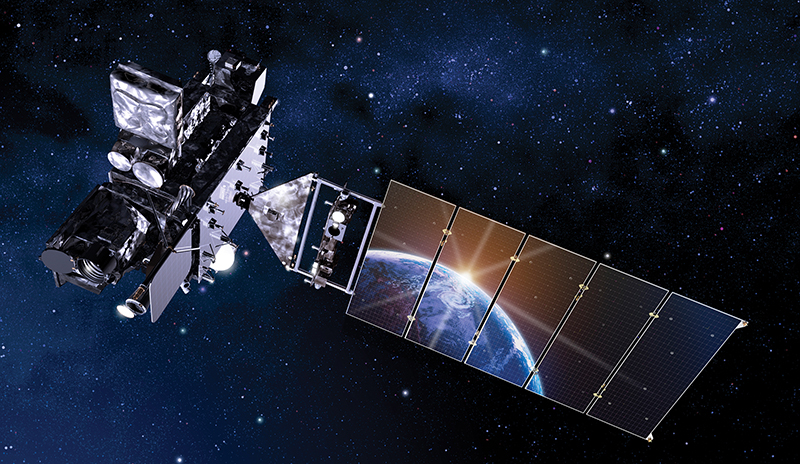 Irrigation—supplying water to growing crops—is one of the most important ways humans use water. Across the United States, for example, a full 80 percent of fresh water gets used for irrigation, and in western states, that figure can rise as high as 90 percent. Improving irrigation efficiency, to ensure only enough water is being used when and where it is needed, can increase profitability for farms while also conserving water for other uses.

An Oakland, California start-up is helping farmers do just that—and the company says it couldn’t do it without data provided by NASA imagery from the Geostationary Operational Environmental Satellites (GOES) and Landsat satellites.

But he quickly realized it wasn’t so simple to find out. One method to estimate evapotranspiration, or the total amount of water evaporating from the ground and transpiring from plants, relied on satellite imagery, but it had large error margins. Other methods, like using a lysimeter to measure water loss from plants by weight, were more accurate but prohibitively expensive and impossible to do on a large scale.

But Shapland had an idea to adapt the evapotranspiration method in a way that would reduce the error rates significantly. In short, Tule uses a surface energy balance approach. This measures the energy coming into the field, that is, the energy coming in from the Sun, and the energy going out. The outgoing energy goes into the ground, warms the air, and vaporizes water, and a negligible amount goes to other miscellaneous but important processes including photosynthesis.

By measuring the first two of these heat sinks, Shapland explains, they are able to calculate the third—the amount of energy that goes into vaporizing water, through which they can then extrapolate just how much water has been vaporized.

So far, this method is not hugely different from the error-prone models he wanted to replace. But he says the key difference is in how his company measures the second energy sink, the heat warming the air. “The reason there’s so much error,” he explained, is because “wind is a significant driver of the evapotranspiration rate.” Specifically the turbulent motion of wind plays an important role in how quickly water vapor transfers away from the plant.

Wind speed, the basic measurement that might show up in a weather report, reflects the “mean flow” of wind, or about how fast the air is moving on average across a wide area. But it doesn’t capture the turbulent transfer in the field, Shapland says. “Turbulence is individual eddies of wind carried in the mean flow. These eddies, or packets, come in contact with the surface, heat and water vapor transfers into them, and then a new eddy comes from above and pushes the old one away,” he explains. That new eddy is then poised to absorb a new round of moisture and heat before being pushed off by a fresh one yet again.

The difference between Tule’s model and the ones based entirely on satellite imagery is this measurement. “We’re measuring the turbulence within the field and measuring the rate at which the wind is taking water vapor away from the field,” he explains, using very sensitive temperature sensors. That gives them an input to the energy balance equation, resulting in a more accurate number for heat going to water vaporization.

However, even though Tule doesn’t rely exclusively on satellite imagery, it does rely heavily on it. “We use NASA technology for the energy-in part of the equation,” Shapland explains, to accurately measure how much heat is going into the field from the sun.

This actually requires two measurements. The first is the “downward component,” he explains, “the sunshine you feel.” Tule measures it using infrared imagery from the GOES system. (These satellites are built by NASA and operated by the National Oceanic and Atmospheric Administration.)

Because geostationary orbit keeps a satellite over the same geographical region, Tule is able to get short-wave radiation measurements up to every five minutes.

In addition to this downward radiation measurement, Tule calculates the radiation that reflects back up from the ground. For this, the company looks to the Landsat satellites, which supply new images every eight days. (Landsat satellites have been imaging the Earth’s surface from low-Earth orbit since the 1970s. They are built by NASA and jointly managed by the Space Agency and the U.S. Geological Survey.)

This difference in sampling frequency aligns well with the speed at which these variables change, Shapland explains. “For shortwave downward radiation, you need to sample at least once an hour, because the main thing affecting crop surface is cloud cover, and cloud cover changes constantly,” he says. In contrast, “shortwave upward, how much that surface reflects, changes very slowly, as a function of plant height and type. It changes on about a month-long scale.”

NASA satellite imagery is available to the public for free, which has enabled many products—more than a half dozen such products have been featured in Spinoff in the last five years alone. Shapland says the free imagery was crucial to its business model as well. For one thing, while commercial Earth-observing satellites are proliferating, there just aren’t geostationary ones like GOES in the commercial imaging sector yet, and the commercial satellites in low-Earth orbit don’t measure in the wavelength spectrum Tule needs.

But equally important, he says, is the cost factor of paying for images versus getting them free from NASA. “We would have to charge a lot more to our customers if these satellite data sources weren’t available,” Shapland says. “I suspect our business wouldn’t be as large and thriving if we had to charge a lot more money.”

Currently, Tule’s customers are all in California, Shapland says, with 80 percent growing wine grapes, 15 percent in almonds, and the remaining 5 percent in other specialty crops. Tule installs its wind turbulence sensors in a farmer’s field—these communicate wirelessly to send their readings to the server, which then uses that information along with other data sources, including the energy in from satellite imagery, to calculate what it calls “Actual ET,” or actual evapotranspiration.

With that, the company is able to provide information on how much water the plants are currently using and how thirsty the plants are, as well as a recommendation for how much water the farmer should irrigate with at that time. Depending on the crop and the particular point of the growing season, a farmer might want the plants to be stressed to a certain degree, so an irrigation recommendation is more complicated than simply replacing all the water lost through evapotranspiration.

Customers have seen huge results. One large almond grower was able to save around six acre-inches of water (essentially the amount of water it would take to fill an acre six inches deep, equivalent to about 25,000 gallons) in the early part of the growing season, Shapland says. The farm was able to redirect that water to other parts of the operation that needed it more, so with the exact same water consumption, it was able to significantly boost yield.

Another success story comes from a grape grower in Southern California. A typical grape season will use about two acre-feet of water, or around 100,000 gallons per acre, Shapland says. This vineyard, thanks to the data provided by Tule, was able to cut its water usage by half, a number that is even more impressive, Shapland notes, because it cultivates across 100 acres.

“They never imagined they could do that,” Shapland says, “but using our technology to see how their plants are responding to irrigation, they were able to see where and when to cut the water.”

So better information about water can mean saving water or it can mean getting a bigger yield for the same input. Either way, it’s a win for the farmer, Shapland says. “A farmer doesn’t have a whole lot of control over how much money they make from their crop. How to irrigate can really influence how much they can make: it’s the most important lever, the most substantial thing they can do to change how much money they can make.”

Abstract
Irrigation accounts for around 80 percent of fresh water use across the United States. Oakland, California’s Tule Technologies Inc. aims to improve irrigation efficiency by calculating how much water plants are using and losing daily, in part thanks to data from multiple satellites built at Goddard Space Flight Center. Today, the company sells its systems to grape, almond, and other growers across California, who use the data to cut their water use in half or get higher yield with the same amount of water.

Tule says it is able to calculate evapotranspiration more accurately than its competitors because of the sensors it places in the field to measure turbulent airflow, which plays an important role in how quickly water vapor moves away from the plant. 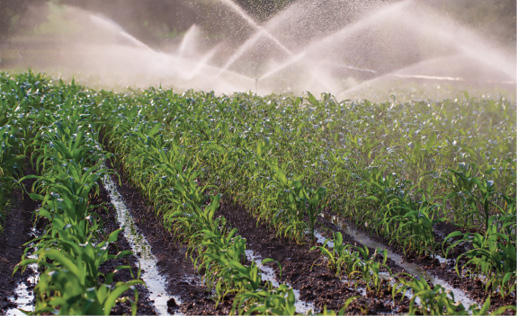 Irrigation accounts for 80 percent of fresh water use across the United States. By giving farmers better data on how their plants are using the water and how much they need, Tule helps farmers reduce their total consumption or get better yields for the same input.

The Geostationary Operational Environment Satellites (this illustration shows one of the GOES-R series satellites), built by NASA, take high-resolution images of Earth from orbit. The images are made available to the public, which allows companies like Tule Technologies Inc. to use them to improve their data products.