Pioneer Energy brings an unusual perspective to the oil and gas industry: many of its employees, including founder Robert Zubrin, have a background devising ways to extract energy not from the earth but from environments like Mars.

Zubrin began his wide-ranging career at Martin Marietta (now Lockheed Martin), as an aerospace engineer in the late 1980s. There, he gained his first fame as coauthor of the 1990 Mars Direct plan to reduce the cost of human exploration of Mars to a fraction of previous estimates, largely by making use of resources already on the Red Planet. After founding Pioneer Astronautics in 1996, he led the development of a slew of new technologies, mostly under NASA Small Business Innovation Research (SBIR) contracts. Several of the earliest of these projects were Johnson Space Center-funded technologies for turning materials abundant on Mars, such as carbon dioxide, into resources like propellants.

For example, a pair of Johnson SBIR contracts from 1996 developed a system to combine a small amount of imported hydrogen with carbon dioxide from the Martian atmosphere to produce methanol and water. With an electric charge, the water could then be split to produce oxygen and hydrogen. The methanol could fuel a rocket engine, with the oxygen helping it burn, and the hydrogen could be fed back into the system, to be recombined with carbon dioxide. Alternatively, methanol could power a fuel cell, and oxygen could be used for life support.

Among the subsequent innovations developed with Johnson SBIR funding were ways to produce hydrocarbons with lower hydrogen-to-carbon ratios, thus reducing the amount of hydrogen that needed to be imported, and an efficient, low-cost freezer to store carbon dioxide at temperatures below -200 °F.

After realizing that some of that technology could be adjusted to benefit the oil and gas industry, Zubrin spun off Pioneer Energy, based in Lakewood, Colorado, in 2008 and started work on what the company came to call its Portable Enhanced Recovery Technology (PERT) and Mobile Alkane Gas Separator (MAGS) systems (Spinoff 2015).

PERT, the first invention, essentially reversed technology for creating fuels from carbon dioxide, instead producing carbon dioxide that could be used to extract additional oil from defunct wells. It then dawned on Zubrin that many of the PERT subsystems could be used in a system to separate and process the gases that escape from oil wells. Turning these gases into fuel would give oil producers another product to sell while helping them meet pollution and greenhouse gas regulations. He started work on MAGS.

The methane and other natural gases that pour out of oil wells, especially in their early days of operation, are a major problem for oil companies and the environment. Currently, most of that gas is burned off in flares, releasing carbon dioxide and other pollutants into the atmosphere, a practice that governments are cracking down on. The World Bank estimates flaring releases about 350 million tons of carbon dioxide, a greenhouse gas and major driver of climate change, into the atmosphere each year.

A 2015 Stanford University study detailed the local health effects of flaring, which releases pollutants that cause various irritations and inflammation, as well as respiratory problems, blood abnormalities, and other symptoms. And a 2016 NASA study showed black soot from flaring in at least two major North American oil extraction sites, the Bakken Formation and the Athabasca Oil Sands, was ending up in the Arctic, where it absorbs sunlight and accelerates warming.

Flaring also represents a massive waste of resources. In 2018, the World Bank reported that 141 billion cubic meters of the gases were flared globally at oil production sites in the previous year, equivalent to about one-fourth the total annual gas consumption of the United States.

As the shale oil boom made oil relatively cheap and abundant, there was less interest in using the PERT system to revive older wells, says Joseph Palaia, vice president of business development at Pioneer Energy, noting that the system was eventually shelved. But with new wells springing up across the country, the market for processing well gases expanded, so the company continued developing the MAGS system, which has now evolved into its mobile Flarecatcher and Vaporcatcher systems, with more than two dozen units now in the field.

While Flarecatcher units, which come in three versions with varying capacity, continue capturing and processing gases that escape from wells, the Vaporcatcher does the same for the gases that build up in oil tanks at well sites.

This new product line still relies on the kinds of advanced refrigeration and gas separation techniques that would be necessary for converting materials on the surface of Mars, but it also benefits from the years the company has now spent in oil fields. “In the beginning, we didn’t have anyone who had worked in oil and gas before,” says Palaia. “Now we’ve been in the field long enough that we’ve learned not only how to operate our equipment better, to better meet customers’ needs, but we also understand better what the customers’ needs are.”

One thing the company came to understand was that simplicity, efficiency, and reliability are often more important to its customers than total refinement of gas products. While the MAGS system chilled gases to nearly -100 °F and used a molecular sieve for complete purification, a standard Flarecatcher unit can achieve satisfactory purification at around -20 °F, reducing cost, complexity, and maintenance. “At first, we were always building Cadillacs, and now we’ve got some economy models,” Palaia says.

Along with improvements to the design and the purification process, advances have cut back the time that units have to be shut down for maintenance, halting well operations, he says. “We’re at 90 to 95 percent up time, which is just great. Producers really like that.”

Capacity is also way up, with the units boasting almost twice the recovery rate of competitors. While an original MAGS system could process about 200,000 cubic feet of raw field gas per day, a new 20-foot unit can process a million cubic feet per day. A 50-foot unit can bring that up to 5 million.

For customers who want total purification, supplemental distillation units are available at four levels of capacity.

The Vaporcatcher works in much the same way but at warmer temperatures, because vapors that accumulate in oil tanks are heavier, which makes them more potent greenhouse gases if they’re vented but easier to capture and distill.

“In many cases, the value of the fuel product stream is equal to or exceeds the cost of having our systems out there,” Palaia says, meaning the cost of complying with regulations is free or better. “And then it’s kind of a no-brainer. Why wouldn’t you do it?”

The fact that the units can be trucked to a site and operated remotely adds to their convenience.

And if oil producers aren’t interested in bringing small streams of fuel to market, Pioneer Energy even has its own network of buyers. “We’ve got a market set up, we have trucks lined up, and we take care of all that,” Palaia says. “They just get a report and a check.”

In early 2019, the company was serving a dozen well sites across the Denver-Julesburg Basin, to the east of the Rockies, and in the Bakken formation, which straddles the borders of North Dakota, Minnesota, and Canada. Many sites have more than one unit in operation. By then, the company had recently expanded to another 40,000-square-foot manufacturing facility and planned that year to build enough units to process 100 million cubic square feet of gas.

And talks were underway to enter markets in the Middle East, sub-Saharan Africa, and Indonesia. “That will drive another big expansion phase,” says Palaia. He notes that the ability to fully refine and separate fuel products, whether through additional distillation units or with a version of the Flarecatcher that can chill to nearly -100 °F, is of special interest to operators in the developing world, where energy is scarce and cooking with fuels like butane is common.

Palaia attributes the company’s success in part to a mentality that never settles on a final version but constantly looks for ways to boost efficiency, reduce down time, and otherwise improve its product. And he says its employees’ background in space exploration technology “has really paid dividends, in that we haven’t looked at these problems in the way traditional oil field companies have.” In an industry that’s resistant to change, he says, a major challenge has been to convince customers that Pioneer Energy’s approach isn’t risky just because it’s different.

“One of the biggest ways NASA and the aerospace industry have contributed to the economy is the mindset of the people who work there and their impact on society,” Palaia says. “If we can land a nuclear-powered rover on Mars, we can process gas in an oil field.”

Abstract
Robert Zubrin founded Pioneer Astronautics in the 1990s, and the company devised a multitude of technologies for space exploration. Several developed under SBIR contracts with Johnson Space Center would take apart molecules abundant on Mars and reassemble them into useful resources. Realizing that some of this technology could be adapted to the oil and gas industry, Zubrin spun off Lakewood, Colorado-based Pioneer Energy. The company now markets Flarecatcher and Vaporcatcher systems that turn what used to be waste products and greenhouse gas emissions into fuel. 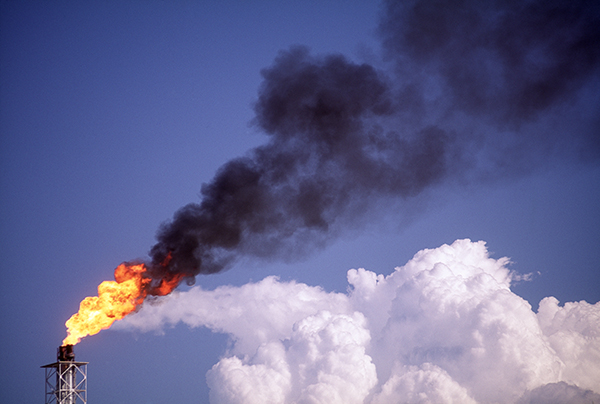 Flaring at drilling sites releases about 350 million tons of carbon dioxide per year and is associated with health problems among nearby populations. It’s also a major waste, as the gases being burned, if properly processed and separated, can be valuable fuels.

These Flarecatcher units can capture and process the natural gases that escape from oil wells, using the kinds of advanced refrigeration and gas separation techniques that Pioneer Astronautics developed to convert materials on Mars. This allows drillers to sell the gases as fuel, instead of burning them off in a practice called flaring, which releases the greenhouse gas carbon dioxide as well as various pollutants.

Long stays on Mars would require the technology to rearrange molecules from the surface and atmosphere to make resources like fuel and oxygen. First with Martin Marietta and later with his own company, Pioneer Astronautics, Robert Zubrin worked for NASA on a number of such projects for in-situ resource utilization. He later realized he could adjust some of those systems to benefit the oil and gas industry and founded Pioneer Energy.