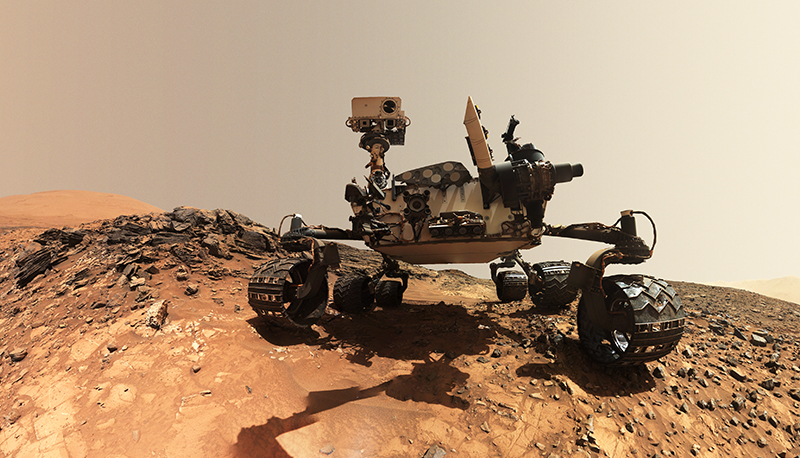 Where are the robot assistants we were promised?

For all the space that robots have occupied in the popular imagination for the last hundred years – and although the number of real-world automatons has been growing for decades – most people’s interactions with them remain limited to a hands-free vacuum or child's smart toy.

There are two main reasons for this, according to Glenn Garrett, chief technology officer of NASA spinoff company, Amorphology Inc.: cost and safety. Most automated machinery is still only affordable to large manufacturers that can make major investments and expect long-term savings. And while robots take up more and more of the factory floor, they’re generally segregated from their human colleagues due to safety concerns – largely oblivious to their surroundings, they’re strong and dangerously clumsy.

In the mid-1990s, two Northwestern University professors patented an alternative concept under a new term: cobots. Collaborative robots, designed to cooperate with humans, would be smaller, smarter, more responsive, and more aware, with tighter self-control and better manners all around. In the years since, leaps in artificial intelligence and sensors have made these “friendlier” robots a reality, but cost still prevents their widespread adoption.

“That’s where the robotics industry is going,” Garrett said, noting that a handful of cobots are already making lattes and sandwiches, for example. “But if it costs $40,000, it’s out of reach for non-industrial applications.”

The biggest cost drivers, however, aren’t always the advanced software and sensors. Instead, he said, it often comes down to some of the most rudimentary machine components: gears. “High-precision gears are at least half the cost of robotic arms.”

Now, Pasadena, California-based Amorphology hopes to drop the price of cobots with advances originally made for robots that were never intended for human interaction – NASA’s planetary rovers.

Gears on NASA’s rovers, like most gears on Earth, are made of steel, which is both strong and wear resistant. But steel gears need liquid lubrication, and oils don’t work well in frigid environments like the lunar or Martian surface. So, NASA’s Curiosity rover, for example, spends about three hours warming up lubricants every time it prepares to start rolling, using up about a quarter of the discretionary energy that could otherwise be used for science, said Doug Hofmann, principal scientist of the Materials Development and Manufacturing Technology group at NASA’s Jet Propulsion Laboratory in Southern California. “So that’s really frustrating. It would be great if those gears could just turn on and drive.”

With an eye toward solving this and other materials-related issues, in 2010, JPL hired Hofmann, then a research scientist at Caltech with a background in materials science and engineering. NASA funded a new metallurgy facility at JPL to explore alternatives for gears and develop new metal alloys.

From his days at Caltech, which manages JPL, Hofmann was familiar with an emerging class of specially engineered materials called bulk metallic glass, also known as amorphous metals. These are metal alloys that can be rapidly cooled from liquid to solid before their atoms form the crystalline lattice structure that is common to all other metals. Instead, the atoms are randomly arranged like those of glass, giving the materials properties of both glass and metal.

Depending on their constituent elements – often including zirconium, titanium, and copper – they can be very strong, and because they aren’t crystalline, they’re elastic. Most compositions also form a hard, smooth ceramic oxide surface, Hofmann explained, noting that these properties together afford gears made of some amorphous metals a long lifetime with no lubrication. “That’s, of course, really important to NASA, because you can run your gearboxes without lubricating them.”

But amorphous metals have another property that makes them attractive for gears on Earth: “These alloys are designed to have low melting temperatures, because to make a metallic glass, you have to cool the alloy faster than it can crystallize,” Hofmann said. This low melting point, together with their native strength and the fact that their volume hardly changes upon solidifying, makes bulk metallic glasses easy to use in injection molding, which can dramatically reduce the cost of making parts like gears.

Most high-strength metals have high melting points. They can’t be cast with molds because, in molten form, they would simply melt the mold. And steel needs to be rolled or forged to strengthen it, which also precludes molding. So, gears typically start as steel billets that are “machined” – cut, ground, milled, and drilled – into their final shape. Tiny gears, like those for small cobots, are especially challenging – and costly.

The most difficult, expensive gear component to machine from a steel block is one of the most common in robotic arms: the flexspline, an extremely thin-walled, flexible cup with a toothed rim. This is the centerpiece of what’s known as a strain wave gear assembly, which offers better precision, higher torque, and lower backlash than other gear sets. This eliminates positioning errors that would be compounded in a robotic limb with multiple joints.

“It’s a very strange-looking gear if you’ve never seen it, but it’s the heart and soul of a precision robot,” said Hofmann.

This is where molding with amorphous metals promises the greatest savings: it costs about half as much as machining strain wave gears from steel, Hofmann said.

Molding small, high-performance planetary and strain wave gears became the central business plan for Amorphology, which Hofmann cofounded in 2014. Through Caltech, the company licensed several patents for technology he had developed for NASA.

Meanwhile, he and colleagues continued pursuing new materials for spacecraft at both the metallurgy lab and JPL’s Additive Manufacturing Center. A number of patents and technologies led Hofmann to found a second spinoff company focused on using amorphous metals in coatings, 3D printing, and other non-gear-related applications. Both were backed by the same venture capital group, and in 2020 they merged under the Amorphology name, combining about 30 patents and patent applications for the technology from JPL.

A Market Beyond Mars

That year, the merged company finished its move into a new, 13,000-square-foot manufacturing facility where about 15 people now work, mostly making and testing prototype pieces for small gear assemblies for several customers. Amorphology’s first and largest customer is one of the world’s foremost manufacturers of strain wave gears.

At least one other customer has hired the company to coat consumer electronics parts with metallic glass, making them more durable, indicating another market with immediate potential, said Stephen Ceplenski, chief growth officer at Amorphology.

Hofmann noted that gears that can operate without lubrication are also of interest to businesses like food manufacturing, where lubricants can become contaminants.

Meanwhile, many of the company’s other patents for JPL technology – all licensed from Caltech – are probably still years away from commercialization, although they are in fields that are gaining heavy interest. Among these are new alloys and advanced metal 3D printing technologies, from thermal spray additive manufacturing to ultrasonic welding.

Amorphology is not the first company to commercialize innovations in bulk metallic glass from JPL and Caltech, but Garrett noted that creating a startup based on new materials is notoriously difficult. If lubrication-free gears or low-cost flexsplines find a long-term market, “that would be a huge step towards sustained commercial success for bulk metallic glass,” he said. “The research for the Mars rovers would be directly responsible for that.” 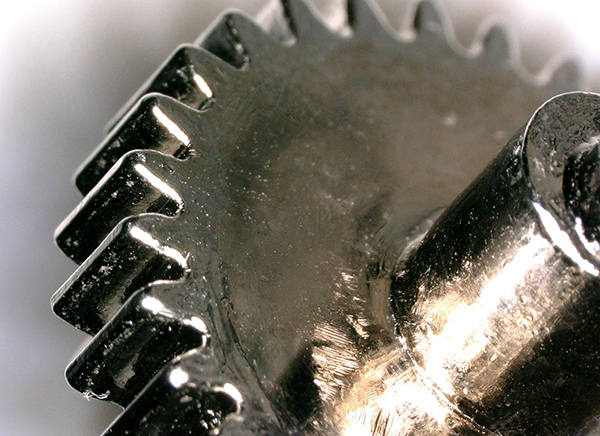 Most metallic glass alloys form a hard, smooth surface. This gives metallic glass gears a long lifetime without the need for liquid lubricants, making them especially interesting for NASA robotics that operate in cold environments, where lubricants need to be warmed before operations. Credit: NASA

A strain wave gear, also called a harmonic drive, converts the fast, low-torque rotation of an engine into slow, precise, forceful motion. As the oblong wave generator at the center spins, it deforms the flexspline around it, shown in red, which engages with the teeth of a fixed outer spline. The interaction causes the flexspline to rotate in the opposite direction of the wave generator, moving only two teeth for each turn of the motor. Strain wave gears enable most robotic arms but also drive up their cost. Credit: Jahobr, CC0 1.0

Flexsplines represent a potentially major industrial application for bulk metallic glass. The thin, flexible, cup-shaped gears are integral to the strain wave gears common in robotics. They’re typically cut, ground, and drilled from steel billets in a process that is long and costly. The flexspline shown here on the right, however, was injection molded from metallic glass in a cheaper, simpler process. Credit: NASA 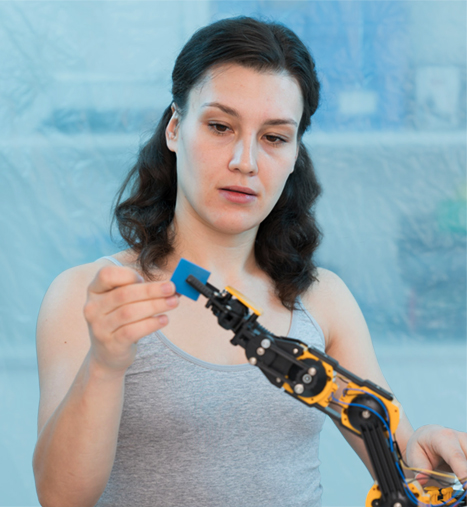 Smaller, smarter, and better controlled than their industrial counterparts, collaborative robots – or ‘cobots’ – are designed to safely interact with humans and perform a wide range of tasks. While they are becoming a fast-growing sector of the robotics industry, their cost, largely driven by expensive precision gears, is a major obstacle to widespread adoption. Amorphology Inc. plans to significantly reduce that cost by injection molding gears from NASA’s bulk metallic glass. Credit: Getty Images 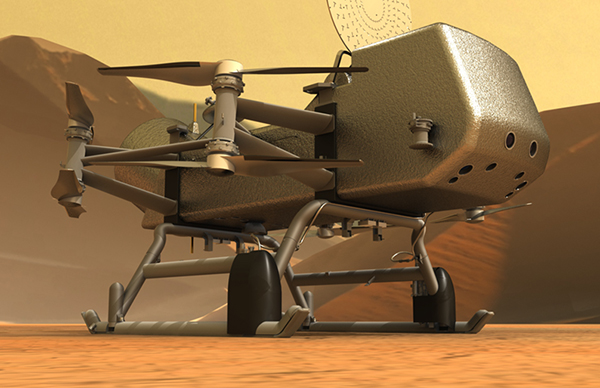 The planned Dragonfly rotorcraft-lander, which will explore Saturn’s moon Titan, is one NASA space probe that could benefit from metallic glass gears that can operate in extreme cold. Temperatures on Titan approach minus 300 degrees Fahrenheit. Credit: NASA

While NASA’s Curiosity rover represented the cutting edge of the space agency’s robotics when it arrived on Mars in 2012, it has to spend about three hours heating up lubricants for its gears each time it sets out across the planet’s surface. To help future rovers save time and energy, NASA has invested in bulk metallic glass for gears that require no lubrication. Credit: NASA 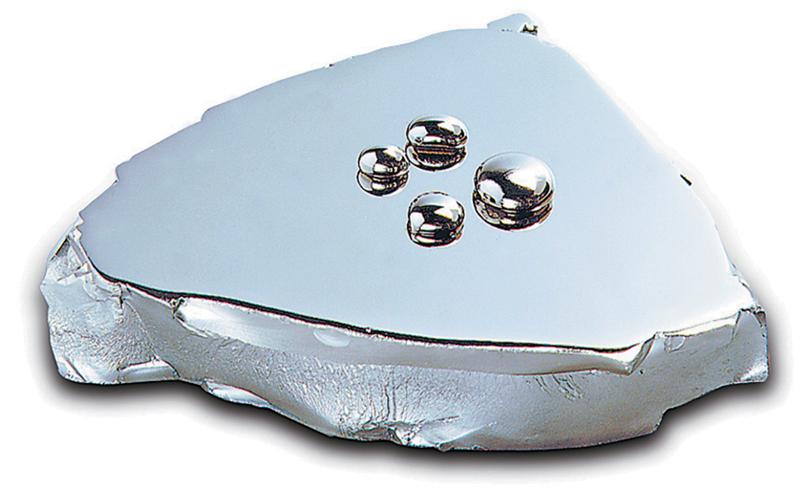 Teeing Off With an Entirely New Material 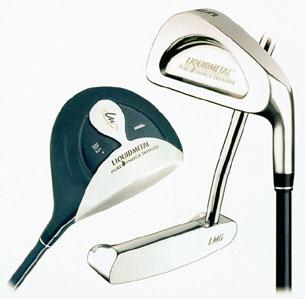