“Almost everything you need in space, you also need under the ocean,” said Thomas Valdez, manager of chemical engineering at Teledyne Energy Systems.

Both extreme environments are cold and corrosive, and more importantly, both are difficult to access when repairs, replacements, or refueling are needed. This means they require systems that are rugged, reliable, long-lasting, and efficient.

So after Teledyne Energy Systems worked with NASA to develop fuel cells for spacecraft, the company is taking the resulting cells to the offshore oil drilling industry, where they can provide backup power for well machinery on the seafloor or recharge remotely operated vehicles that tend to wells.

The work began in the late 2000s, with a team at NASA’s Johnson Space Center in Houston developing improved fuel cell technology for the space shuttle. One of the NASA engineers, Arturo Vasquez, wanted to see if a long-known principle could be applied to a fuel cell to eliminate moving parts.

In a proton-exchange membrane fuel cell, hydrogen and oxygen – the reactants that drive the cell – enter from pressurized tanks and pass through the cell stack, where they combine to form water, a reaction that creates energy. The water is then expelled, and unreacted hydrogen and oxygen – usually more than half of the original input – are recombined with the incoming reactants from the tanks to circulate again.

Usually a mechanical pump maintains the circulation, but its moving parts are often points of failure. They are also bulky and use up energy. So Vasquez came up with a way to eliminate them. He replaced the pump with an ejector nozzle at the point where reactants coming back from the stack are recombined with reactants from the tank. The nozzle combined these reactants passively using something called the Venturi effect (See Ejector Nozzle Concept diagram).

When gas or liquid flows through a choke point, it’s forced to speed up, which causes its pressure to drop. If another line is connected to the choke point, that low pressure will draw in any gas or liquid in the line. It’s a discovery that was made at the end of the 18th century by Giovanni Battista Venturi, and it’s the basis for Venturi pumps that lift parts on production lines or pump out flooding, among many other applications.

Vasquez had turned the gas intake line into a pump with no moving parts and no space requirements. “The ejector replaces the mechanical pump with a hole,” Valdez said.

The team called it an ejector-driven reactant circulation system.

Teledyne Energy Systems of Hunt Valley, Maryland, already had worked on fuel cells with NASA, and when the team members at Johnson demonstrated their invention, they used a Teledyne fuel cell stack, drawing the company’s attention, recalled Koorosh Araghi, who led the group. “When they saw how well it worked, they approached us and asked for a Space Act Agreement to transfer the technology to them.”

As the agreement was being finalized in 2012, the U.S. Navy selected Teledyne Energy Systems to provide a fuel cell for a submersible vehicle, Araghi said. Under the agreement with Johnson, Teledyne paid NASA for help designing, building, and testing a fuel cell end plate – the assembly that manages pressure – and then using that improved technology to develop fuel cell power systems to meet the Navy contract.

With the elimination of a mechanical pump, “reliability goes through the roof,” said Valdez.

In 2018, the company released its first commercial fuel cell featuring NASA’s innovation – the Subsea Supercharger. The product has two commercial target markets: oil well operators and the companies that maintain the oil fields.

So far, the technology has received the most interest from operators, who can use it as a backup to the power lines that typically run from the surface, said Valdez.

If a well has to shut down due to damaged power lines, the operator can lose upwards of $1 million per day, with shutdowns often lasting weeks, Valdez said, adding that the Supercharger can easily fill this gap. “Even if it only has to work once, it probably pays for itself 10 times over.”

The power lines are also expensive and might be miles long. Near the end of a well’s life, replacing a damaged line might not be worth the cost, but a Subsea Supercharger can extend the well’s operating life.

And for exploratory wells, the fuel cells can take the place of power lines until a productive site is discovered. “If it doesn’t produce oil, it doesn’t matter – there’s no loss,” Valdez said.

Meanwhile, companies that serve well operators often rely on underwater remotely operated vehicles to inspect and service the well trees. These use battery packs that might run for five weeks before the company has to take a boat back out to recharge them. And in cold waters like the North Sea, batteries perform poorly and might need to be recharged weekly. Fuel cells, on the other hand “can take very, very cold temperatures,” said Valdez.

For underwater vehicles, the Subsea Supercharger serves as an underwater charging station, one that can provide months’ worth of power.

The cells come in different configurations, with output ranging from 8 to 16 kilowatts and storage ranging from 100 kilowatt hours to tens of megawatt-hours.

The company is working on deploying its first subsea unit with an oil and gas company in 2020 and has found a second client interested in deploying the unit in 2021. Other subsea clients and a spacecraft manufacturer are in negotiations, Valdez said.

Meanwhile, the military remains a customer for charging underwater vehicles, and the Federal Aviation Administration has purchased a fuel cell based on the ejector-driven reactant technology for hybrid-electric aircraft research. 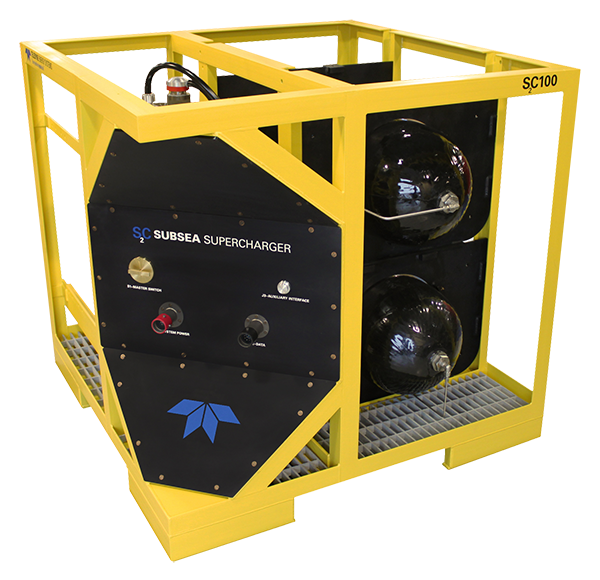 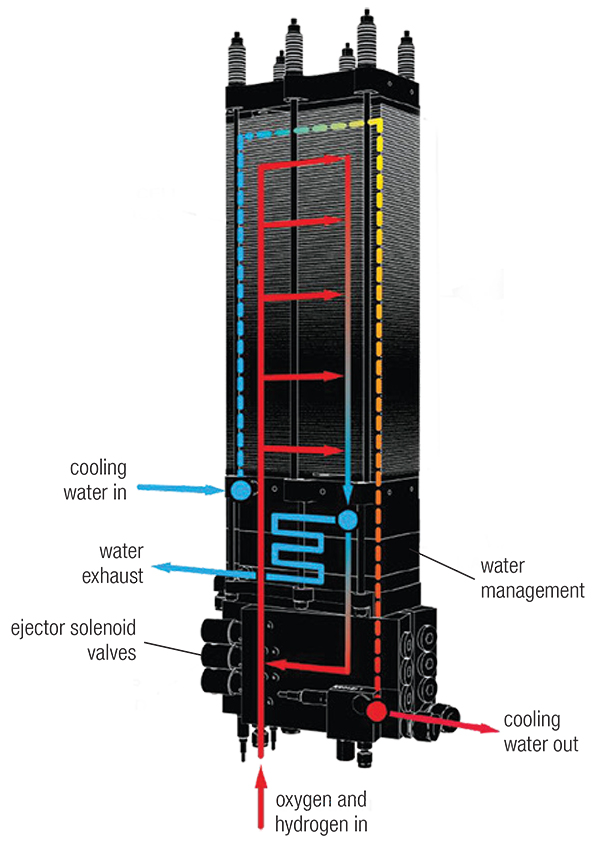 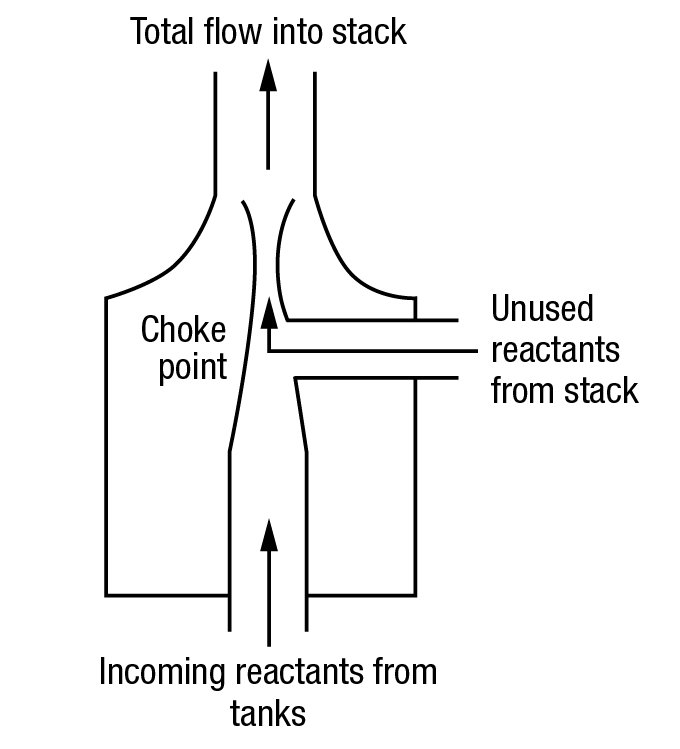 The fuel cell’s ejector nozzle effectively becomes a Venturi pump. As gases coming from the tanks pass through a choke point, they’re forced to speed up, which causes their pressure to drop. That’s where the line bringing unused reactants back from the stack is connected, and the low pressure draws them in, pulling them back into the stack so they’re not wasted. An engineer at Johnson Space Center came up with the idea of replacing a mechanical pump with the nozzle, increasing reliability and efficiency.

The Subsea Supercharger fuel cell can be hooked to any number of oxygen and hydrogen tanks to run for as long as necessary. Credit: Teledyne Energy Systems 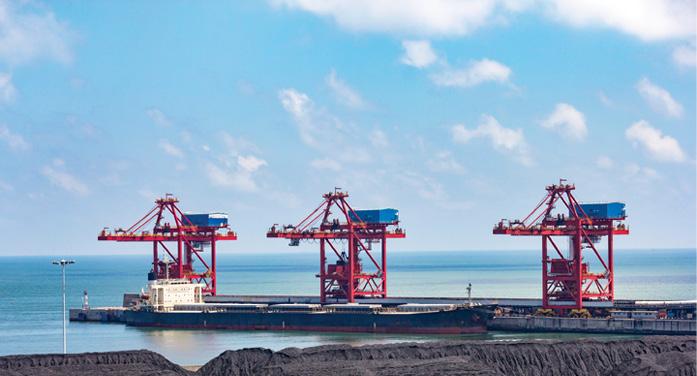