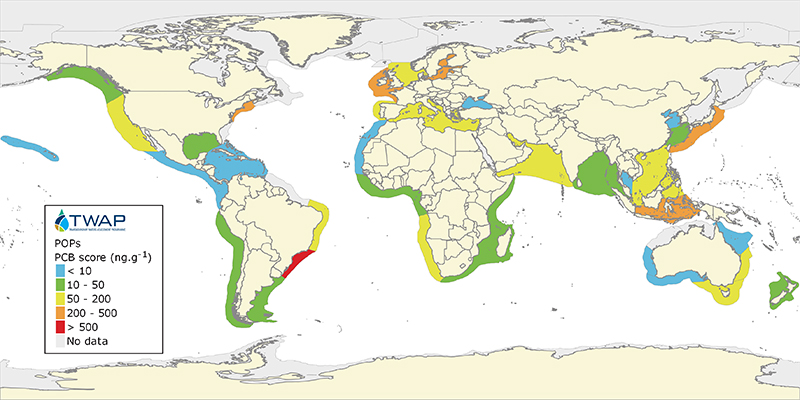 Jackie Quinn had an idea. What if the system NASA developed for removing contaminants from building paint could also be used to clean up the environment? In her quest to find out, the engineer demonstrated NASA resourcefulness, starting out with a couple of plastic drinking straws she grabbed from a cafeteria at the agency’s Kennedy Space Center in Florida.

The contaminants she was working against were polychlorinated biphenyls, more commonly referred to as PCBs. When the molecules were first developed, they were added to paint because they are non-flammable and can withstand temperature extremes. That meant paint wouldn’t crack, peel or catch fire, all important qualities for buildings located near rocket launches.

But PCBs can also have negative effects on humans and animals, in particular by changing how their hormones function. This can result in physical and mental developmental issues.

“Nobody set out with the intent of hurting anyone when they developed PCBs,” said Quinn, an environmental engineer at Kennedy. “We just didn't know. But when you do know, you’ve got to go fix it. That's what we're trying to do.”

Banished but not Vanished

PCBs are rarely heard about, partly because they’ve been banned since 1976. But the cleanup has been difficult. According to a 2016 report from the United Nations’ PCB Elimination Network, PCBs are still the most globally widespread manufactured contaminant.

These molecules were used extensively in a wide array of applications, and as a result, they can be found all over the world leaching out of landfills and into the environment, making their way into soil and groundwater sources. A 2009 study by the Environmental Protection Agency (EPA) found that, in fish tissues sampled from 500 lakes around the United States, every single one had detectable levels of PCBs.

“We really have to think about the food, air and water we’re consuming on a daily basis. Is it clean?” said Ian Doromal, executive vice president and cofounder of ecoSPEARS. He is on a mission to use NASA technology to remove human-generated contaminants from the environment. “People are starting to realize that this is not just something that happened in the past,” said Doromal.

Because PCBs are hydrophobic — resistant to water — they gravitate to soil and sediment. Experiencing minimal degradation over time, they remain there, posing a risk unless removed. That’s why they’re classified as a “persistent organic pollutant,” or a “forever chemical.” Until now, no cleanup process has been able to completely remove PCBs from an ecosystem.

To remove PCBs from paint and other elements in its buildings after hurricane damage in the early 2000s, Kennedy devised a system that uses a benign reagent, or a reaction-causing substance, to attract and trap the contaminants. Quinn wanted to see if the technique could be adapted to get the contaminant out of the water near the buildings, too. As a first attempt, she heat-sealed the ends of her drinking straws, filled them with the reagent, capped them and placed them in a liquid containing PCBs.

It worked in a matter of hours.

“We saw a decrease in the amount of PCBs outside the straw and found PCBs inside the straw,” she said. Subsequent experiments in several natural waterways proved the technology effective.

Based on Quinn’s experiment, Kennedy developed a spike-shaped polymer tube called the Sorbent Polymer Extraction and Remediation System (SPEARS). When Sergie “Serg” Albino, CEO and cofounder of ecoSPEARS, learned about the technology, he saw incredible potential — so much so, he named his company after the NASA technology.

“The SPEARS work like a sponge,” Albino said. “Individual spikes are inserted into a mat structure, and you press it into the sediments. You leave it there for a certain amount of time, and the SPEARS absorb the PCBs or other chlorinated contamination from water and sediments. It gets absorbed into the reagent that's inside the SPEARS. When they’re removed, the molecules are taken out of the environment permanently.”

Among the most contaminated and difficult areas to remediate are seaports, according to Albino. A common technique, dredging to remove sediment, disrupts port business and damages the ecosystem. In addition to limiting shipping activity, the dredging scoops up the sediment layer containing plant and animal species.

Using the Port of San Diego, an ecoSPEARS client, as an example, Albino underscores the cost of environmental damage.

“There's sensitive eelgrass in California waters. If you were to dredge all that up just to get rid of the PCB contamination, you're paying four times more because you have to reconstruct the eelgrass,” he said.

On top of that, whatever life forms are left behind or move in later will be exposed to the PCBs left by the debris plumes created during the process. Microbes and small aquatic species absorb the PCBs, so the fish that eat them also become contaminated. As each new predator consumes a contaminated food source, the PCBs accumulate and biomagnify every step of the way.

Sequestration in the form of capping is supposed to hold toxic material in place, preventing it from entering the food chain. But it’s unreliable. An example of this came to public attention when the caps in San Jacinto waste pits in Texas were moved or damaged by Hurricane Harvey and subsequent flooding. The PCBs and other contaminants flowed onto residential property and exposed a wide area to the toxins.

“The PCBs, the contamination is the bad guy in this,” said Albino. “But the lack of innovation is an even worse enemy. The folks in this trillion-dollar industry have decided there's really no good technology for it. So, they continue to dig, transport and dispose.”

Albino and his team based in Altamonte Springs, Florida negotiated an exclusive license in 2017 for the NASA-developed SPEARS, branding their product ecoSPEARS, and are making it an integral part of an environmentally sound PCB removal process. In addition to improving the original design, the company has developed its own proprietary reagent for containing the toxins.

The company is now piloting a new method for destroying PCBs on site. This technique breaks down the chemicals at the molecular level, transforming them into non-toxic compounds. The extraction and elimination processes work in water and soil. This alternative can eliminate the costs of removing and shipping contaminated material to an approved landfill site for storage or burning it, which pumps pollutants into the atmosphere.

Clients using this new technology for their remediation projects include the Department of Health in Hawaii, a pulp and paper company, and a Fortune 500 multinational oil and gas company. EcoSPEARS is partnering with the engineering and construction consulting firm Black & Veatch on cleanup of an EPA-designated Superfund site in Florida, one of a number of projects in the company’s growing portfolio of practical applications that prove the science behind ecoSPEARS.

Entities responsible for environmental cleanups are paying attention. Among these is the Port of San Diego and its Blue Economy Incubator program, which supports entrepreneurship, fostering sustainable aquaculture. In June 2019 the port kicked off a $200,000 cleanup pilot project with ecoSPEARS. The United Nations and its PCB Elimination Network are also partnering with the company to help achieve the U.N. Sustainable Development Goals to eliminate PCBs by 2028. The company was also accepted into the Clean Water Accelerator program of Imagine H2O, a nonprofit that supports startups to develop and deploy their technologies and solutions to solve global water issues.

Doromal estimates companies can save 20 to 30% over traditional removal and capping methods, with the number increasing as the company gains economies of scale.

Albino adds that the company is actively working with numerous organizations to build community awareness about the contamination. The cofounders credit NASA for the unique opportunity the technology presents. As a former NASA contractor, Albino is also using the expertise he gained working in NASA’s innovative environment.

Quinn agrees and is pleased to see this unique technology finding its way into environmental remediation efforts.

“I have these really cool pictures of footprints on the Moon hanging in my office,” she said. “I would like NASA to have a footprint-legacy behind us for positively impacting Earth.”

Abstract
NASA created technology that absorbs toxins from sediment and groundwater. EcoSPEARS licensed it and now sells a system that is both cheaper and more effective than traditional cleanups. 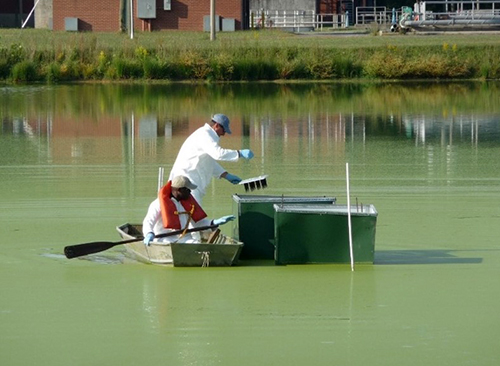 NASA field-tested the Sorbent Polymer Extraction and Remediation System (SPEARS) in a contaminated pond in Altavista, Virginia after lab experiments successfully removed PCBs from a liquid environment. Several of these tests proved that a commercial product could be developed to remove PCBs from waterways, reducing the toxins entering the food chain. Credit: NASA

PCBs, first mass produced in 1929, experience little degradation over time. Though PCBs are now banned, a report from the United Nations’ Transboundary Waters Assessment Programme report notes there are still “hot spots” of contamination worldwide, shown here in orange and red. Many fisheries are located in these areas, where higher levels of contamination accumulate in the food chain. Credit: UN GEF Transboundary Waters Assessment Programme