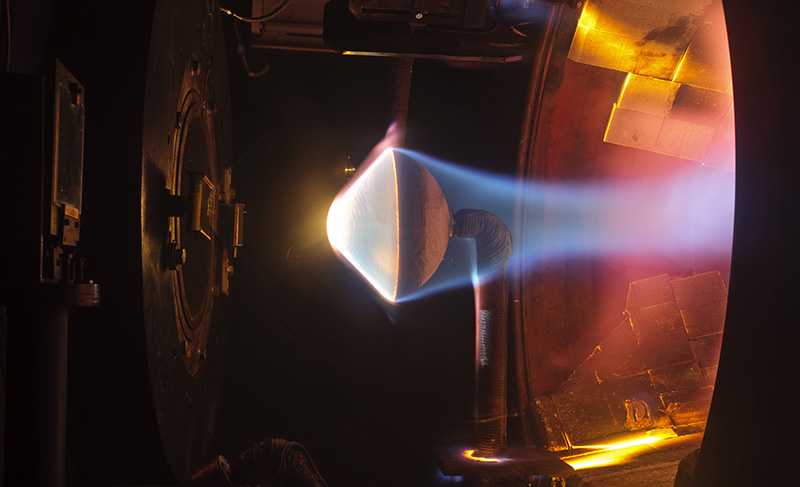 The space station doesn’t have curb-side trash pickup. Nor does it have a local landfill or recycling plant. What it does have is access to a naturally efficient incinerator – Earth’s atmosphere

Astronauts pack several thousand pounds of the stuff into a rather unusual trash can – an expendable cargo resupply spacecraft. When it is time to “take out” the trash, the filled cargo spacecraft undocks from the International Space Station and falls into Earth’s atmosphere, where the spacecraft and its contents are vaporized

That’s because a solid object entering Earth’s atmosphere at approximately 17,500 mph will experience significant friction created by the drag of compressing atmospheric gases. As the spacecraft plunges deeper into the atmosphere, where the air is denser, a tremendous amount of energy is released as heat. This forces the gas molecules to dissociate. A spacecraft without a heat shield, like these expendable cargo vehicles, experiences the same heating, vaporizing the solid material

Replicating this high-temperature trash processing on Earth is precisely what InEnTec Inc. is doing, with some help from NASA arc jet research and technology

NASA learned how to recreate the extreme temperatures and speeds of atmospheric entry decades ago as a way to test heat shields. InEnTec, based in Richland, Washington, looked to the power source modifications NASA used to generate high-temperature plasma and incorporated them into its technology design to create its Plasma Enhanced Melter (PEM). The PEM transforms waste material into synthetic gas and other products

Incinerators that rely on combustion produce toxic pollutants, but plasma-enabled gasification doesn’t. It heats the waste, called feedstock, to extremely high temperatures. At 1,800 to 27,000 degrees Fahrenheit, carbonaceous material breaks down into basic molecules – carbon, hydrogen, and oxygen. By controlling the combination of heat and pressure, it’s possible to regulate the chemical activity that leads up to gasification.

The molecules are separated and then converted into products that can be used to create anything from jet fuel to clothing. Any inorganic material that’s left over, called slag, is added to super-heated glass. The resulting non-toxic substance is safe for a number of industrial uses, including building materials. The entire system generates no air pollution or toxic waste.

The key to this efficiency is the heat. “We boost the temperature with the plasma,” explained Jeff Surma, CEO of InEnTec. It’s the same kind of plasma that NASA created to test the first heat shields used on spacecraft

Lightning in a Tube

Scientists and engineers knew what atmospheric entry would be like because the laws of physics make it possible to predict the conditions a spacecraft will encounter. The combination of gases, heat, and pressure will create plasma. Dissociated gas or plasma conducts current, generating tremendous heat. So the materials chosen for a heat shield to protect astronauts had to be tested to prove they would perform as expected.

But replicating the conditions of reentry on Earth wasn’t possible with 1950s technology when NASA began testing heat shields first for hypersonic aircraft and then for the Mercury, Gemini, and Apollo spacecraft.

“An oxy-acetylene torch was used early on for testing heat shield materials for aerospace entry vehicles,” said Joe Hartman, former chief for the Thermophysics Facilities Branch at NASA’s Ames Research Center in Silicon Valley, California. However, the torches could only reach a maximum of around 6,290 degrees Fahrenheit, far short of the 15,000 to 20,000 degrees needed to recreate the conditions of atmospheric entry.

Engineers looked for existing technology that they could rapidly improve instead of starting from scratch. The arc heaters used in the chemical industry were ideal. Now retired from NASA, Hartman recalled his boss describing the resulting plasma arc heater as “a lightning bolt in a long tube.”

The plasma arc heaters NASA uses now consist of a tube about three inches in diameter and up to 16 feet long that contains hundreds of three-eights-inch-thick copper discs, each cooled with water. Two electrodes at either end of the tube provide the points for each end of the electrical arc to attach. At the end of the tube is a supersonic nozzle designed to generate supersonic speeds from Mach 3 to Mach 5, creating the environment in the test chamber where the samples of heat shield material are placed to simulate entry conditions.

The design breakthrough was the use of the individual copper discs to control the arc inside the tube, dramatically increasing the temperature. Cooling the heater while in use prevents the various components from melting. In 1965, NASA patented what it called the segment-constricted arc heater, which has since become an aerospace standard, Hartman said.

InEnTec used the NASA research while developing its power supply, in combination with other resources, to design its own patented plasma arc gasification technology, said Surma. This informed his design for integrating the plasma technology with the standard gasification process.

“We read many of the journal articles and patents that involved NASA work,” he said. “Since NASA was the pioneer of the high-temperature plasma torch, we tried to learn as much as we could by reading that information, some of which influenced our approach."

Trash In, Fuel Out

Started in 1995, InEnTec has installed 13 PEM systems around the world.

“In Japan, our technology has been certified for the destruction of PCBs – polychlorinated biphenyls,” said Surma, a high hurdle, because regulations require “six-nines destruction, or 99.9999% destroyed, and we achieved 10 nines.” These persistent toxic chemicals don’t degrade much over time, so techniques for eliminating them are essential for toxic waste cleanup.

Aemetis Inc., an InEnTec client in California, will use the PEM system to create a replacement for gasoline. Their system processes biomass to generate cellulosic ethanol. Besides the benefits of repurposing local waste, this system also eliminates the financial and environmental costs of transporting and disposing of it. And using cellulosic ethanol reduces greenhouse gas emissions by approximately 80% compared to gasoline.

InEnTec’s gasification facility at the Columbia Ridge landfill in Oregon, which has operated for over two years, has been upgraded and will convert medical and other waste into hydrogen for vehicles powered by hydrogen fuel cells. “This project will take all types of industrial waste and convert it into hydrogen,” explained Surma. “This is the first of many projects for distributed hydrogen production to help implement the broader use of fuel cells.”

A chemical company, InEnTec’s newest client, is working on recycling plastic waste. The plastic feedstock is converted into synthetic gas and intermediate materials that could be used to create new plastics.

Hartman is happy to see all of the ways in which plasma arc technology is used as a result of the work NASA did decades ago. Both the private sector and space exploration continue to benefit from the unique requirements of space travel.

“It’s a very old technology that has been developed to the point where it is still creating leading-edge research,” he said. “It’s also a good way to get rid of dangerous waste. Running it through an arc heater is a really good way to reduce it to the basic elements and render it totally harmless.”

Abstract
To test head-shield material for spacecraft, NASA developed high-heat plasma-arc technology. The research and patents – now expired – were published, and one company used them to create plasma enhanced melters that turn garbage into useful materials. 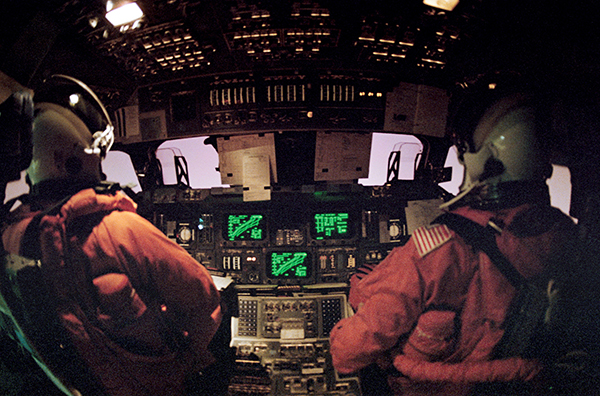 This cabin view of the space shuttle during STS-42 reentry shows the color of atmospheric plasma. Due to the compression and friction of the air, the molecules generate a very hot plasma which glows in the red-orange spectrum. Credit: NASA 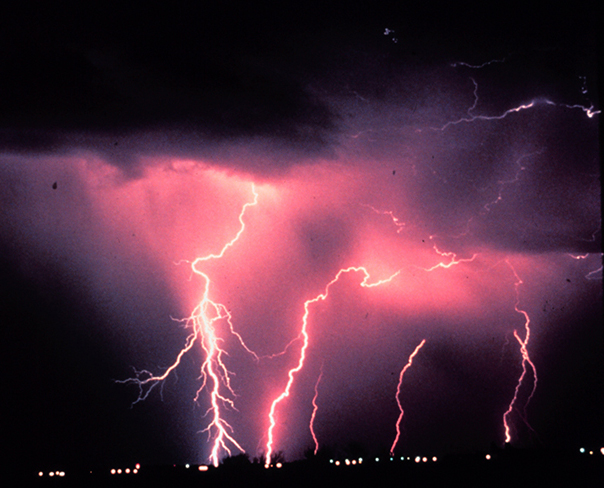 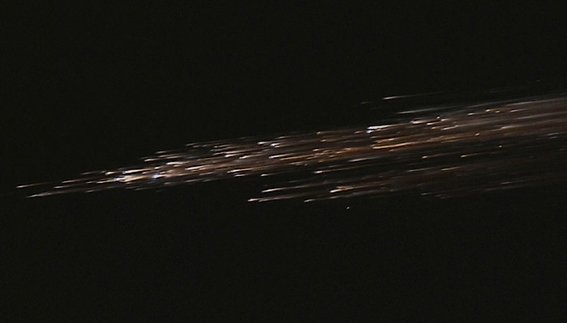 When most resupply craft undock from the space station, they fall into Earth’s atmosphere. This vaporizes most of the craft and its contents, as seen in this picture of the European Space Agency's Jules Verne Automated Transfer Vehicle burning up on reentry in 2010. Credit: NASA 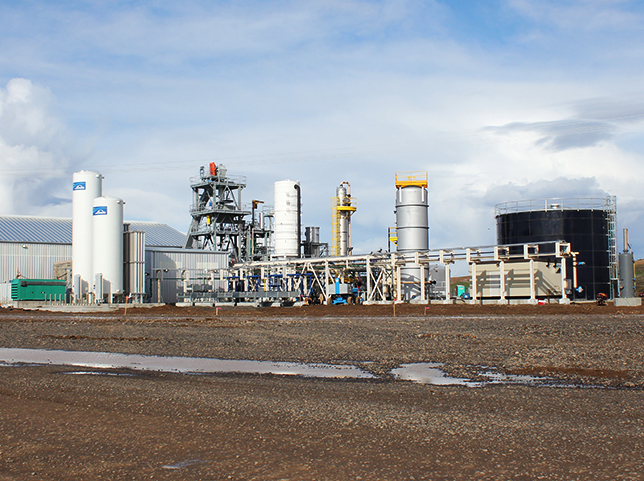 The Columbia Ridge facility of InEnTec has demonstrated the ability to convert medical waste, household trash, and other types of garbage into renewable hydrogen. Using NASA research on plasma-arc technology, the company created a patented plasma-assisted gasification system. Credit: InEnTec

The Arc Jet Complex at Ames Research Center tests thermal protection material with plasma like that generated during atmospheric reentry to make sure it will work effectively. Credit: NASA