A new pair of smart glasses uses a technique invented at NASA to measure users' brainwaves and tell them how well they’re paying attention. Others have used the NASA formula to help people train themselves to focus, as has the company’s founder, but Narbis’ new smart glasses are getting much quicker results.

The technique is based on neurofeedback, detecting brainwaves and showing users a readout of their own brain activity. With practice, they can then learn to control it.

NASA didn’t invent neurofeedback. But in the 1990s, a scientist working on pilot training at NASA’s Langley Research Center in Hampton, Virginia, came up with a way to translate brainwave output to characterize attention levels. More and more of a pilot’s job was being done by automated programs, and researchers were becoming concerned that pilots, being less engaged, would have trouble maintaining focus.

To help pilots train their attention, Langley researcher Alan Pope invented what he called an engagement index. The strength of higher-frequency beta waves that result from greater concentration is divided by the combined power of alpha and theta waves – lower-frequency outputs associated with relaxation. Pope’s system then spit out a number, one through six, to indicate the level of engagement.

His team tested the technique and found that subjects who were shown their engagement level while performing a task were able to learn to control their concentration and outperformed control groups while reporting a lower perceived workload.

Clinical psychologist Domenic Greco worked with biofeedback therapy – which can be based on anything from brainwaves to heart rate – since the early 1980s. Around 2000, he and his son Devon exclusively licensed aspects of NASA’s system, including the engagement index, and founded CyberLearning Technologies, using video games to help users improve control over their concentration. The SMART BrainGames system, released in 2003, made it harder to control the play as the user’s attention wandered.

But the Grecos wanted to move beyond video games and bring the technology to bear on real-life activities. In the months before Domenic’s death in 2013, the father-son team came up with a solution: apply the same neurofeedback technology to smart glasses that users could wear while performing any task at all. The glasses would darken as the user became distracted, providing a real-time incentive to stay focused.

After his father’s death, Devon shuttered Cyberlearning and almost immediately started Narbis, of Ambler, Pennsylvania, to work on the smart glasses.

While several companies have tried different twists on neurofeedback, Pope said this one is different because “there’s an incentive involved – you’re motivated to make the lenses clear, so it uses reinforcement.”

Greco clarified that the glasses never go dark enough to interrupt activity but just enough to alert the user of distraction. “Consistent with the principles of operant conditioning, the darkening acts as a penalty,” he said.

Another bonus is that the glasses let the user apply the system to real life. “We’re integrating this into immersive activity where the user gets to choose the activity,” Greco said. “And because they’re choosing, they’re more engaged and having a more successful outcome.”

For example, he said, students can use the glasses while studying or doing schoolwork, helping them stay focused on the task and training them to control their attention.

The first prototypes went out to clinics in 2014, and iterations of the glasses have been in testing ever since. The Harbin Clinic in Rome, Georgia, reported that clinicians were seeing results from the Narbis prototype in about half the time it normally took with other clinical neurofeedback, Greco said. In all, he said, four out of five patients who have trained with the glasses reported significant improvement in five or fewer 30-minute trainings, and people who take medication for attention difficulties are coming off those drugs after about 20 sessions, as opposed to the 30 sessions it usually takes with other neurofeedback techniques.

The final product became available for preorder in late 2019 and started shipping in August 2020. It includes the glasses, three sensors that fit on the head, a Bluetooth amplifier, and a tablet that runs the software.

Patents on the NASA technology have expired so no license is required, but Greco said the Narbis system uses NASA’s engagement index and the accompanying algorithms, as well as the “dynamic thresholding” of the original technology – that is, the way the level of difficulty varies with the user’s performance.

Similar technology has drawn interest from professional athletes and even musicians for seeming to enhance performance, he said, noting that members of the Italian soccer team that won the World Cup in 2006 credited their win to neurofeedback and other biofeedback training. Greco said Narbis has received interest from a couple of Major League Baseball teams. Clinics that offer neurofeedback therapy will also be customers.

But Greco said the core customer base will be home users who struggle with attention disorders or just want to improve their concentration. He noted that more than 10 million children in the United States have been diagnosed with forms of attention deficit disorder, with a fifth of their parents looking for solutions other than medication.

Pope, who has served as an advisor to both CyberLearning and Narbis, said one possible reason neurofeedback therapy hasn’t become more widespread is that it has required a practice regimen that means regularly setting aside time. But Narbis smart glasses eliminate the need to spend time training. “We brought the training into real life,” said Greco. “You’re getting feedback while doing things you’ve got to do anyway.”

Concerned that increasing automation in the cockpit would cause pilots to lose focus, researchers at Langley Research Center came up with a way to measure focus and train them to maintain attention. Credit: NASA 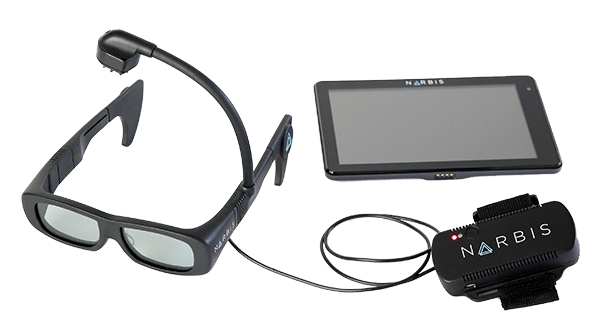 The Narbis smart glasses set includes the glasses, equipped with three brainwave sensors; a Bluetooth-enabled amplifier on an armband; and a tablet with training programs. Credit: Narbis

Narbis glasses train the user to focus by darkening when attention wanders and clearing up when focus resumes. They can be used while performing virtually any task. Credit: Narbis