Orbital Sciences Corporation (OSC), Fairfax, Virginia is a world leader in the design and manufacture of small space systems intended to reduce the cost of space operations and thereby broaden the market for space products and services.

Among the company's extensive line of products is a family of inflatable structures for the atmospheric monitoring community. One such inflatable, known as the "Jimsphere," is of particular interest because, although developed more than 30 years ago, it remains the standard at all U.S. missile/launch vehicle ranges for obtaining accurate upper level wind data.

Large missiles and launch vehicles are very sensitive to windshear, especially as they approach the area of maximum dynamic pressure, typically between 30,000 and 50,000 feet. Prior to every flight today, launch teams analyze a computer-generated flight profile that involves detailed specifications of the wind field through which the vehicle must fly. In the early 1960s, however, no method existed for making high resolution measurements of the wind profile. At that time NASA was already developing the Saturn launch vehicles for the Apollo lunar landing program and it was essential that NASA also develop a meteorological sensor of superior aerodynamic stability to determine the vertical gradients of the wind before Saturn launches commenced.

The standard smooth-surface weather balloon could not do the job. The reason: the smooth balloon was subject to zigzagging or spiraling as it ascended, due to large air vortices that shed off the surface at various positions; this caused sporadic horizontal motions of the rising balloon that made accurate radar-tracking measurement of the balloon impossible.

After several NASA-sponsored studies failed to provide a suitable method, a NASA engineer came up with an answer. Dr. James R. Scoggins, today director of meteorological studies at Texas A&M University, then at Marshall Space Flight Center, took a simple approach to a complex problem: rather than invent a new system, change the characteristics of the existing system, the smooth surface balloon. He bought some conical dixie cups and attached them to a balloon to "rough up" the smooth surface. The cones, or "roughness element," were intended to prevent the formation of vortices and thus damp the sporadic motions; additionally they increased drag. The combination of reduced lift and increased drag stabilized the balloon so that, when it entered a changing wind field, it would quickly assume the speed of the wind without zigzagging. It worked; named the Jimsphere in honor of its inventor, the system was assigned to a company for refinement and production and OSC subsequently acquired the patent rights.

The Jimsphere now being produced is a balloon two meters in diameter, made of lightweight, flexible, radar-reflective materials. Ground radar, navaids or theodolites track position and collect wind data from the balloon at altitudes up to about 10 miles. Jimsphere data was used in the design of the Saturn vehicles, the Space Shuttle and other launch systems. The balloon has supplied pre-launch wind data for all NASA/Air Force ground-based rocket launches from Cape Kennedy, Kennedy Space Center and Vandenberg Air Force Base.

Abstract
NASA needed a way to make high-resolution measurements of the wind profile before launching Saturn vehicles. The standard smooth-surface weather balloons zigzagged or spiraled as they ascended due to air vortices that shed off the surface at various positions, which made accurate radar-tracking measurement impossible. A Marshall Space Flight Center engineer modified the surface of the balloons with conical dixie cups, which stabilized them. Now produced by Orbital Sciences Corporation, the Jimsphere is the standard device at all U.S. missile/launch vehicle ranges. 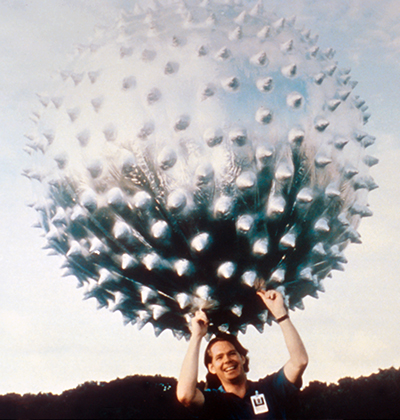 The Jimsphere wind measurement balloon is made of lightweight radar-reflective materials.