Every Breath You Take

Sustaining astronaut crews on lengthy tours-of-duty demands the utmost in air revitalization hardware. In fact, their very lives depend on quality air. Earth-orbiting space stations, piloted spacecraft en route to Mars, or habitats deployed on the Moon require a controlled ecological life support system (CELSS). This type of apparatus relies on the growth of healthy plants and the removal of any contaminants expelled in the process.

KSE, Inc., located in Amherst, Massachusetts, is building efficient air revitalization systems for space missions. The work is underway through Small Business Innovation Research (SBIR) contracts with Johnson Space Center. KSE is preparing a photocatalytic ethylene scrubber for the constant removal of ethylene from space-rated plant growth systems. Maintenance of ethylene levels in the parts-per-billion range in plant growth facilities is essential for a CELSS, which relies on the growth of healthy plants.

The KSE technology is identified as Adsorption-Integrated-Reaction Process, or AIR Process for short. For NASA's interests, the company adapted the process to develop the Vehicular Air Purification and Odor Reduction System (VAPOR).

This technological innovation represents a novel integration of separation and purification unit operations. Unique photocatalyst formulations are exploited. A proprietary catalyst traps and concentrates contaminants onto the surface of a highly effective adsorbent. This process then destroys the contaminants at ambient temperatures in the presence of ultraviolet light. That promotes dissolution of the contaminant into environmentally safe compounds, such as water and carbon dioxide. The photocatalyst's surface is restored to capture more impurities.

KSE has prepared and tested over 100 photocatalysts in the program, in addition to hundreds of previous photo-catalysts. Plans to fly plant chamber test units in 1998 are under discussion.

Extensive applications in commercial pollution control are also anticipated for this novel, cost-effective technology. Those applications include air quality and remediation of soils and groundwater.

KSE also has designed process reactors that churn out no residual wastes or by-products that need further treatment or disposal as hazardous waste. The process is self-contained and mobile, requiring a small amount of space. Moreover, this equipment needs less energy than thermal incineration or catalytic oxidation. In addition, it has lower total system costs than traditional technologies. Having flip-of-the-switch, on/off controls, the adsorption-integrated-reaction process has shown up to 99-plus percent destruction efficiency in field tests.

A commercial customer has purchased from KSE a full-scale air purification system. The reactor can destroy airborne trichloroethylene, dichloroethylene, and vinyl chloride vapors. Those chemicals are resident at an Environmental Protection Agency Superfund site. KSE's photocatalytic approach was seen as the most cost-effective technology by an independent consulting firm. The firm's reactor system was judged far superior to activated carbon adsorption, catalytic oxidation, and thermal oxidation.

Another purchase order is being discussed--a unit eyed for installation at a municipal Superfund site in Vermont. If placed at that site, the KSE technology will retire an existing carbon adsorber unit.

The technology received the 1997 SBIR of the Year Award for Environment, Energy & Resource Management by NASA Tech Briefs and the Technology Utilization Foundation. 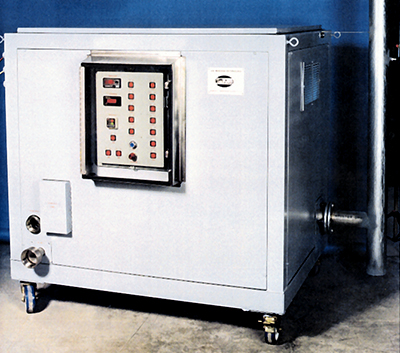 KSE air purification hardware was developed under contract to NASA for removal of contaminants in closed life support systems.