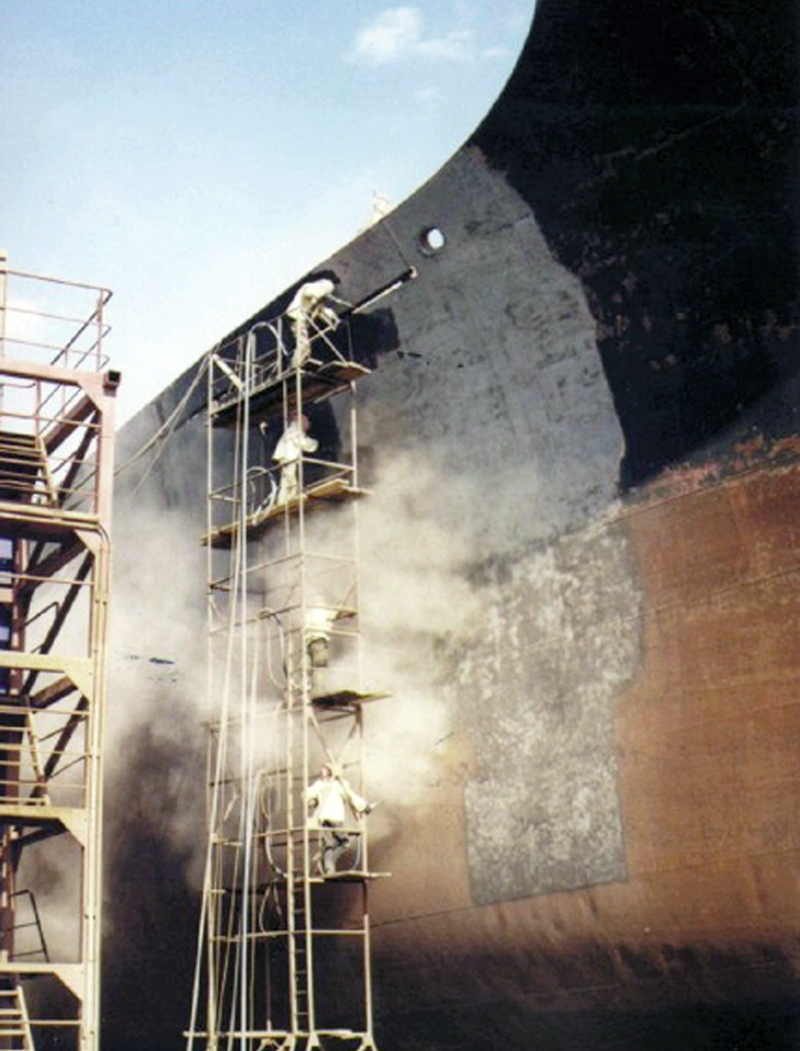 Mother Nature's new best friend is a robot. NASA's efforts in robotics are paying off in the commercial sector, as UltraStrip Systems, Inc., of Stuart, Florida, took advantage of NASA's funding, technology, and lessons learned in developing robotics for space missions, such as the unmanned exploration of Mars, to develop the patented M-2000 Robotic Paint Stripping System. Built out of a partnership between NASA's Jet Propulsion Laboratory (JPL), the National Robotics Engineering Consortium (NREC) at Carnegie Mellon University, and UltraStrip, the M-2000 is a robotic paint removal system that strips paint from ships without polluting the environment with toxic airborne dust.

Before a ship can be painted, marine growth, corrosion, and layers of old paint must be removed. The semi-autonomous paint removal system attaches itself magnetically to the hull of a ship, with a vacuum hose running from it. A controller helps navigate the robot along the surface of the ship with 360 degrees of movement. The M-2000's high-pressure water jet generates 40,000 pounds per square inch of pressure to blast away the paint right down to the ship's steel substrate.

The resulting by-product is nothing more than water and dried paint chips, both of which are captured by the powerful vacuum system so no toxic residues escape to pollute the environment. The waste products are passed through a filtering system in a closed loop, extracting the paint from the water into a container, and recycling the water.

Using robotics to remove paint is a major advancement from the traditional method of paint stripping. Traditional grit blasting techniques release environmental contaminants via the toxic dust produced, placing workers at risk for injury. It is also more expensive, which is an important consideration given the frequency ships need to be repainted. By using recycled water, water usage is reduced and there is no costly grit removal to landfills.

Other benefits of UltraStrip's M-2000 extend beyond preserving the environment. The robotic system is able to strip paint faster and remove more contaminants from the paint surface, all at a cost savings over grit blasting. The M-2000 removes salt and surface contaminants at a rate 200 percent greater than grit blasting. The result is improved paint coat adhesion, extending the coating life and reducing the need for constant repainting. The shorter time spent in dry dock increases profits for companies in the shipping industry. The M-2000 requires as few as four operators to remove the six to twelve acres of paint surface found on a typical supertanker, which also reduces the cost of labor and contributes to the reduced risk of injury.

While this technology is going to market, improvements are underway at JPL that will enhance the performance and reduce the time to remove the paint by at least 50 percent, using ultrasound to blast the paint off while the water removes it. A brush sensor is also being developed to sense any paint residue, which will optimize the speed of the operation while improving the quality of the paint removal.

UltraStrip is currently working with shipyards from around the world to transition them to the M-2000 system. The company is also already looking into a second-generation of the technology to include computer vision, allowing the robot to adjust its course. Sensors are also being developed to detect surface quality, paint thickness, and amounts of paint remaining on the hull.

Abstract
UltraStrip Systems, Inc.'s M-200 removes paint from the hulls of ships faster than traditional grit-blasting methods. And, it does so without producing toxic airborne particles common to traditional methods. The M-2000 magnetically attaches itself to the hull of the ship. Its water jets generate 40,000 pounds of pressure per square inch, blasting away paint down to the ships steel substrate. The only by product is water and dried paint chips and these are captured by a vacuum system so no toxic residue can escape. It was built out of a partnership between the Jet Propulsion Laboratory and the National Robotics Engineering Consortium. 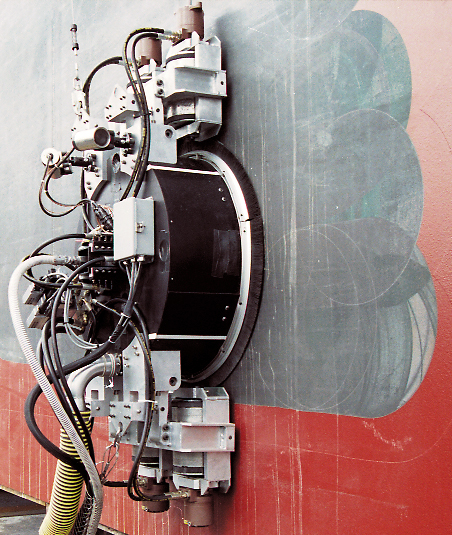 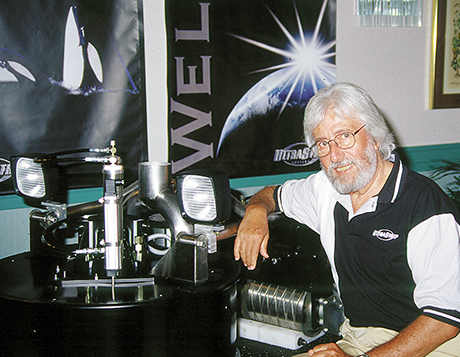 Jean-Michel Cousteau, president of a non-profit organization dedicated to preserving the global water system, seen here with the M-2000 has partnered with UltraStrip Systems to keep the world’s water ecosystems clean. 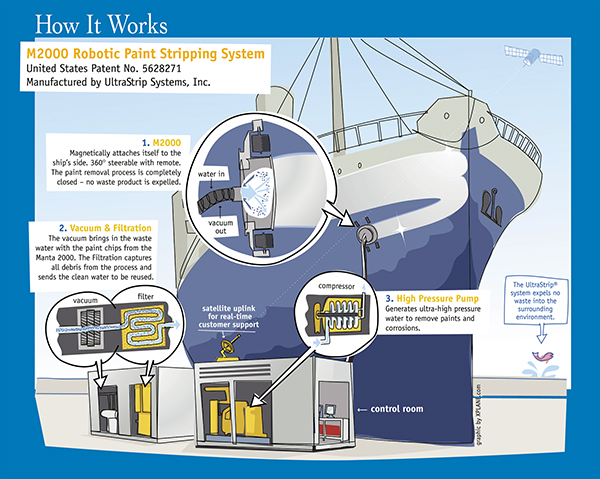 Traditional grit blasting produces toxic dust which poses a health risk to workers as well as the environment.