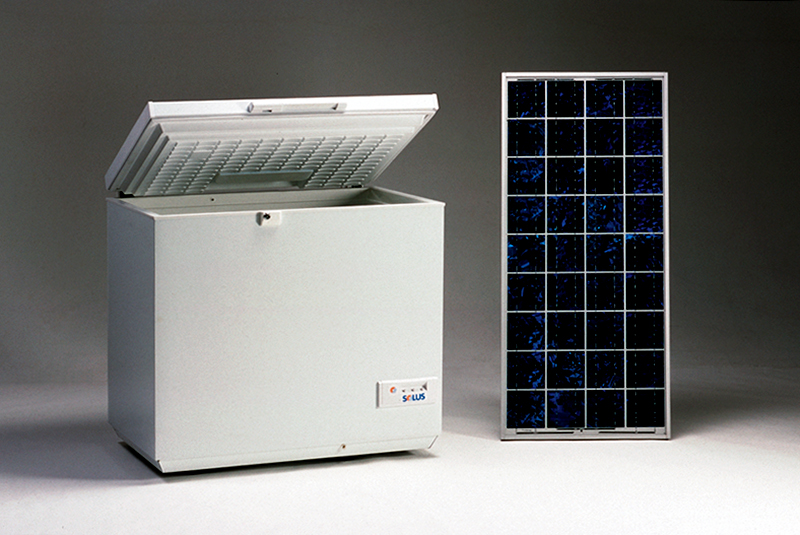 Pioneered by NASA to provide power for satellites and spacecraft, photovoltaics is a viable source of energy used to light over 1 million rural homes around the world. Photovoltaic (PV) cells directly convert sunlight into electricity, without having to utilize limited fossil fuel resources. PV energy contributes to improved air quality and aids in the reduction of greenhouse gases that play a role in global warming. For example, when it displaces coal-fired generation, a common source of electricity among power plants, harmful sulfur dioxide and nitrous oxide emissions are eliminated.

Most homes running on PV energy, however, employ simplistic lighting systems that are incapable of providing refrigeration. This can be especially troublesome for areas in which no conventional power source exists, including remote automated weather stations, forest stations, and Third World villages.

In the midst of developing battery-free, solar-powered refrigeration and air conditioning systems for habitats in space, David Bergeron, the team leader for NASA's Advanced Refrigerator Technology Team at Johnson Space Center, acknowledged the need for a comparable solar refrigerator that could operate in conjunction with the simple lighting systems already in place on Earth. Bergeron, a 20-year veteran in the aerospace industry, founded the company Solus Refrigeration, Inc., in 1999 to take the patented advanced refrigeration technology he codeveloped with his teammate, Johnson engineer Michael Ewert, to commercial markets. Now known as SunDanze Refrigeration, Inc., Bergeron's company is producing battery-free, PV refrigeration systems under license to NASA, and selling them globally.

Designed to function in arid to semi-arid regions with at least 5 sun-hours per day, the PV direct-drive, or "PV direct," SunDanzer™ solar refrigerator is a chest-type cabinet with a 105-liter (3.7 cubic feet) internal volume, a lockable top-opening door, a corrosion-resistant coated steel exterior, and a patented low-frost system. It uses thermal storage for cooling efficiency, with a direct connection between the vapor compression cooling system and the PV module. This is accomplished by integrating a phase-change material into a well-insulated refrigerator cabinet and developing a microprocessor-based control system that permits the direct connection of a PV module to a variable-speed compressor. The integration allows for peak power-point tracking and the elimination of batteries (thus, the environmental threat of improper battery disposal is eliminated).

For the phase-change material, SunDanzer uses a nontoxic, low-cost, water-based solution with exceptional freezing properties. The variable speed feature allows the compressor to operate longer during the day and better utilize the variable solar resource. A fixed speed compressor, conversely, can only use about 50 percent of the solar resource, and would not be able to begin cooling as early in the morning or as late in the afternoon, when the sun is low and not shining directly on SunDanzer's solar panel. It would also waste power during solar noon, when the available power is more than the compressor needs to run.

The solar refrigerator's thermal storage material provides 7 days of reserve cold storage, even in tropical climates, or during extensive periods of cloudy weather when sunlight is not available for energy production. Additionally, the unit is manufactured to run on as little as 90 to 120 watts of rated PV power. The combination of a super quiet compressor and fan ensure nearly silent operation, while light indicators on the front of the refrigerator inform users of the status of the thermal reserve. For frequently cloudy regions or areas with less than 5 sun-hours per day, SunDanze Refrigeration offers highly efficient battery-powered refrigerators, as well as freezers. These units run on 12 or 24 volts, direct current, and require a smaller PV or renewable energy system.

Prior to commercialization of the battery-free solar refrigerator in October 2001, NASA installed the original prototype unit in a covered, outdoor location at Johnson in Houston, Texas. For almost 3 years, it was used to store lunches and soft drinks, and was exposed to various experiments, including various defrosting tests. After undergoing several refinements to right the problems encountered, the NASA unit achieved satisfactory results, despite the hot, humid, coastal environment of Houston.

NASA also issued grants to New Mexico State University and Texas Southern University that allowed students and faculty to perform further evaluations of the solar refrigeration technology in a realistic field setting. Testing at New Mexico State included the installation of a battery-free model that consistently cooled up to 6 gallons of drinking water per day, for a period of 15 days, in the dry, desert-like city of Las Cruces. The Texas Southern University tests verified that the solar refrigerator could maintain refrigeration for over a week of continuous overcast weather.

Besides residential homes and stores, applications for the solar refrigerator include cabins, vacation houses, eco-friendly resorts, farms, medical clinics, and street vendor carts. Johnson's Ewert foresees an even wider market with mass production, noting that approximately 2 billion of Earth's inhabitants do not have electricity. 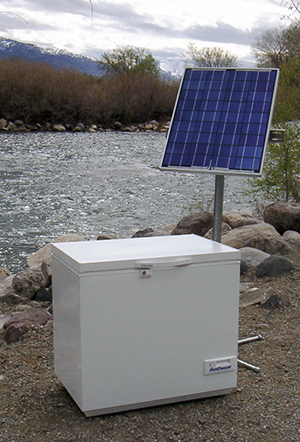 SunDanzer™ solar-powered refrigerators can keep contents cold for 7 days, even during extensive periods of cloudy weather when sunlight is not available for energy production.

Designed to function in arid to semi-arid regions with at least 5 sun-hours per day, the photovoltaic, direct-drive SunDanzer™ solar refrigerator is a chest-type cabinet with a 105-liter internal volume, a lockable top-opening door, a corrosion-resistant coated steel exterior, and a patented low-frost system.