Six Earthbound Benefits Thanks to the International Space Station

The space station is a technological wonder in its own right – sustaining human life in space for over 20 years. But its construction, upgrades, and maintenance have spurred a wealth of innovation that is also beneficial on the planet it serves.

NASA has long worked to mitigate bone loss caused by long stays in space. NASA worked with a biotechnology company to test a series of new osteoporosis treatments on mice in microgravity, in the hopes of helping astronauts and the earthbound alike. The outcome supported studies on Earth that resulted in a new bone treatment drug and other drugs still in development.

NASA, looking for ways to help astronauts retain muscle mass in microgravity, teamed up with an entrepreneur with the idea for a weightless weight trainer using elastic resistance. After testing on the space station, the Bowflex Revolution home gym was born. A phenomenon of the early 2000s, the exercise equipment is now a popular staple in fitness centers across the country.

Few challenges are more pressing for NASA than the need for clean water. Water is heavy, and every pound launched into space costs thousands of dollars. So, on the space station, sweat, urine, and even breath moisture are recycled as drinking water. Continued efforts to improve the technology led to advanced membranes now purifying drinking water on Earth and under study for applications from wastewater treatment to dialysis.

The world’s first industrial-strength robotic glove only exists because NASA and General Motors (GM) realized that space exploration and automobile manufacturing had a lot of common goals, including reducing hand fatigue for astronauts and factory workers alike. NASA and GM built Robonaut 2 to go to the space station, and the resulting patents led to a glove that adds force to the user’s grip, reducing the risk of injury.

Research conducted by NASA proved what astronauts learn first-hand – fine motor skills are impaired during the first week in space. To learn more about how leaving and returning to gravity affects fine motor skills, an app to test astronaut performance was created. Now this app is available to anyone and could help recovery efforts of physical therapy patients.

The need to grow food in space pushed NASA to develop indoor agriculture techniques. Thanks to the agency’s research, private companies are building on NASA’s vertical farm structure, plant-growth “recipes,” and environmental-control data to create indoor farms, resulting in higher crop yields and better-quality produce while conserving water and energy and eliminating the need for pesticides. 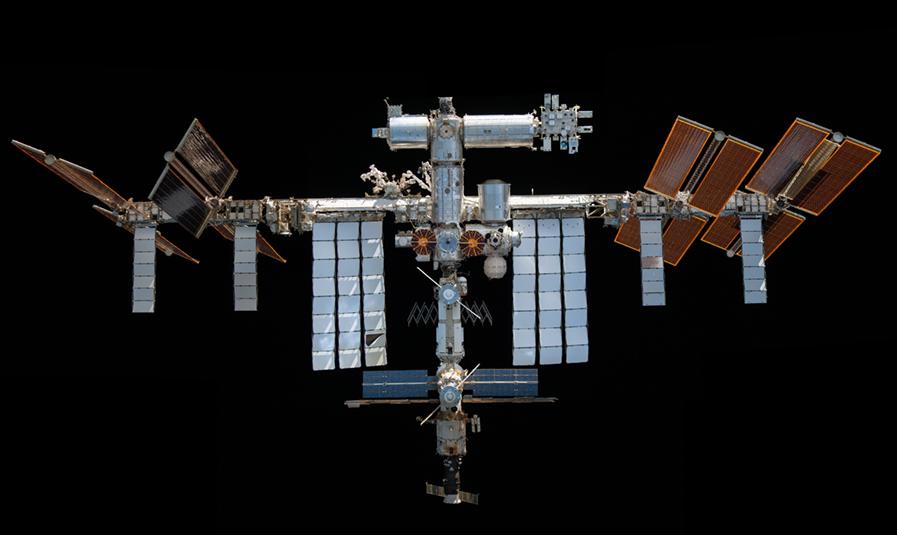 This mosaic depicts the International Space Station pictured from the SpaceX Crew Dragon Endeavour during a fly around of the orbiting lab that took place following its undocking from the Harmony module’s space-facing port on Nov. 8, 2021. Credit: NASA 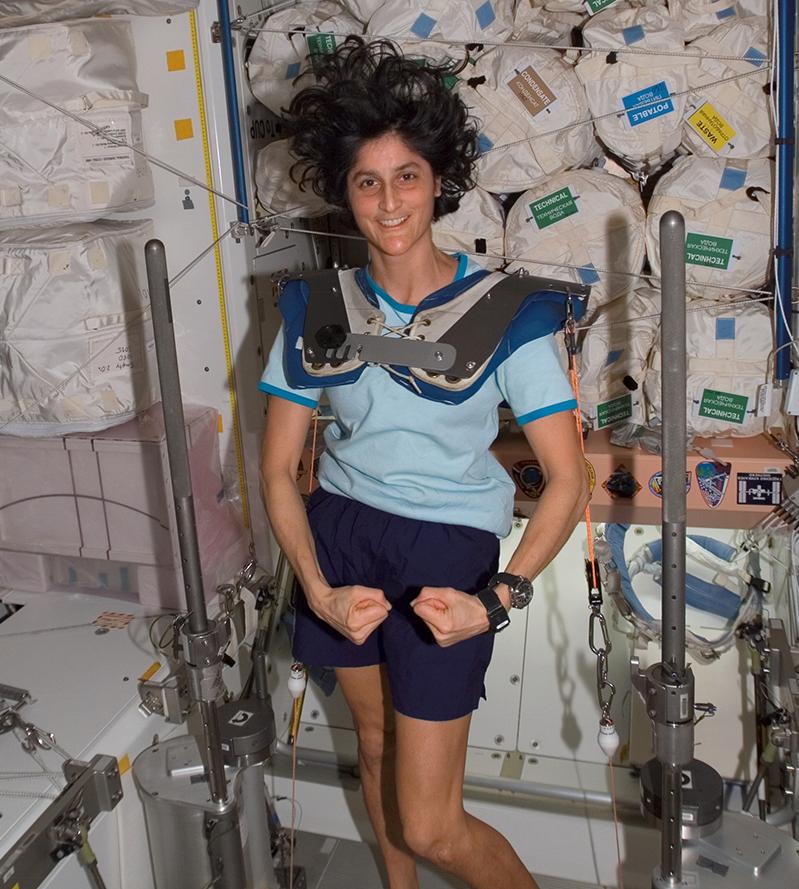 Astronaut Sunita Williams poses while using the Interim Resistive Exercise Device on the ISS. Parts of this device would go on to power the Bowflex Revolution and other commercial exercise equipment. Credit: NASA 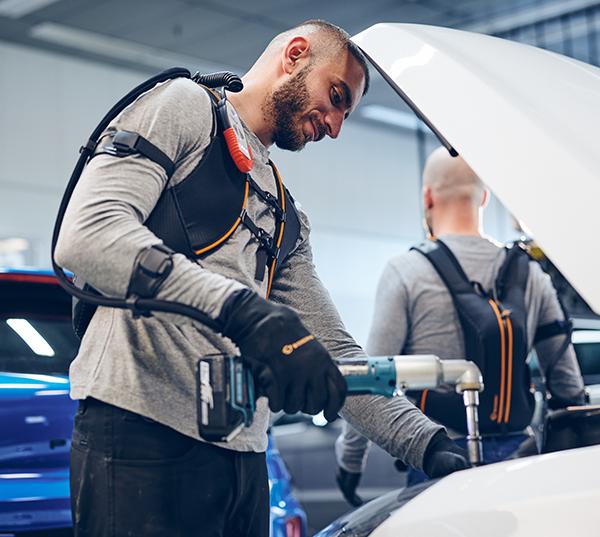 Swedish company Bioservo Technologies’ Ironhand, based on a set of patents from NASA and General Motors' (GM) Robo-Glove, is the world’s first industrial-strength robotic glove for factory workers and others who perform repetitive manual tasks. Credit: Bioservo Technologies/Niklas Lagström 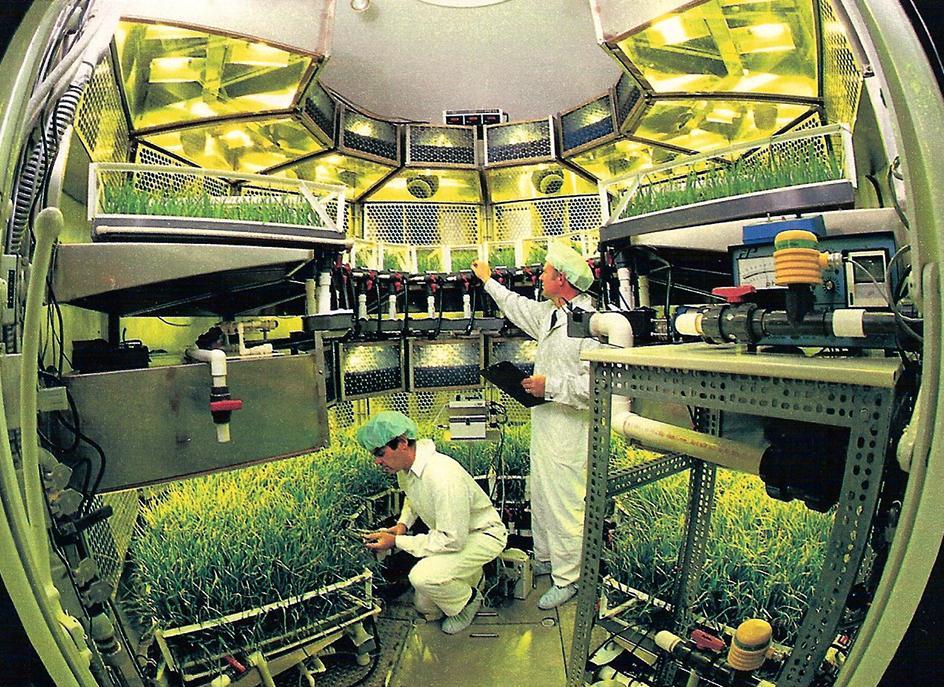 The interior of the Biomass Production Chamber at Kennedy Space Center replicated the closed growing environment astronauts will use in space or on other planets to grow fresh crops. As the first controlled environment vertical farm in the United States, the chamber helped NASA provide critical data for the indoor farming industry. Credit: NASA

Only 400 kilometers (250 miles) above our heads, ISS streaks across the sky at 36,000 kilometers (17,500 miles) per hour, orbiting the Earth every 90 minutes. The station carries an impressive array of research facilities supporting hundreds of experiments at any given time across every major science discipline. It can host up to eight visiting vehicles and accommodate 11 crew – all while providing an amazing view featuring 16 sunrises and sunsets per day. Credit: NASA