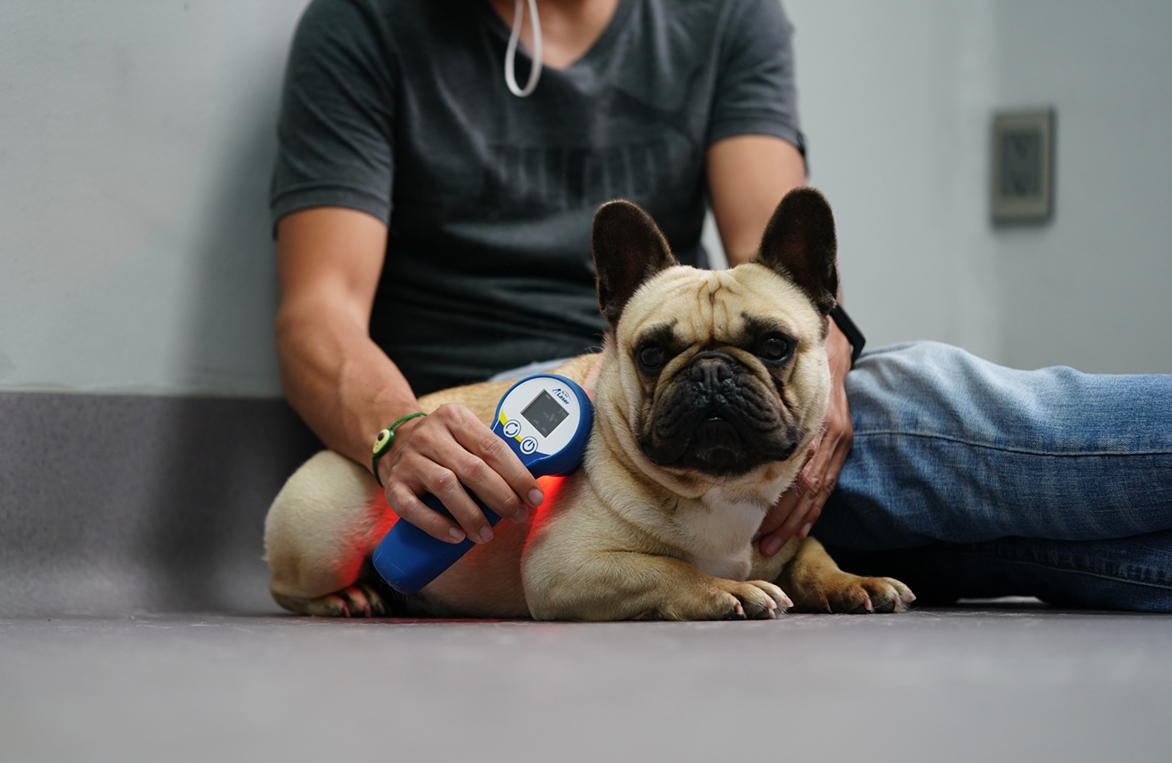 Although decades of studies indicate it can – including extensive research funded by NASA – the mounting evidence hasn’t always drawn the attention that might be expected for such a striking discovery.

This may be because the science behind it hasn’t been well understood. For example, although a Danish physician received a Nobel Prize in 1903 for discovering that exposure to concentrated red light accelerated the healing of sores, he remained reluctant to put it into practice without understanding why it worked.

A larger barrier to acceptance, though, has probably been that it simply sounds unbelievable.

In a 1989 paper about the health benefits of low-powered laser light, biophysicist Tiina Karu noted that the treatment appeared “highly incredible and even mysterious.” What’s more, she wrote, its effectiveness against many different ailments only added to doubts by creating the appearance of a proverbial snake-oil panacea.

Karu hypothesized that red light treated many afflictions because it improved overall cell function by stimulating the mitochondria that drive metabolism in animal cells. This would accelerate cell production and relieve oxidative stress, a factor that causes inflammation and symptoms of aging and ultimately contributes to diabetes, cancer, neurodegenerative diseases, and other illnesses.

Today it’s thought that red and infrared wavelengths are absorbed by cytochrome C oxidase, a key enzyme in cellular metabolism, and probably by other light-sensitive chemicals, triggering a cascade of effects within the cell.

Karu and others began to suspect that “uniform” laser light probably wasn’t necessary for producing beneficial effects, but it was NASA that finally answered that question after the space agency stumbled on it accidentally.

LEDs for Plants, Then People

In the late 1980s, engineer Ron Ignatius worked at a company that partnered with the Wisconsin Center for Space Automation and Robotics (WCSAR), which was funded by NASA’s Marshall Space Flight Center in Huntsville, Alabama. As light-emitting diode (LED) technology entered the commercial market, Ignatius worked with WCSAR to study this new lighting for growing plants in space. In 1989, Ignatius founded Quantum Devices Inc., and Small Business Innovation Research (SBIR) funding from NASA paid the company to complete an LED plant-growth unit that grew potatoes on the space shuttle in 1995.

But the research had a side effect. The LEDs were red and blue because these are the most efficient light wavelengths for driving photosynthesis, and NASA scientists who spent time working with their hands under the lighting found that abrasions on their hands seemed to heal faster than normal.

This was how NASA stumbled into the world of medical light therapy. The agency saw a possible solution to a longstanding problem of space travel: without gravity, astronauts’ muscles and bones atrophy, and any wounds heal slowly, all of which endangers missions.

Ignatius also became interested in possible medical uses for LEDs. When he learned that Harry Whelan, a neurologist at the Medical College of Wisconsin, was investigating medical applications of light, he reached out.

Between 1995 and 2003, a series of eight NASA SBIR contracts, mostly from Marshall, funded experimentation on medical uses of LEDs, carried out between Quantum Devices, the Medical College of Wisconsin, and a few other entities.

Near-infrared laser light had recently been shown to speed healing of wounds – particularly those that were starved for oxygen – by boosting the production of growth-factor proteins, collagen, and blood vessels. But lasers had drawbacks, said Helen Stinson, who oversaw the work as a senior engineer in Marshall’s Spacecraft and Vehicle Systems Department. “With lasers, you’ve got to be careful not to damage surrounding tissue, and they also use a lot of energy and they’re expensive,” said Stinson.

Besides addressing these issues, LED arrays also can be designed to emit multiple wavelengths, and they can cover a larger area than a laser.

Through experimentation, the researchers showed that high-intensity red and near-infrared LEDs significantly accelerated the healing of oxygen-deprived wounds in rats and also sped the growth and proliferation of skin, bone, and muscle cell cultures from mice and rats. The team supplied LED devices to U.S. Navy crews for treatment of training injuries. These produced more than a 40 percent greater improvement in musculoskeletal injuries and a 50 percent faster healing time for lacerations, compared to control groups.

Around that time, Whelan and colleagues showed that irradiation with Quantum Devices’ red LED arrays prevented methanol from causing blindness in rats, leading them to suggest light therapy as a treatment for retinal ailments from glaucoma to age-related macular degeneration.

With additional military funding, Quantum Devices advanced this technology as the handheld WARP 10 – for Warfighter Accelerated Recovery by Photobiomodulation – to treat pain, inflammation, and minor injuries in military personnel. The U.S. Food and Drug Administration (FDA) cleared its use for the temporary relief of minor muscle and joint pain, arthritis, and muscle spasms. The company commercialized the device and followed it in 2007 with the larger and more advanced WARP 75.

Quantum Devices’ partnership with NASA and the Medical College of Wisconsin, along with the University of Alabama at Birmingham, culminated with a clinical trial using the WARP 75 to successfully treat acute sores that form in patients’ mucus membranes following powerful doses of radiation and chemotherapy that prepare them for bone marrow transplants.

Two years after Ignatius’ death in 2011, Quantum Devices left the field of medical LEDs, and NASA didn’t end up using the technology in space. By then, however, the NASA-funded research had given rise to a growing multitude of companies commercializing the technique.

Not all those devices, however, are equal, said Robin Schumacher, who handled marketing for Quantum Devices during the WARP years. “The WARP is still leaps and bounds better technology than 99% of what’s on the market today,” said Schumacher, noting that the devices used advanced construction to efficiently produce intense, evenly distributed irradiance at specific wavelengths without dangerous heat.

And the NASA-initiated research not only advanced scientists’ understanding of different wavelengths’ ability to penetrate the body and elicit cellular responses but also included some of the first experimentation on optimizing doses with different intensity levels and treatment times, said Schumacher.

Devices that aren’t built on this knowledge “are just light bulbs,” she said.

After Ignatius’ death, Schumacher started working at Multi Radiance Medical Inc. of Solon, Ohio, which produces light-therapy devices for physical therapy, sports medicine, veterinary applications, and more. The company was founded in 2006 and has incorporated many of the findings from NASA and partners.

Before NASA’s involvement, light therapy devices were entirely laser-based, making them unsafe for home use, said Johnson. “So it was only available at clinics. NASA made it simple, accessible, easy to use, and safe.”

Multi Radiance started out making large, stationary devices for clinics, but as the company began following the WARP example with handheld, cordless devices around 2010, it was able to move into both the home market and veterinary applications. “If you’re treating a horse in a barn, you can’t have cords and plug in a console,” Johnson pointed out. Some of the company’s veterinary devices also use blue light for treating infections and other antibacterial applications, which the FDA still hasn’t cleared for use on people.

The company’s business is now evenly split between home devices and the stationary units still used by physicians, athletic trainers, physical therapists, and chiropractors. The devices vary by coverage area, power level, and wavelength combination, and some add electrical stimulation or magnetic fields to increase light absorption. Human applications are primarily for relief from pain, inflammation, and stiffness.

Multi Radiance now has almost 50 employees and sells tens of thousands of devices each year in 32 countries, said Johnson.

He credited NASA with advancing and popularizing the field by taking a chance on a possible treatment for inhibited healing and atrophy in space. “It wasn’t until NASA took a hard look and said it might work that you started seeing commercial development,” Johnson said. “They went after something no one could treat and found something so simple and easy it’s incredible.”

Now Multi Radiance is expanding its consumer line, with a second-generation home device planned for release in 2022.

As the science becomes better understood, Johnson said, the company also hopes to advance more specific medical applications. For example, Multi Radiance has patented an LED-arrayed eyepatch for treating disorders like diabetic macular edema, as well as a device for reducing symptoms of fibromyalgia. Both are in clinical trials.

“But even as the biological effects of light become clearer,” Johnson said, “it’s hard to say what mechanisms of action are at work. Light works on so many different conditions it’s hard to identify just one underlying mechanism, but we’re getting closer.”

Abstract
Multi Radiance Medical Inc. of Solon, Ohio, builds light-therapy devices based in part on NASA-funded research. Though health benefits of exposure to certain wavelengths were known, experiments that Marshall Space Flight Center helped fund, with an eye toward addressing atrophy and inhibited healing in space, lent credence to the field and established the effectiveness of LED arrays for safer, portable devices. 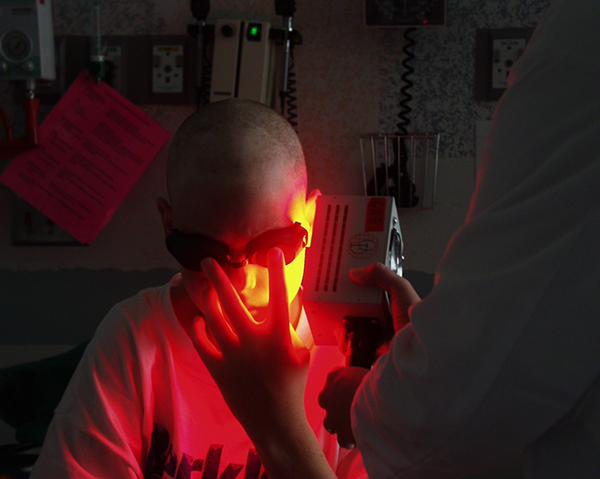 In the 2000s, NASA and a company called Quantum Devices worked with the Medical College of Wisconsin and the University of Alabama on clinical trials for light-therapy devices to treat side effects of radiation and chemotherapy in cancer patients preparing for bone marrow transplants. The devices successfully reduced painful oral mucositis sores caused by the cancer treatments. 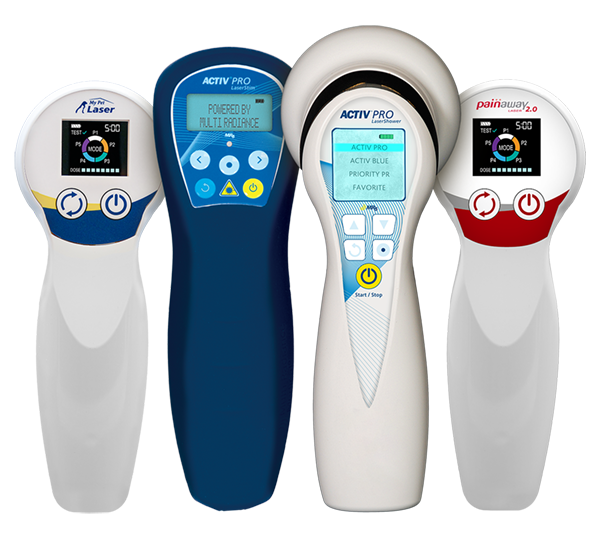 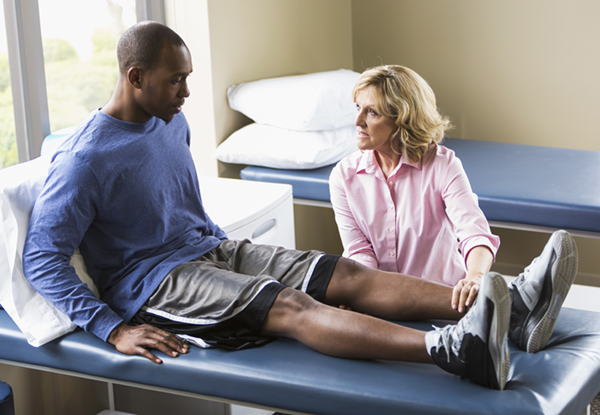 Many of Multi Radiance Medical’s customers are athletic trainers, physicians, physical therapists, and chiropractors who use light therapy in their practices. The technology’s applications are primarily for relief from pain, inflammation, and stiffness. Credit: Getty Images 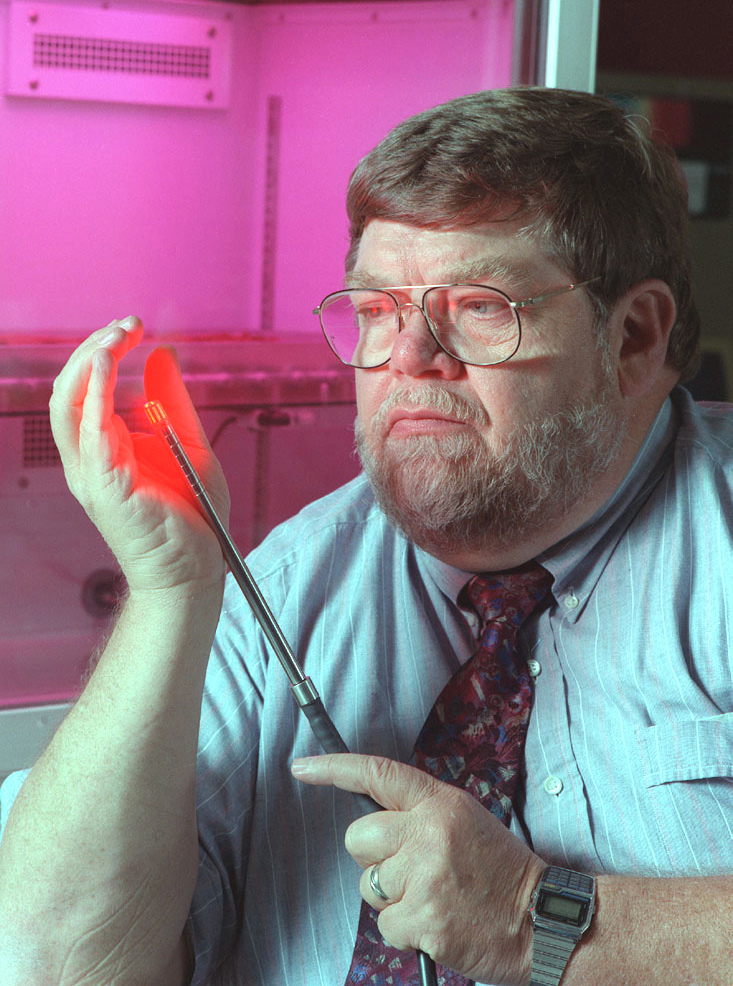 The late Quantum Devices founder Ron Ignatius holds what he referred to as a “photon cannon,” capable of delivering a full watt of energy from LEDs alone. Marshall Space Flight Center partnered with Quantum Devices and others to explore the health benefits of certain light wavelengths and prove they could be effectively delivered by LEDs, giving rise to a light-therapy industry. Credit: NASA