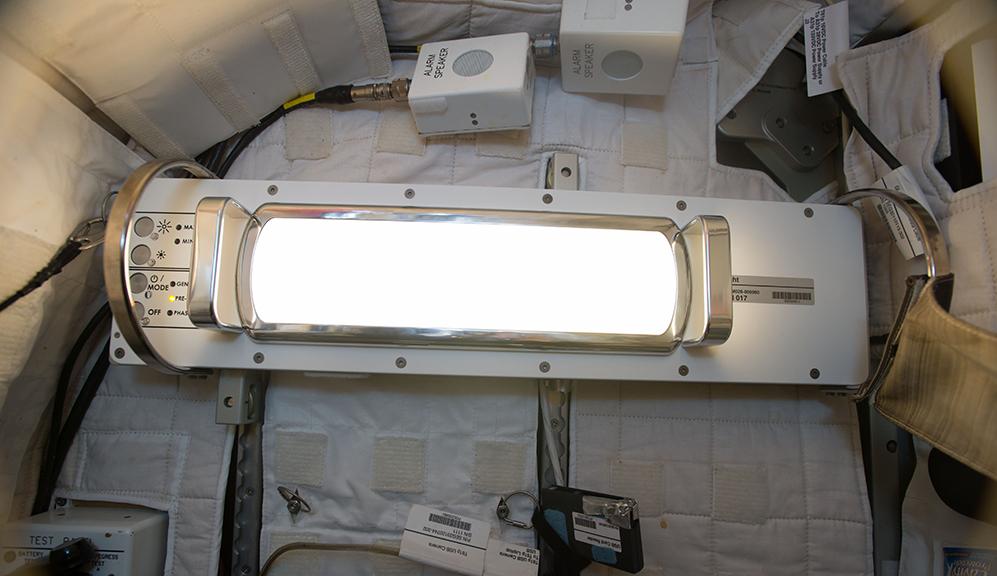 John Glenn’s first trip into Earth orbit lasted just under five hours, but today astronauts regularly stay six months or longer on the International Space Station. Experiencing over a dozen sunrises and sunsets each day means an astronaut’s biological clock tends to be in the wrong time zone. And for longer deep space missions, NASA needs to develop ways to grow food without relying on sunlight.

NASA-funded research to understand how light affects humans and plants, however, has had benefits far beyond space. It has helped develop biologically oriented LED technology for everyday life on Earth.

Lockley and Brainard’s research found that exposure to excess blue light at the wrong time could throw off a person’s body. This happened because the body’s production of melatonin, a key hormone for managing circadian rhythms, was inhibited when certain wavelengths of blue light hit photoreceptors in the eyes.

When the fluorescent lighting fixtures on the space station needed to be replaced in 2011, NASA looked to the growing field of solid-state light-emitting diodes (LEDs). Solid-state means that there’s no physical reaction creating light, unlike an incandescent bulb or fluorescent plasma. In creating a new lighting system, the findings of the NSBRI’s research played a big role.

“When NASA started looking into [LED fixtures], the industry didn’t even have standards for solid-state lighting. They didn’t have any information, certainly not a lot of research on large-scale implementation of circadian lighting,” said Toni Clark, testing lead for spacecraft lighting at Johnson.

Researchers there and engineers at NASA’s Kennedy Space Center in Florida worked together on the Solid-State Lighting Assembly (SSLA) for the space station. The lamp module was primarily built by Bionetics Corporation, which also had labs and manufacturing facilities on-site at Kennedy. The new lighting modules, installed in 2016, consumed far less energy and emitted far less heat than previous fluorescent lighting on the station. In addition, they changed color, temperature, and intensity in a 24-hour cycle, in accordance with the NSBRI’s circadian lighting research.

The change paid off, as astronauts reported feeling better-rested. LED modules also helped in plant-growth experiments on the space station, with the lights providing the right wavelengths for photosynthesis.

Lessons learned from the space station lighting modules soon made their way onto the market. After completing the initial system, several members of the Bionetics team moved to another company called Lighting Science to keep working on solid-state lighting.

The company’s work with LEDs goes back to the early 2000s. Fred Maxik, the company’s CEO, had worked under a Space Act Agreement at Bionetics as an expert on lighting systems. The company developed a wide range of bulbs that reflected the NASA research for human health and plant growth. In 2018, Lighting Science spun off several companies, each developing technologies based on the original circadian LEDs.

Healthe Inc. (pronounced “healthy”) of Orlando, Florida, was one of the first. The company’s primary market is in LED bulbs designed for keeping circadian rhythms in check.

One product line, the GoodDay and GoodNight bulbs, is based off older designs originally made by Lighting Science, specifically tuned to emit wavelengths to induce wakefulness and sleepiness. Another line, called SunTrac, can be paired to an app or an outside light meter that automatically adjusts the light throughout the day.

More recently, Healthe began using its technology to assist in decontamination and air filtration. Designed to fit into a standard ceiling lighting grid, these systems use ultraviolet light, which inactivates pathogens, paired with a fan and filter. Instead of bathing a room in UV light, the units suck in air through an intake and into an internal chamber, where it’s blasted with rays in the shortest, most potent range of ultraviolet wavelengths, known as UVC. The air is then filtered before it comes out into the room. NASA has explored this technology for potential use in future spacecraft, but the company was able to leverage the knowledge gained from designing UV-capable LEDs for growing plants in space.  Healthe has installed its UV systems in buildings that, since the COVID-19 pandemic started, have been looking to expand their santization protocols.

“The bulk of our [decontamination] sales today are to senior living communities,” Maxik said. “But we do work with office buildings, schools, anywhere that can support large-scale lighting systems.”

Another Lighting Science spinoff that has capitalized on that company’s experience working with NASA is VividGro of Chicago, which primarily sells to industrial cultivators.

This technology also has its origins in the LED lighting designed for the space station. Like the space station lighting array they’re derived from, VividGro’s lamps use specific wavelengths to induce biological reactions in living organisms. Instead of managing human biorhythms, however, they’re tuned exactly to the right frequencies to power plant metabolism.

Because LED technology is so efficient, they also use much less energy than other options, consuming nearly 50% less electricity than that of high-intensity discharge lamps previously used in greenhouses.

The company’s FlowerMax line is intended to provide for flowering plants, while the VegMax lights are designed for growing vegetables like lettuce. In 2021, the company was acquired by AgTech Holdings, and its products are exclusively distributed by the controlled environment agriculture company GroAdvisor.

Even after more than two decades of development, Maxik believes there’s a lot more that can be done with LEDs.

“This is still an adolescent business in my view,” Maxik said. “Saving watts per unit doesn’t take into account all the other properties we can associate with light. We can now manipulate that freely and use it to help people.”

Abstract
Many companies have benefited from NASA-funded lighting research and development aimed at growing plants in spacecraft and helping astronauts adjust to space travel. Products based on these technologies help people feel more energetic during the day, decontaminate rooms, and boost indoor agriculture production. 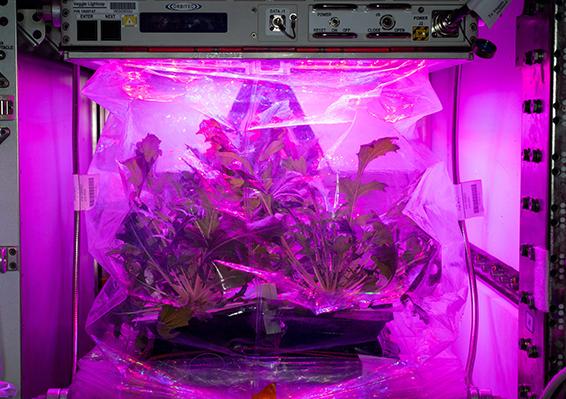 NASA has done several experiments with growing plants in orbit on the space station. The Veggie system uses LEDs to provide the kind of light that plants need. Credit: NASA 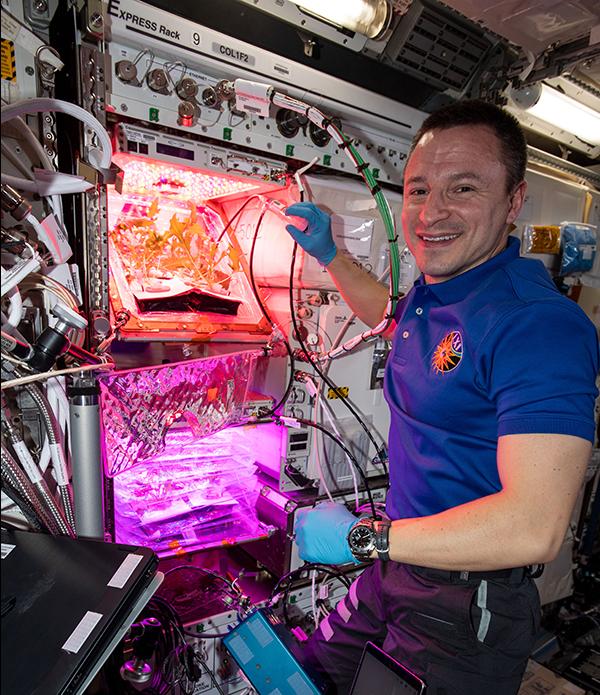 Astronaut Andrew Morgan waters plants in the Veg-04B experiment on the space station. This space botany research is one of several studies into how to provide fresh food for crews on long-term space missions. Credit: NASA

Engineers who worked on the SSLA went on to work for Lighting Science, which spun off several firms. Healthe continues to make adjustable LED circadian rhythm lights, as well as the Healthe Air sanitization system. Credit: Healthe

Plants flourish under certain kinds of light, so LED systems made by VividGro provide the right kind of lighting for industrial cultivators of plants and vegetables. Credit: GroAdvisor