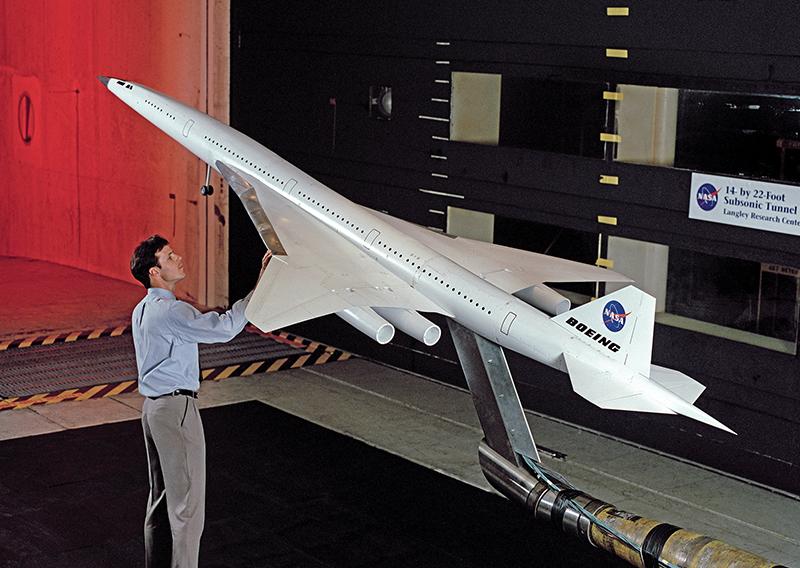 It’s as true in tech as it is in ancient fables: the little guys can get things done. A dehydrated gel to keep your drinks cool, a cooling system for supercomputers and a polymer for medical implants – through the Small Business Innovation Research(SBIR) program, NASA-backed technology is seeing new life.

SBIR contracts, and later their Small Business Technology Transfer (STTR) contract cousins, began in the 1980s as a project of the Small Business Administration, promoting the development of cutting-edge technologies to benefit both government agencies and private industry. This annual, multi-phase research funding enables small companies to develop technology that’s of interest to NASA — and the companies can then use what they learn to develop products with wide-ranging benefits.

The agency selects technologies that have potential commercial and government applications, but many require more time, investment and development than would allow private investors to realize returns. Sometimes it can take years of research and development, and some projects may never materialize. But as these examples show, technologies that undergo risk-reduction and products that are developed with SBIR funding can also eventually become hugely profitable as well as advance NASA missions and research.

In the 1990s, NASA was researching ways to move people and cargo at extreme speeds. While supersonic airliners like the Concorde were around back then, tickets were very expensive. NASA’s High-Speed Civil Transport research program looked to bring such high-speed travel to the mainstream.

Robert Bryant, an engineer at NASA’s Langley Research Center in Hampton, Virginia, explored materials for building more durable aircraft composites and adhesives. These polymer composites would be able to withstand the stresses of sustained supersonic air travel for much longer than traditional materials. Imitec, a small materials manufacturing firm in Schenectady, New York, received SBIR contracts to produce samples of the NASA resins and realized that, with modifications, their durability could be useful in other areas.

“The Langley work was developed for composites and adhesives,” Bryant said. “And there were some aspects of the NASA resin chemistry that would allow the polymer to be used in other technologies.”

When visiting Langley, an Israeli medical company named MMA Tech saw potential in the polymers for hip replacements. If the material could withstand the environmental stresses from aerodynamic forces in jet aircraft, similar formulations could be just as good at resisting wear from joints in the human body. Imitec’s two phases of SBIR research helped pave the way for a new polymer called MP1. Like the other NASA polymers, MP1 was durable and wouldn’t interact with the body, which made it ideal for use in medical implements. With a supplier guaranteed, MMA Tech contracted with Imitec to obtain MP1 for its research.

Jack Keating, president of Imitec, said the trials of MP1 implants in Israel sparked further interest. MP1 hip replacements have been implanted into patients in New Zealand, and research found that the polymer’s chemical makeup makes it especially safe for implantation because it resists viral and bacterial growth. Keating said further research is being done to determine if the material could be used in widespread medical implants.

NASA’s work with materials science doesn’t end with airplanes. Thermal protection systems are vital to protect spacecraft and astronauts from the incredible heat that builds up during atmospheric entry. Without heat shields, rovers couldn’t land on Mars, and astronauts couldn’t return safely from the International Space Station. The important job of testing these shields and ensuring they stay strong and functional is the responsibility of scientists at NASA’s Ames Research Center in California’s Silicon Valley.

In durability testing at the Ames Arc Jet Complex, temperature sensors called thermocouples are embedded in the heat shields. While durable, these instruments can only measure temperatures in specific parts of the shield and are highly susceptible to electromagnetic interference. Researchers wanted to get more information and turned to the SBIR program for solutions.

Intelligent Fiber Optic Systems (IFOS) Corporation of San Jose, California, has been working on high-precision temperature and pressure sensor systems for more than 20 years with the help of SBIR funding from NASA and other agencies. As its name suggests, IFOS deals in fiber optics — thin strands of glass that use light to transmit data. Fiber optics present more opportunities for distributed data collection than traditional temperature sensors made from metal, in particular because “you can take measurements at different locations than where thermocouple wires are located,” said Ethiraj Venkatapathy, senior researcher for entry systems at Ames.

IFOS’s sensors are special micro-holograms etched into thin strands of glass wire. These holograms, known as fiber Bragg gratings, reflect light differently based on the temperature and strain in the surrounding area. When light is guided through the fiber optic cabling, a specialized computer can read the levels and spectral wavelengths of the reflected light to provide real-time temperature readings at the locations of the micro-holograms distributed along the fiber.

Because the system is based on glass fibers, rather than metal, it’s also immune to electromagnetic interference.

Two 2010 STTR contracts from Ames funded the development of special, high-temperature versions of these sensors for heat shield testing and tested them up to more than 3,200 degrees Fahrenheit. The sensors were able to read temperature changes more quickly than thermocouple-based sensors, and they allowed all electrical wires to be replaced with a single optical fiber, said IFOS’s Chief Scientist Richard Black.

IFOS has now sold a product based on this technology to a major U.S. semiconductor equipment manufacturer that’s exploring how these high-temperature sensors can improve its manufacturing processes and reduce factory downtime. Semiconductor construction requires extreme precision, such as heating tiny points across silicon wafers. IFOS President and Chief Commercial Officer Mehrdad Moslehi said the company’s heat-sensing technology could be a game-changer for such production tools and processes, ensuring the necessary equipment operates reliably and enabling intelligent preventive maintenance and equipment diagnostics.

Ensuring that sensitive equipment is the right temperature is important when working with high heat, but sometimes you have to keep things cool, such as computers in a data center. Now a technology originally invented for spacecraft engines is doing just that.

One of the most important elements of rocket design is ensuring that fuel is constantly flowing to the engines. Most of the pumps that do this use a whirring piece of metal to push fuel from one tank into another, but Steve Harrington, president of Flometrics, designed a pump that didn’t have any moving parts at all. His ”pneumatic ejector” uses pressure to push the fuel from one chamber to the next, and then out of the pump.

During the late 2000s, NASA was looking for a fuel pump to use in control thrusters for both a lunar landing module and small satellite launch rockets, so Flometrics applied for an SBIR with NASA’s Glenn Research Center in Cleveland to complete its fuel pump research.

By the end of Flometrics’ Phase I SBIR contract, the company’s pump could cycle two gallons of liquid nitrogen per minute through a test loop. The pump showed promise for the launch vehicle application, as it was far lighter and more reliable than other designs NASA was considering at the time. And while the research ultimately did not produce a rocket, the project would soon take a different turn, into keeping computers cool.

“Half the energy that goes into a data center is for air conditioning. That means data centers are 50% efficient, only half the energy goes into the computers. If planes were like that, we’d have to land in Hawaii every time we flew to Japan,” Harrington said. “That offended my thermodynamic sensibilities, so I came up with a liquid computer cooling system.”

Flometrics soon received another SBIR from the Defense Advanced Research Projects Agency to address these new applications, and the efforts were spun off into another company, Chilldyne of Carlsbad, California. Chilldyne’s design traces its lineage back to that original fuel pump proposal, only instead of rocket fuel flowing to powerful engines, coolant is pumped across the processors of large computer hardware.

Harrington said the original NASA SBIR proved that a multi-chamber pump like this could be scalable, and the pump has clear benefits for any large computing center. With liquid cooling the processors directly, and without any moving pieces of hardware, electricity costs can be pushed way down. Tests at the Department of Energy with a similar system saw power use drop by just over 20%. As of 2020, Chilldyne has 18 full-scale cooling systems installed at three massive data centers, including some at Sandia National Laboratories.

Maintaining the right temperature is important for applications both on Earth and in space, but not all SBIR research ends up in aerospace or computing. Sometimes it’s just to make a nice drink.

Aerogel was first created in the 1930s. When the liquid component in a gel substance is replaced with air, the material gains incredible insulating properties while becoming nearly weightless. NASA has researched aerogels for various purposes, ranging from sample collectors to protecting Mars rovers from the elements.

Under SBIR contracts from NASA’s Kennedy Space Center in Florida in the 1990s, a company developed the first practical aerogels in the form of durable, flexible blankets to keep rocket fuels cool. Aerogels have been spinning off into myriad commercial applications ever since.

Now outdoor equipment company CamelBak, headquartered in Petaluma, California, is using aerogel from that same company for a different kind of heat insulation. Instead of keeping rocket fuels in liquid form, the Podium Ice water bottle keeps liquids at a stable temperature for hours.

“Our thinking was, what’s the best passive insulation possible so a bicyclist can get the best bottle possible?” said Derek Campbell, senior director of product development at CamelBak. Because of this stability, CamelBak hopes to include the aerogel design in a wider range of water bottles, including ones built to military specifications.

Starting with a comparatively small investment of $500,000, aerogel now generates millions of dollars in annual revenues and is disrupting industries.

It, like the other examples in this story, shows how small businesses can make amazing technologies for NASA that have even further-reaching benefits for the rest of us. Research for rocket plumbing resulted in computer coolers, materials for supersonic jets can help people walk, and even your water bottle could have some aerospace tech. For companies looking for a boost, the SBIR program could be their ticket to the stars.

Aerogels are the lightest solid known to man, and one of the greatest insulators, but it took NASA investment to develop a form that was easy to use. Now it’s used extensively in aerospace, as well as in consumer goods. Credit: LYagovy via Getty Images 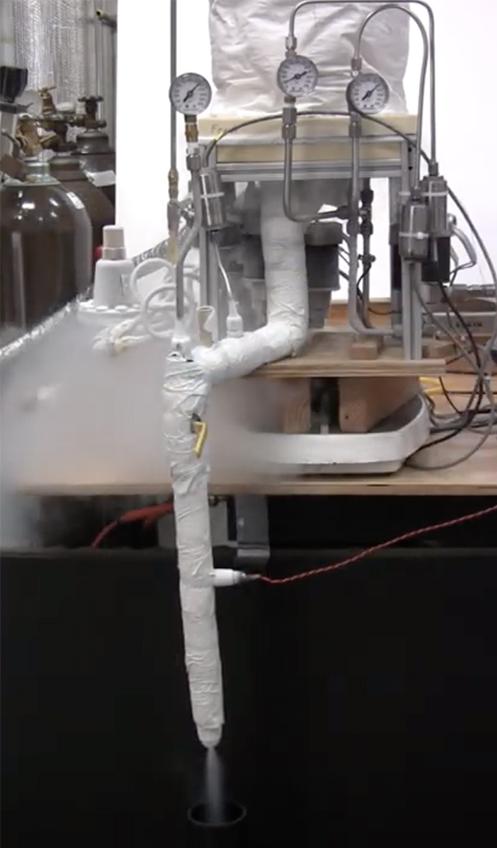 This demonstration of the Chilldyne cooling system pumps coolant from three chambers into adjacent servers. Changes in pressure between the chambers cause fluids to flow through the loop. Credit: Flometrics

In the 1990s, Langley Research Center was looking for polymers to make building and operating supersonic airliners more viable. Now, a derivation from that materials research called MP1 is being tested in hip replacements. Credit: NASA 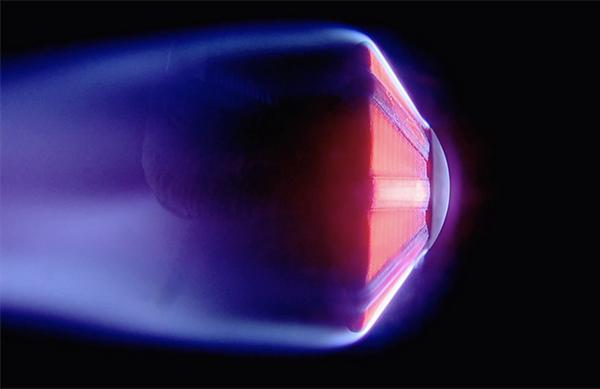 IFOS’s fiber optic thermal sensors were designed to be embedded in heat shields for testing at the Ames Arc Jet Facility (pictured), but their extreme heat resistance makes them perfect for use in semiconductor manufacturing. Credit: NASA Ames Video Group