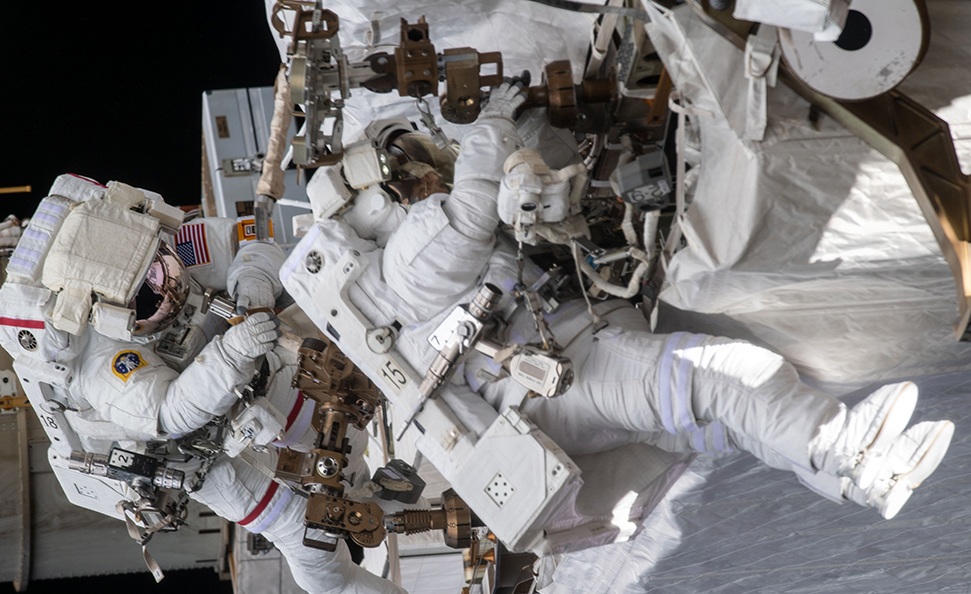 Technology developed for space has turned up in cars for years. From space shuttle tire engineering ending up in road tires to zero-gravity body posture studies helping make comfy car seats, decades of space development have resulted in better cars. Now a technology originally designed for spacesuits is being used to make temperature-regulating underwear for the people who drive the fastest vehicles on land.

For spacewalks to even be possible, spacesuits need major insulation and temperature controls to withstand temperature swings between 250 and minus 250 degrees Fahrenheit. In the 1980s, NASA’s Johnson Space Center in Houston entered into a Small Business Innovation Research (SBIR) contract with the Triangle Research and Development Corporation to develop a glove material that would help maintain a steady, comfortable temperature. The secret was found in phase-change materials.

Phase-change materials absorb and release heat through basic characteristics of matter. As surrounding temperatures rise, the heat the material absorbs melts it from solid to liquid. This works in the opposite direction as well, releasing heat as the material solidifies again. No matter what phase it’s in, in either hot or cold environments, the temperature stays around the melting point. This ensures that the material, much like Goldilocks’ porridge, always feels just right.

Triangle’s work for NASA successfully incorporated microcapsules containing a phase-change material into a synthetic-fiber insulating material for a spacesuit glove insert. The inserts never made their way into orbit, but to the engineers who developed them, they showed much promise.

In the 1990s, the company Gateway Technologies, now known as Outlast Technologies, acquired exclusive patent rights from Triangle to incorporate phase-change microcapsules into insulation and began developing new techniques for using them in all kinds of fabric. Working with many different partners, Outlast has incorporated its “Thermocules” into outdoor gear, bedding, infant swaddling, and sportswear, and other clothes. One of its partners brought Outlast to a different kind of sport altogether: motorsports.

In the competitive world of auto racing, fractions of a second can mean the difference between losing or taking home the cup. Many race teams shave their lap times down through engineering, such as better aerodynamics or reducing the weight of the car, but comfort tends not to be a priority. Race cars often don’t have amenities like fans or air conditioning, so their interiors can reach upwards of 120 degrees Fahrenheit.

Sitting in her boiling car before a race, amateur racer Fiona James thought there might be some way to make the experience a bit more bearable. She believed the key might be in the specialized clothing worn by all race drivers: full-body undergarments. The existing options for race underwear used a technique called wicking to keep racers from getting sweaty, but James found them lacking. James founded Cambridge, England-based Walero in 2014, and her search into temperature-regulating materials brought her to Outlast.

Outlast has been used in underwear before, but race undergarments have some distinct differences. In a race car, there’s always the risk that a crash or mechanical trouble could result in a fire. Ensuring that the Walero race wear was flame resistant was an important design challenge, but by bonding the Outlast to a layer of a fire-retardant material, the company was able to conform to all the necessary regulations set by the sanctioning body of international motorsports, the International Automobile Federation (FIA), as well as the safety standards laid out by the U.S.-based SFI Foundation.

But the minds behind Walero thought the product needed more testing, beyond just meeting safety regulations. With the designs completed, the company wanted to ensure its product would work in a real-life situation. “To do that, we had to run simulations,” said James.

FIA regulations for the World Endurance Championship branch of auto racing say the temperature inside a car can’t exceed 95 degrees Fahrenheit for very long. Using a motion simulator, the company exposed drivers to these high temperatures while they drove virtual laps. In half of the tests, the driver wore a more typical fire-retardant underwear, and in the other, they wore the underwear with phase-change materials. In the tests with phase-change materials, the driver had a lower core temperature and heart rate and made fewer mistakes behind the wheel. The overall result was a faster, more consistent lap time, with no engineering changes to the vehicle.

James says Walero’s products have been adopted by drivers across all levels of racing since they hit the market in 2015, including IndyCar and the European Rally Championship. In 2019, the FIA GT World Cup winning team, W Racing Team, acquired the race wear for their GT car drivers, and Walero’s American distributor, HMS Motorsport in Mooresville, North Carolina, has sold it to both amateur racers and professional NASCAR drivers.

Endurance racers with specialized cars have reported successes with the phase-change underwear, with racers driving over 500 miles and reducing sweat rates by up to 40%.

One thing that the team at Walero have noticed is the interest from people outside the world of motorsports. “I’ve sold it to hikers who wanted to keep warm on a walk,” James said. “I also sold Walero once to someone who was going through menopause, to stabilize her temperature.”

The company plans to launch other Outlast-based products in the near future, but its primary market is still racers looking for a way to get an edge against the competition. 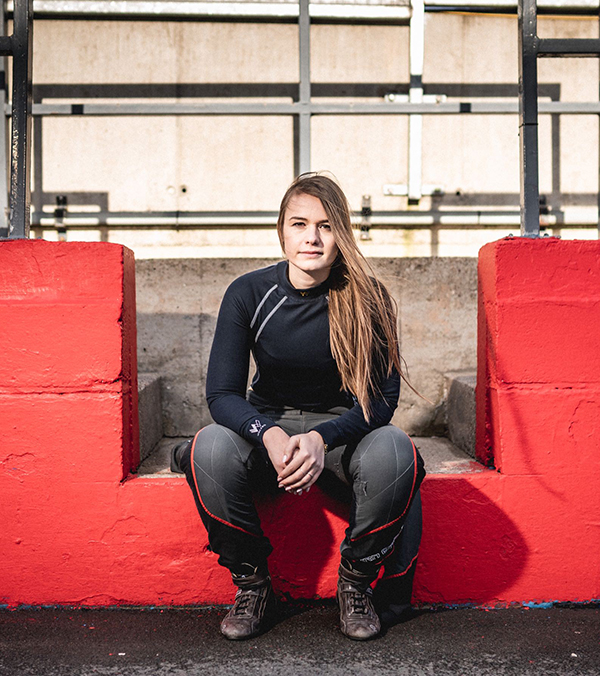 Due to extreme temperatures in the cockpit, drivers in almost every major racing championship wear Walero for its cooling properties. Cristiana Oprea (pictured) wears it while driving for the European Rally Championship. Credit: Walero 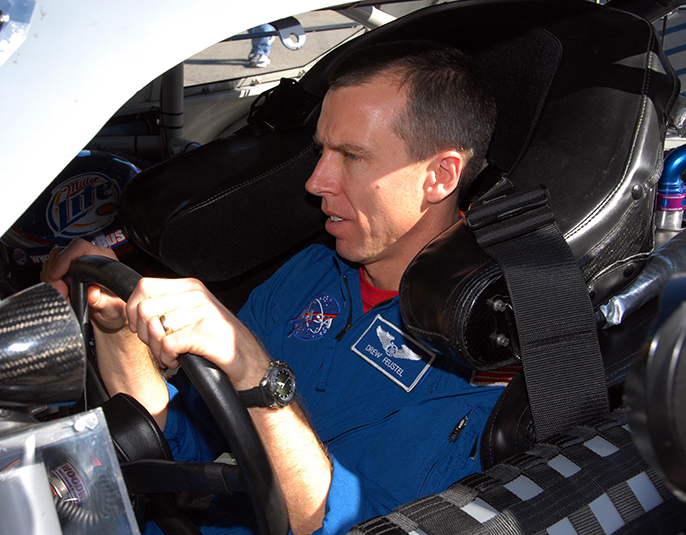 While astronaut Drew Feustel isn’t wearing a spacesuit behind the wheel of this NASCAR racing vehicle, developments in spacesuit technology have seen adoption in auto racing. In the 2021 NASCAR season, several drivers are wearing undergarments made by Walero that utilize phase-change materials originally designed for NASA under an SBIR contract. Credit: NASA 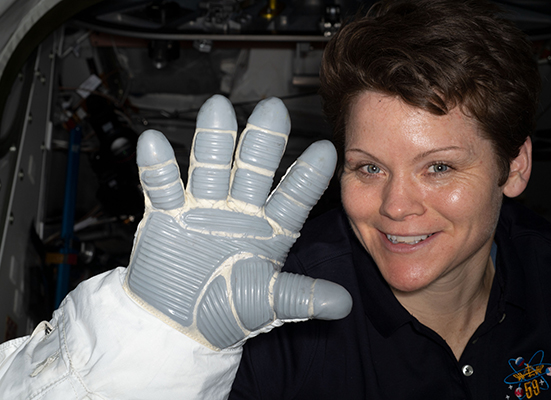 Spacesuit gloves (above) have to be both dexterous enough to use tools and insulating enough to protect against the temperature extremes of working in space (below). Working with industry, NASA explored the use of phase-change materials for these purposes, which was later commercialized under the name Outlast. Credit: NASA