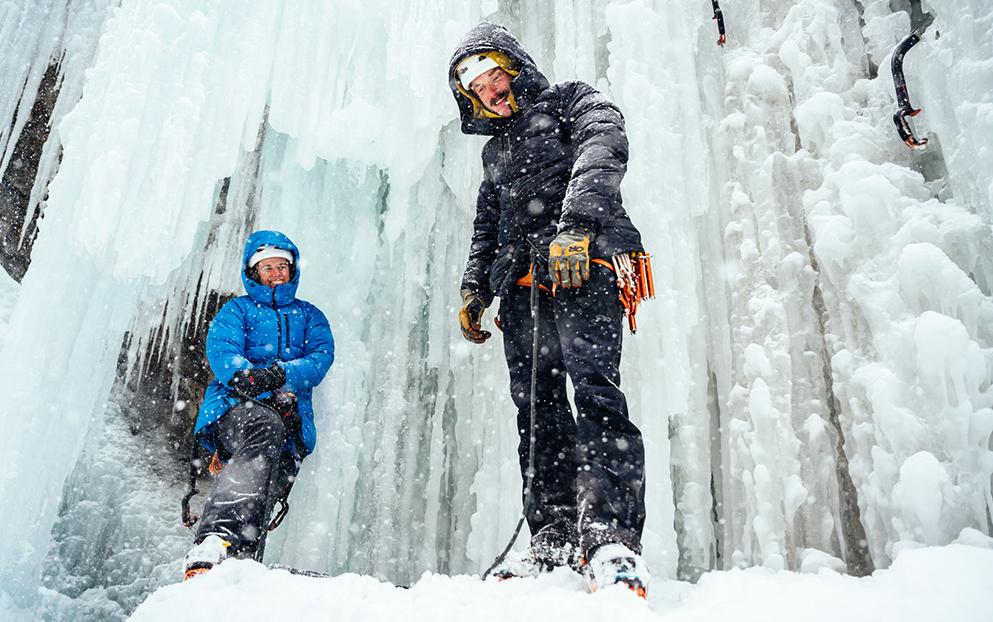 Not everyone would celebrate the new year camping out in the Rocky Mountains during some of the longest, coldest nights of the winter. But that’s how Jon Rosenberg and his wife rang in 2018, and they learned the hard way that the outdoor gear market still didn’t entirely take such extreme conditions into account. In just one day, the cold killed the batteries in the camera his wife, a professional photographer, brought with them.

“Other insulated products will keep groceries cold for a week, but if all you need is to keep batteries or a snack from freezing, there’s not much of a solution,” he said. But Rosenberg, who worked in the outdoor gear industry, knew of a class of high-performance insulation pioneered by NASA to keep cryogenic rocket fuel chilled to minus 423 degrees Fahrenheit in the balmy heat of Florida. The key to these insulators is a substance called aerogel.

The first aerogels were invented before NASA even existed. They’re made by removing all the moisture from a gel – usually made of silica – while leaving the solid structure intact. The resulting material is almost entirely air, pocketed in tiny chambers. It weighs next to nothing and is nearly impervious to heat. However, until NASA got involved, it was also too fragile to use.

In the 1990s, NASA’s Kennedy Space Center in Florida was looking for better insulation to maintain the frigid temperatures needed for storing space shuttle fuel.

The best cryogenic insulations at the time were layered metallized thin films, invented by NASA in the early days of the space program. These reflected radiated heat and could be placed in a vacuum to prevent heat conduction or convection. But they were relatively expensive and heavy, and their ability to conduct heat along their surfaces caused complications.

A company called Aspen Systems, however, had an idea for incorporating aerogel into flexible insulating blankets.

With Small Business Innovation Research (SBIR) funding from Kennedy, and then from a handful of other NASA field centers, Aspen developed a process to coat insulation fibers with aerogel to trap air while also stopping heat conduction.

First, Aspen treated the fibers, both to make them reflective and to help them bond with an aerogel. Then it soaked them in a liquid aerogel precursor material and flash-dried them at high temperature and pressure to turn the liquid to solid aerogel. Every fiber in the resulting blankets was enveloped in air-filled aerogel, preventing the fibers from touching each other to conduct heat. Moreover, the air molecules trapped in the aerogel’s countless microscopic cells also couldn’t touch each other to transfer heat, and they couldn’t move across the insulation or even escape when it was squeezed or soaked.

The process was developed and honed over about 10 years and 10 NASA SBIR contracts. Today the space agency uses aerogel in myriad ways, and Aspen Aerogels has spun off to specialize in what became one of the most successful, widespread spinoffs in NASA’s history, incorporated into a host of outdoor wear, building and industrial insulations, and more. And like many of the agency’s most successful inventions, aerogel-infused insulation has spun off well beyond NASA, spawning partnerships and product lines that are two or more degrees removed from the original work but still owe their existence to NASA’s need-driven investment.

One company that’s recently entered the aerogel market is Latham, New York-based PrimaLoft, a brand known for high-performance insulation since the 1980s. The company worked with Aspen Aerogels on the initial development of its own lines of aerogel insulations. Today that decision is paying dividends in bulk: scores of brands are already using this newest spin on NASA’s early forays into aerogel to make warmer outdoor gear.

PrimaLoft began purchasing aerogel blankets from Aspen, enclosing them in a film to trap any dust and make them easily manageable, and cutting them down to fit in boots and other gear to meet client demand.

This became the PrimaLoft Gold Insulation Aerogel line, and it’s what Rosenberg chose for his new startup, Cold Case Gear, through which he aims to build a line of pouches that will protect small essentials like batteries, electronics, and snacks. Because it traps air more effectively than traditional materials, the insulation can be thinner while retaining performance, making it ideal for little cases, he said.

The insulating power of aerogel lets the case have a simple construction with just three layers of material, rather than the four to 10 layers used in competing products that still shouldn’t be left in a hot car, Rosenberg said. “Our products are so highly insulating that you can definitely leave them in a car.”

He said he ultimately plans to expand to 10 or 12 products, all manufactured in Colorado. He said he wanted to keep jobs local, ensure quality, and minimize the carbon footprint from shipping products.

Another outdoor company that uses this new iteration of aerogel blankets in several products also began with a mountainside insulation failure. Outdoor Research, headquartered in Seattle, started after its founder’s climbing partner had to be airlifted off Denali due to frostbitten feet in 1980. The company started out making footwear for the most extreme winter climbing, and in 2019, it updated that product line with aerogel insulation, also adding the material into gloves, campsite footwear, and a beanie.

Encapsulated aerogel insulation is not well-suited to insulating an entire jacket, noted Alex Lauver, the company’s director of commercial innovation, because it is stiff and lacks breathability. But because it’s thin and forms a thermal barrier even under high pressure, he said, the material is ideal for smaller areas that get pressed against cold objects like metal tools or ice – specifically, the hands and feet.

More recently, PrimaLoft created a new twist on NASA-pioneered aerogel insulation with a line called Cross Core, for more general-purpose use in outdoor apparel. When Bob Dempsey, now PrimaLoft’s lead aerogel engineer, got a chance to examine by-products from the manufacturing process Aspen had developed with NASA, he had an idea. “It looked a lot like the graphite ceramic material we infused into fibers in the past," he said. "I wondered if we could do that.”

Rather than fixing aerogel around and between fibers, as Aspen had done for NASA, the company figured out how to infuse aerogel particles into the inside of ultra-fine fibers. The result is a fluffy, soft, breathable insulation with 15 to 20% better thermal performance than synthetic fibers without aerogel.

While PrimaLoft works with a variety of suppliers for aerogel particles, Dempsey said, “working with Aspen was crucial to the early development of this first-of-its kind technology.”

Ken Fisk, PrimaLoft’s global communications manager, said the development lets a jacket perform better for its weight and thickness, and retain that performance when wet or compressed.

SITKA, now a subsidiary of W.L. Gore & Associates and headquartered in Bozeman, Montana, was founded in 2006 to bring the hunting apparel industry up to speed with modern mountaineering gear, said John Barklow, the company’s big game product manager.

Its first Cross Core-insulated item, the Kelvin Aerolite 30 sleeping bag, rolled out in the summer of 2021. Meant to double as a campsite garment, it incorporates features like a hood and armholes.

When traditional down insulation is compressed or gets wet, the feathers collapse and can no longer hold air. Aerogel-infused insulation is different, Barklow explained. “Even if it’s compressed, you still have air being trapped inside those strands, so you’re not just relying on the physical loft of the garment,” he said. “It lets it keep amazing heat retention.”

SITKA decided to replace the treated down in all its warmest jackets with Cross Core shortly after releasing the Aerolite sleeping bag. Barklow said the aerogel material performs as well as traditional insulation in dry conditions – and better when wet – at half the thickness and considerably less weight. “It increased both mobility and performance.”

Decades after the space agency made a relatively small investment in a new kind of insulation for cryogenic rocket fuel, companies across various industries have continued to build on that invention, spinning it off into countless improved products, including gear that now lets the most intrepid adventurers push frontiers on Earth, much as NASA does in space.

In 2019, Outdoor Research began incorporating encapsulated aerogel into some of its gloves and footwear, where it insulates against contact with cold objects like metal tools or ice. Credit: Outdoor Research

In a demonstration, a thin aerogel-infused blanket from PrimaLoft protects against a hot iron. Credit: PrimaLoft 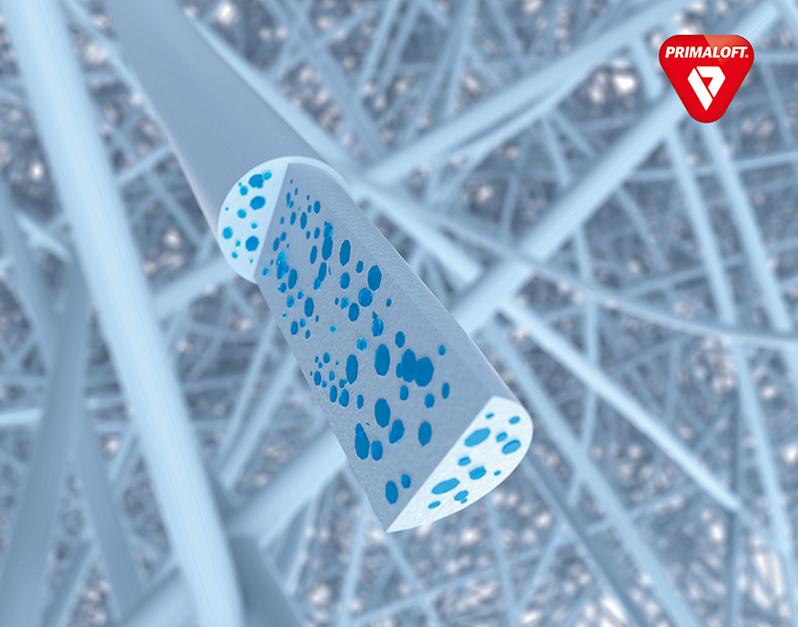 Beginning with aerogel dust collected from an Aspen Aerogels manufacturing facility, PrimaLoft figured out how to infuse tiny aerogel particles into ultra-fine fibers, resulting in its new Cross Core insulation, which is fluffy and breathable like traditional jacket insulation but has 15 to 20% better thermal performance. Credit: PrimaLoft

Outdoor Research started 40 years ago after the founder’s climbing partner got frostbitten feet. In 2019, the company introduced aerogel insulation into some of its gloves and footwear to further protect wearers’ extremities. Credit: Outdoor Research